Please ensure Javascript is enabled for purposes of website accessibility
Log In Help Join The Motley Fool
Free Article Join Over 1 Million Premium Members And Get More In-Depth Stock Guidance and Research
By Matthew Frankel, CFP® - Feb 23, 2018 at 7:03AM

The leading healthcare REIT has plunged by more than 30% in less than two years. Is it time to buy?

Leading healthcare real estate investment trust (REIT) Welltower (WELL 0.30%) has been a major disappointment for its investors over the past couple of years. The stock is down 31% since peaking in mid-2016.

However, the decline can be attributed more to economic conditions than to Welltower's business itself. Welltower's future still looks incredibly bright, so now could be a smart time to take advantage of the weakness. 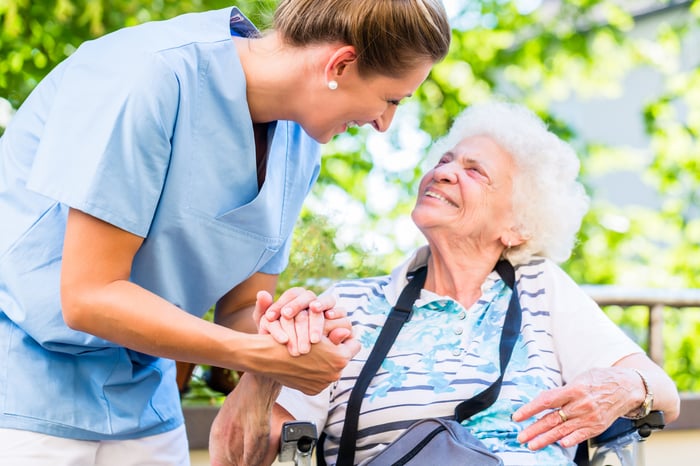 Welltower and most other REITs are on sale

While the overall stock market has delivered fantastic returns to investors over the past couple of years, that's not been the case for the real estate sector. Here's a look at how the S&P 500, Equity REIT sector, and Welltower have performed since REITs peaked in mid-2016.

Data Source: YCharts. Returns as of 2/22/18. Parenthesis are used to show negative returns.

There are a couple of reasons for the poor performance. For REITs, in general, the main culprit has been interest rates. Rising rates are generally bad for income-focused investments such as REITs. As the economy has heated up, bond yields have risen -- especially so far in 2018 -- and have put negative pressure on REITs.

In addition, there are some oversupply concerns in the senior housing market, which is Welltower's bread and butter, making up 71% of the portfolio. As I'll discuss in a bit, senior housing is a huge long-term opportunity, but there could be oversupply issues in the near term if properties are built too aggressively.

Welltower's business is stronger than the numbers suggest

To be fair, there were some reasons for disappointment in Welltower's most recent earnings report. The company missed FFO expectations by $0.03 per share, and next year's FFO guidance range of $3.95-$4.05 would represent a year-over-year decline from the $4.21 per share generated in 2017. So it's not terribly surprising that the stock took a mild post-earnings hit.

However, most of the decline is likely due to the company's ongoing efforts to reduce leverage, as well as its exposure to Genesis Healthcare as a tenant. In fact, in all of the company's business segments, Welltower expects same-store net operating income (NOI) to grow in 2018.

It's also important to point out that while the 2018 guidance accounts for $1.3 billion in expected property sales and other dispositions, it doesn't account for any acquisitions or developments beyond what has already been announced. For context, Welltower completed $334 million of investments during the fourth quarter of 2017 alone.

The point is that I'm not terribly concerned about the small drop in FFO guidance, as the company's deleveraging efforts are a great development from a long-term perspective and should add to financial flexibility to pursue future opportunities. Furthermore, since the current guidance doesn't assume any acquisitions whatsoever, I wouldn't be surprised to see the range revised upward later in the year.

An amazing long-term opportunity, and a big head start

While Welltower's stock has performed terribly recently, it's important to not lose sight of the big picture. Of the "big three" healthcare REITs -- Welltower, Ventas, and HCP -- Welltower is the most senior-focused, with about 83% of its portfolio composed of either senior housing or long-term/post-acute-care facilities.

Here's why that's important. The elderly population of the U.S. is expected to grow rapidly in the coming decades, and the 85-and-up age group is expected to double over the next 20 years. This will create a tremendous increase in demand for healthcare, specifically in Welltower's core property types. Currently, senior housing demand in the U.S. is growing at a rate of about 25,000 units per year. This is expected to nearly quadruple to 92,000 new units per year by 2025. Short-term oversupply worries aside, this is a massive growth opportunity. 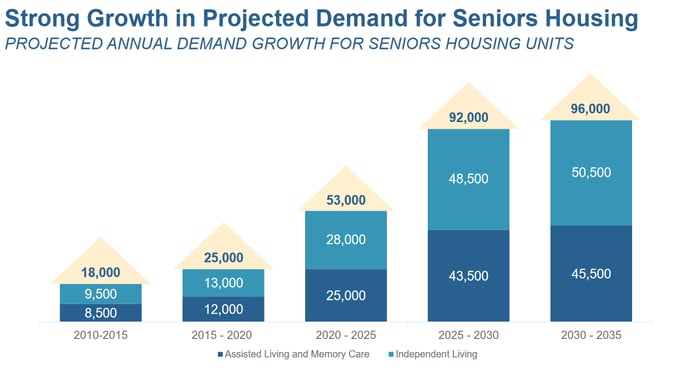 In addition, Welltower's size and financial flexibility gives it an edge when it comes to developing new properties to meet the growing demand, particularly in high-barrier urban markets, which are a major component of Welltower's long-term strategy.

In the roughly 17% of the portfolio that's made up of outpatient medical facilities, there perhaps is an even greater opportunity. Not only do seniors spend significantly more than the rest of the population on medical services, but just 11% of outpatient medical real estate is REIT-owned. More than half is owned by the health systems and physicians that use them, which is a huge opportunity for consolidation, with the largest and best-funded players (like Welltower) in the strongest position to capitalize.

Could Welltower continue to fall?

Of course it could. In fact, if interest rates and bond yields continue to move higher, that's exactly what I would expect. For example, if the 10-year Treasury yield jumps to 3.5%, I wouldn't be surprised to see Welltower drop another 10% -- although I think that's an unlikely scenario in 2018. However, as long as the weakness is due to external factors such as interest rates and nothing company-specific, this would be a welcome opportunity to buy even more from a long-term perspective.

As a final point, investors should take note that Welltower's ticker symbol is scheduled to change from "HCN" to "WELL" at the end of February. This is the next step in the company's branding efforts after its name change from Health Care REIT to Welltower.