In the race between the two popular athletic apparel stocks, one is clearly faster and stronger.

Even armchair jocks are familiar with the products sold by athletic-wear giant Nike (NKE -6.99%) and its younger rival Under Armour (UA -2.99%)(UAA -2.14%). The two companies are distinctive in the look of their gear and their approach to the market, but they're similar enough for a direct comparison.

So let's get this race started. Which of the two stocks is the better investment at the moment? On your marks, get set... 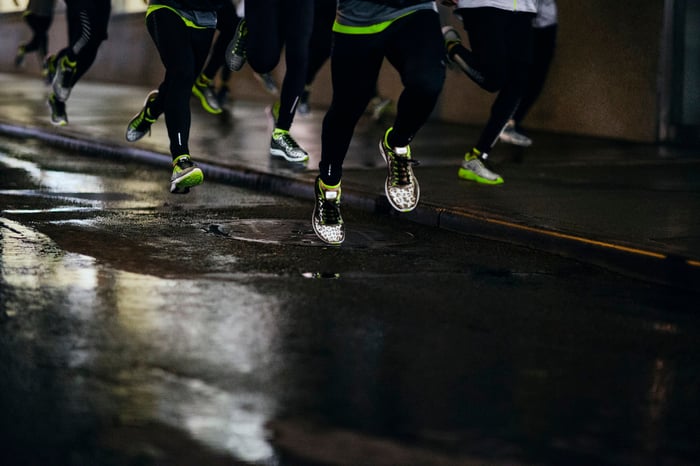 Broadly speaking, Nike is the incumbent American apparel maker, while Under Armour is the upstart. Nike is by far the larger company, in terms of key metrics like market capitalization, revenue, and net profit.

It's also the more consistent performer. Although its recent financials haven't blown the market away, the company always manages to land well in the black on the bottom line, at margins that have generally improved over the last decade or so. And for the most part, revenue has continued to head north. 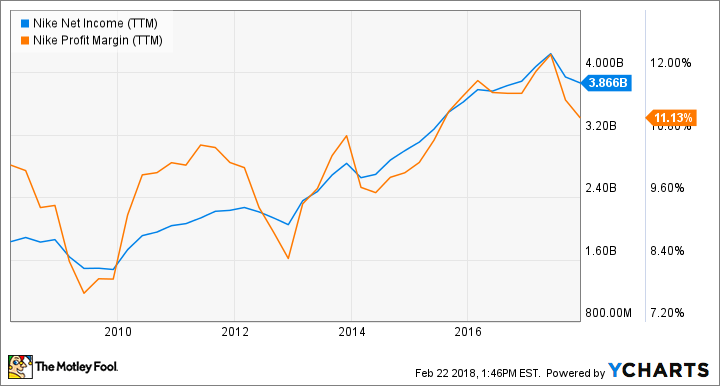 It's had more success abroad than domestically lately, however, following the success of a revitalized Adidas, in addition to difficulties in the retail sector.

But some of its foreign markets, like China, have really taken to its products, and are helping drive growth. Going forward, a raft of new product introductions and continued popularity abroad should help lift these fundamentals.

Under Armour isn't as consistent. The company was quite the sprinter, as far as its fundamentals and share price were concerned, earlier this decade. With smart product designs that wowed consumers and smart endorsement deals, the company at one point posted an astonishing 26 quarters in a row of 20%-plus sales growth.

But that was then, and this is now. Over its last two reported quarters, Under Armour's performance has lagged. In fact, in its Q3 it posted a year-over-year revenue decline of 5% -- which was a shock after that sustained growth spurt -- and saw its net income dive by almost 60%. Needless controversies engendered by CEO Kevin Plank's political statements last year didn't help endear the company to the world either.

The recently reported Q4 was a bit better on the revenue front, with the top line rising by 5%. But the company plunged into the red, posting an adjusted net loss of $579,000.

Why the shift in fortunes? As my fellow Fool Leo Sun explains, the tough conditions in the North American market resulted in a double-digit sales decline in the region in Q4. Like Nike, international sales are helping to pick up the slack, but Under Armour is still heavily dependent on this market, and isn't as well established as its big rival abroad.

Also, the company adopted a haphazard strategy of pumping money into the wearable fitness tech business, a market that wasn't particularly lucrative (it has since abandoned this initiative). It also made a push into both the high and low ends of the apparel market simultaneously, which is tough to pull off even for the largest and most seasoned retail-facing companies. It's hardly any wonder that Under Armour is struggling.

Meanwhile, Under Armour stock is still priced lavishly. Its five-year PEG ratio weighs in at nearly 15, which is asking investors to believe the company will again deliver its previously spectacular growth rates. Given the challenges it faces and its questionable way of answering them, I wouldn't be all that optimistic.

Meanwhile, Nike is a sound and consistent performer that's doing a better job of getting through this period of weakness in its native market. Those upcoming products have a chance at revitalizing the company's North American operations as it continues to build strength abroad. And its PEG is much saner, at under 4. So the victor in this stock vs. stock race, by several paces in my view, is Nike.