Shares of the Swoosh have finished strong, but the company's performance leaves something to be desired.

According to the stock charts, 2017 hasn't been a bad year for Nike, Inc. (NKE 0.48%). Shares of the sneaker giant are up 25% with a few days left, outpacing the S&P 500 thanks to a rally after its October Investor Day conference, but the rise in investor optimism belies problems that have plagued Nike all year long, including falling sales in North America, layoffs and a restructuring plan, getting outplayed by rival Adidas (ADDYY 0.15%), and even a rash of ripped jerseys spoiling its NBA debut.

Let's take a look back at the year that was for Nike and how the stock managed to overcome the series of challenges it faced. 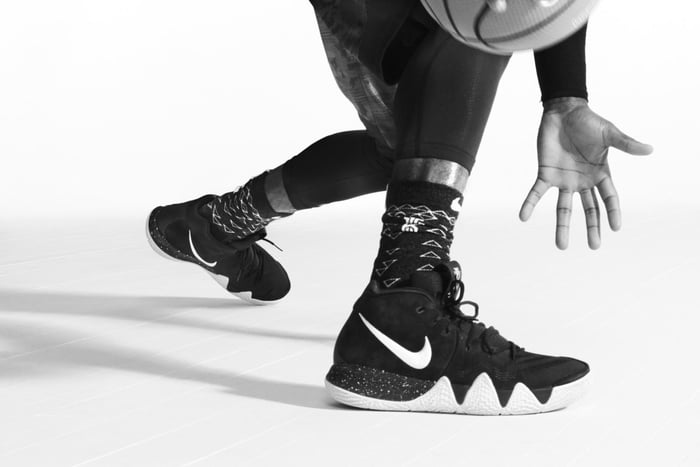 Problems on the homefront

Like its rival Under Armour (UA -3.58%) (UAA -4.22%), Nike has seen North American sales growth evaporate as a rash of bankruptcies have upset the sports retail industry and traditional partners like Foot Locker (FL -4.24%) have faced challenges from e-commerce competitors. Meanwhile, Adidas has been stealing market share away form Nike and Under Armour with innovations like Ultra Boost, NMD, and Cloudfoam, and the resurgence of vintage styles like Superstar and Stan Smith.

In Nike's most recent quarter, North American sales fell 5% with footwear sales off 7% as management noted a continuing promotional environment as well as the shift to digital, which has troubled its brick-and-mortar partners. The company did see those declines improving in the second half of the fiscal year as it launches new products at the end of its current quarter, the fiscal third quarter, and still sees long-term North American revenue growth in the mid-single digits. While international growth remains strong, Nike's earnings per share have fallen 16% over the last two quarters as slowing sales at home have pressured gross margins and profits.

In response to its sluggish performance in North America, Nike announced a new plan in June. Called the Consumer Direct Offense, the sportswear king said it would realign its retail strategy by "deeply serving customers" 12 cities in 10 countries across the globe, doubling its innovation, speed, and connections with consumers, and realigning its management structure. Additionally, the company said it would lay off about 2% of its total workforce, or about 1,400 employees. Around the same time, Nike also said it would begin selling its product on Amazon in a pilot program, reversing a long-standing policy against it, as it sought greater control of how its wares were displayed on the retail site and to push aside third-party vendors. Shares dove on the news as the plan seemed to be borne out of necessity as North American sales were turning negative due to competition from Adidas and struggles in its traditional selling channels.

The company later elaborated on the strategy at its Investor Day conference, outlining long-term financial goals and a retail strategy that would focus on 40 partners willing to elevate the Nike consumer experience. While that shift may seem promising, the most recent quarterly results with falling profits have not been inspiring.

Arguably, no other Nike brand is more iconic or beloved than the Air Jordan. The basketball shoe has become a staple of streetwear and urban culture, coveted by both sneakerheads and everyday consumers. However, Nike's ability to drive demand for its Jordan launches appears to have faded this year. Scarcity has always been a key component of the popularity of Air Jordans, which tend to fetch high prices on secondary markets, however oversupply, too frequent launches, and changing tastes may be weighing on the premium brand. Morgan Stanley issued a note in August, saying Jordan's performance was "much weaker than expected" and could create a "previously unthinkable brand problem" for Nike.

That month, Adidas also topped Jordan in domestic sales for the first time ever according to NPD Group. NPD Senior Analyst Matt Powell said Adidas' moving into the number two spot (behind Nike brand) was something he "never expected to see in my lifetime."  While Jordan brand is much smaller than Nike brand, it creates a halo for the entire company, and it's discouraging for investors to see the value of such an enduring brand sliding. Since then, Nike seems to have curtailed some of that oversupply, but it may be hard to recapture the same magic.

Going into next year, the problems that have plagued Nike this year appear to be mitigating as North American sales are expected to improve and the company is making efforts to avoid markdowns and reassert itself as a premium brand. However, high expectations are already baked into the stock as shares are trading at a P/E ratio of 28 based on this year's projected EPS of $2.30, down from $2.51 last year.

While Nike's consumer direct offense holds promise, it seems like the stock is due for a breather after the recent run-up. Continued share appreciation will be hard to justify if profits are declining.