Find out the one key metric to watch.

Vehicle sales may be plateauing in the U.S. market, but Ford Motor Co. (F -3.86%) and General Motors (GM -5.50%) both have a secret weapon to help them through whatever comes next: their financial arms. Ford Credit and General Motors Financial (GMF) have grown in importance for Detroit's two largest automakers, but investors often overlook them. Let's review the role these financial divisions play in their companies, consider what could go wrong for them, and dig into a recent study that will help us gauge where they might be headed.

Why are Ford Credit and GMF important?

Ford's fourth-quarter numbers clearly reveal just how central Ford Credit is to the company. While the North American region of the automotive segment generated $1.6 billion in adjusted pre-tax profits, Ford's second-most-profitable entity was its financial services segment, which generated just under $600 million, far more than the profits it made in South America, Europe, the Middle East and Africa, and Asia Pacific regions combined. General Motors' results aren't as lopsided because it's still building up its financial division, but GMF generated record full-year revenues of $12.2 billion and posted a 50% gain in EBIT-adjusted earnings to $1.2 billion in 2017.

It's easy to see why these financial arms benefit their companies when times are good, but investors have to remember that these divisions can flip to producing heavy losses when times are bad. Here's why.

When a car lease is issued, the automaker estimates what the residual value of the vehicle will be upon its return -- i.e., how much it will be able to get for it when it's auctioned off. That's a big factor in their decisions about how much they can charge for the leases. If the company estimates poorly, and vehicles don't generate the auction values they expect, profits take a hit. Below, we cans see the impact slightly higher residual values had in Q4. 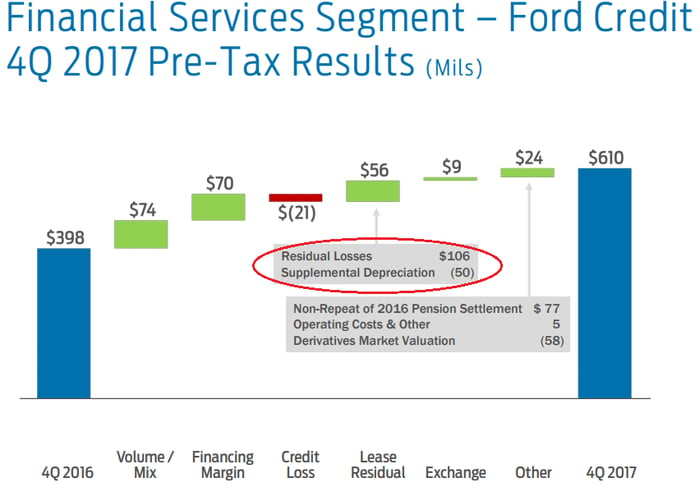 How investors should think about residual values

Seeing how a slight rise in residual values can impact results, it's easy to imagine a bad scenario such as the Great Recession, when demand for off-lease cars plummeted, sending auction prices down and causing hundreds of millions of dollars in annual losses. But how exactly can investors get any insights on where those metrics might go for specific automakers? Fortunately for us, J.D. Power's Vehicle Dependability Study (VDS) offers some clues. 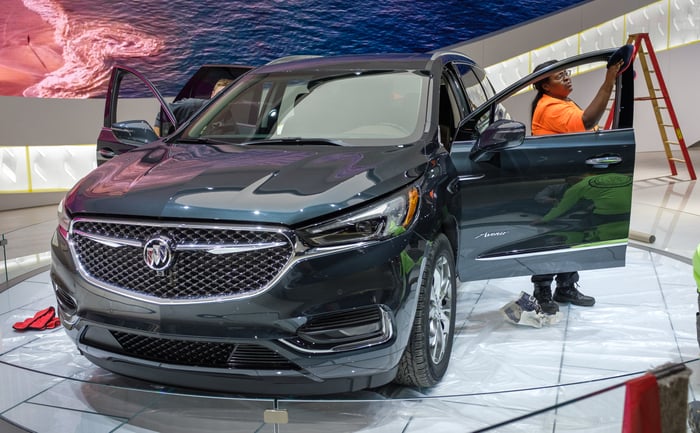 Better vehicle dependability scores not only improve demand for those used models, they're also a big contributor to higher residual values, according to J.D. Power, which has compiled its VDS for 29 years and counting. The survey ranks General Motors' Buick marque highest among mass-market brands, and third-highest overall -- beating out some luxury lines, which is an impressive feat. Chevrolet also scored far above average, and ranked sixth overall out of 31. Ford's namesake brand scored just slightly under the industry average, while its luxury Lincoln marque scored slightly above average.

Investors should certainly keep their eyes on these how these financial divisions are doing, as they offer automakers a great source of profit and growth at a time when new vehicle sales are plateauing. However, those profits can disappear quickly if residual values drop, so surveys such as J.D. Power's VDS study can be invaluable tools for investors as they look to predict which way those numbers are heading.