Yes, Amazon.com is a threat. But it's not that big a threat.

If you're a shareholder in UPS (UPS 2.61%), chances are you haven't been smiling a lot lately.

Over the past month, shares of UPS stock have tumbled an astonishing 20% in value, and are now flirting with their 52-week low. One reason for this is well known -- it begins with the letter "A" and ends with ".com." But according to analysts at Chicago-based Loop Capital, fears that Amazon.com (AMZN 3.58%) will destroy UPS' business are overblown. Down 20% in a month, UPS stock is a buy, says Loop. 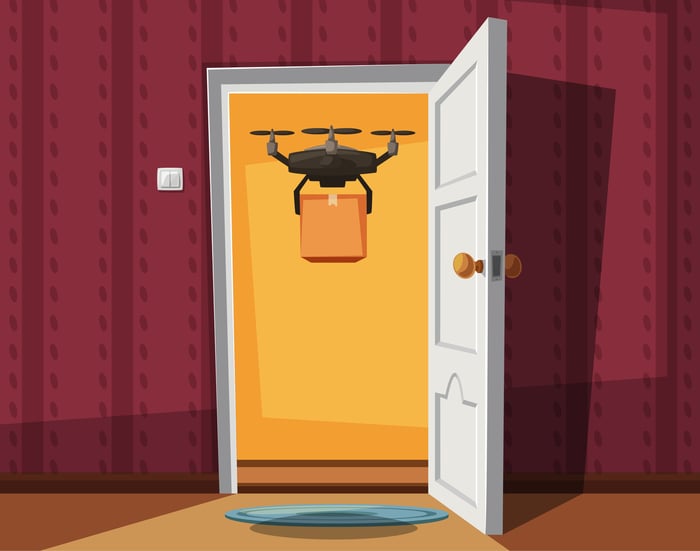 Amazon is knocking. Should UPS investors be afraid to open the door? Image source: Getty Images.

Amazon reportedly intends to launch a new business delivering packages, putting in direct competition with UPS and FedEx. Initially, SWA will service only businesses and customers located within the confines of L.A., but if all goes well, there's the potential for Amazon to roll out this service in other regions, or even all across the country.

This, says Loop Capital, is the No. 1 reason why UPS stock "has been in free-fall" these past three weeks. In SWA, Amazon is "effectively crossing the red line from private fleet to for-hire competing carrier," says the analyst in a report covered on StreetInsider.com (requires subscription) this morning.

Forget the elephant -- mind the mouse, nibbling away at free cash flow

Astute investors will note, however, that the Journal reported on SWA Feb. 9, but UPS stock had its first and steepest fall-off in share price on Feb. 1. Loop noticed this, too, and ascribes UPS' first sell-off to a another cause.

In its Q4 earnings conference call with analysts held on the morning of Feb. 1, UPS CFO Richard Peretz informed investors that his company had just spent $5.2 billion on capital expenditures in 2017 -- roughly twice the level of capital spending UPS had been averaging over the previous five years, according to data from S&P Global Market Intelligence. Moreover, UPS plans to spend even more on capex in 2018 -- "between $6.5 billion and $7 billion," said the CFO.

This level of spending could even become the new normal. Challenged by analysts who pointed out that "we haven't seen anything sort of approaching this" level of capital spending in years past, Peretz warned investors that UPS will probably continue spending heavily on capital investment (specifically, buying airplanes from Boeing) for "the next few years."

So you see, there are really two things worrying UPS investors today. On the one hand, you have Amazon.com, currently a UPS customer, apparently moving to bring more business in-house, and perhaps attempting to horn in on UPS' own non-Amazonian delivery business. On the other hand, you've got UPS itself doubling or even tripling its level of capital investment, and cutting deeply into free cash flow in the process.

How should investors be thinking about these developments?

In Loop's view, worries over Amazon displacing UPS in package delivery are "a little overblown." Yes, Amazon.com is a big force in online retail , accounting for 44% of all online sales in the U.S. last year. However, Amazon's share of total retail sales in the U.S. is only 4% -- and only 0.5% globally. Even if Amazon is successful in L.A., it's going to be some time before Amazon SWA conquers the world and becomes a threat to UPS globally.

That's why Loop Capital thinks UPS' sell-off presents an opportunity to buy the stock, which Loop believes is still worth the $131 a share or so it was selling for back at the end of January.

On the other hand, Loop does worry about UPS' trend toward heavier capital spending. To hear management tell it, UPS is partly motivated by changes in U.S. tax law to spend more heavily on capital investment, and still expects to reap 23% to 28% returns on invested capital over time. Still, heavier capital spending caused UPS to burn cash for the first time in a decade last year. Heavier capital investment in 2018 and "the next few years" after that could make achieving positive free cash flow a hit-or-miss proposition for UPS for years to come.

That's the more worrisome development in Loop Capital's opinion -- and my own.