Please ensure Javascript is enabled for purposes of website accessibility
Log In Help Join The Motley Fool
Free Article Join Over 1 Million Premium Members And Get More In-Depth Stock Guidance and Research
By Anders Bylund - Feb 27, 2018 at 11:07AM

The focused investment firm's core holdings didn't move far during the fourth quarter, but there were big tax changes and share buybacks afoot.

The company formerly known as Yahoo! just published its first annual report under the new Altaba (AABA) moniker. As a reminder, all of Yahoo!'s actual operations now belong under the Verizon (VZ -0.37%) umbrella, leaving Altaba to manage a portfolio of investments and intellectual property rights that Verizon didn't want to include in its $4.5 billion buyout offer.

Chiefly, Altaba owns 14.7% of China-based e-commerce giant Alibaba (BABA -2.02%) and a 35% stake in former subsidiary Yahoo Japan, an online search and marketing service in the Land of the Rising Sun. How have these core investments treated Altaba since the third-quarter update? 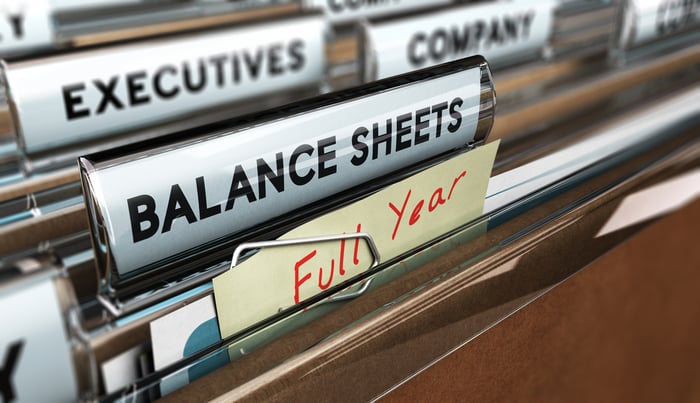 Seventy-eight percent of Altaba's total investment portfolio consists of Alibaba shares. Alibaba's stock has gained 88% since Altaba was formed, and Altaba shares followed along with a 71% gain. Over the same period, Yahoo Japan offered a 9% return and the S&P 500 market barometer gained 17%.

Alibaba shares actually fell a bit during the fourth calendar quarter of 2017, but came roaring back with a fantastic earnings report in January. Altaba followed suit, of course, since its Alibaba holdings now are worth $74.5 billion.

Beyond the two flagship holdings, Altaba holds $2.8 billion of corporate bonds, $1 billion in certificates of deposit, and another $1.4 billion in an assortment of smaller investments. The Excalibur IP operation, which holds the licensing rights to Yahoo!'s portfolio of technology patents, did not move over to Verizon and accounts for $665 million of Altaba's asset value today.

The company has been reshaping this part of its portfolio. The bond balance is down from $5.5 billion at the end of September, Altaba cashed in $600 million of its certificates of deposit over the last three months, and other investments have grown from $1.2 billion. So far, the company has neither bought nor sold a single share of Alibaba or Yahoo Japan in the Altaba era.

The funds Altaba raised from liquidating some bonds and cash equivalents were used to retire some of the company's own shares. Altaba exhausted its $5 billion buyback policy during the fourth quarter, having retired 48.4 million shares in that period alone and 73.9 million shares since the program was announced in July 2017. As a result, Altaba's share count was reduced by 8% in the second half of 2017. The company has not announced a new buyback program to replace the completed one.

Altaba shares are trading roughly 26% below the combined value of its investment assets, a narrower spread than the 30% discount seen in recent reports. As fellow Fool Frank DiPietro explains, that's due to the tax costs involved in moving those international funds back to American soil. Last year's tax reform package included some big changes to the taxation treatment of foreign profits, which includes nearly everything in Altaba's portfolio. The company recorded a $6.4 billion noncash benefit from these tax changes, which explains the narrowing of the foreign taxation discount.

What You Need to Know About Altaba's Fourth Quarter

Is Altaba a Buy?

Why Altaba Shares Fell 12% in December