General Motors (GM 1.35%) said that it will unveil its all-new 2019 GMC Sierra pickup truck in Detroit on Thursday -- and just it released a pair of teaser photos via social media.

GM's Chevy Silverado sells in greater numbers, but the Sierra -- the Silverado's upscale sibling -- brings home a lot of profit, particularly in the popular Denali trims. That makes it a big deal for GM's bottom line. Here's what we know. 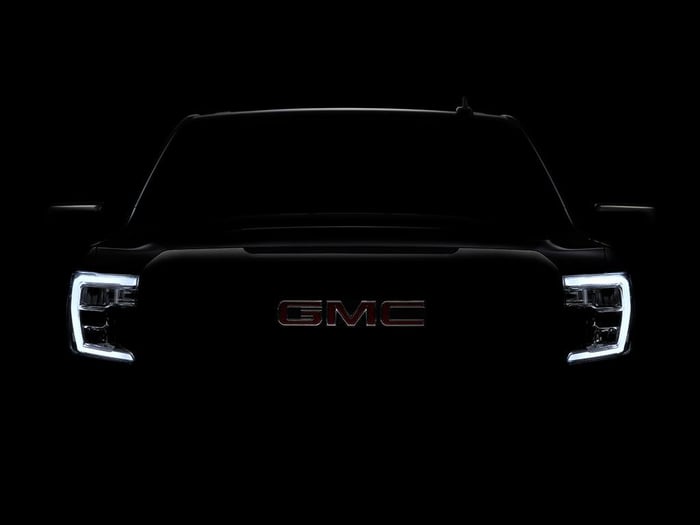 As you can see, the teaser photos don't tell us a whole lot. The truck in the photos looks like, well, a GMC Sierra -- just revised and updated.

But like its Chevy sibling, the 2019 Sierra is all-new from the ground up, and GM has engineered it to deliver more profits than its predecessor. The new trucks were designed with more upscale options and features in mind, to improve profit margins. Beyond that, GM is in the process of reshuffling several of its North American assembly lines in order to produce a greater percentage of higher-profit crew-cab models once the all-new trucks are launched.

But this all-new Sierra is more than just a Silverado with a different grille. In a presentation in January, GM president Dan Ammann gave some hints about the thinking behind GMC's new pickup.

You will see in the next couple of months, when we reveal the GMC trucks, a significantly greater level of differentiation versus anything that has come before. That's the first thing. The second thing is you will see inside of the GMC lineup, taking that even step further with the Denali sub-brand inside of GMC. Denali has been sort of a sleeper hit. It's been a huge home run for very premium product in the truck segment -- frankly, across the whole GMC portfolio. 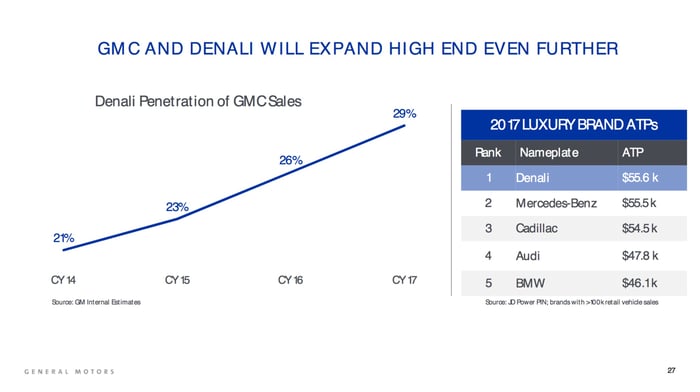 Both the Silverado and the Sierra were designed to take a greater share of the premium-pickup market, Ammann said. The high end of the full-size pickup market is dominated by GM archrival Ford Motor Company, which has pushed its F-Series upmarket in recent years with new, plush versions. While the Silverado and Sierra together have about 35% of the U.S. market for light duty pickups, GM sells just 27% of the pickups sold with an average transaction price of $55,000 or more, Ammann said.

Boosting that number is a key part of the new Sierra's mission, and it'll be led by the upscale Sierra Denali versions. Sales of GMC's Denali sub-brand have risen significantly in the last few years, Ammann said, and now make up 29% of the GMC brand's total sales. "And that thing is a money machine," delivering huge profit margins, he said. "If Denali was its own luxury brand, it would have higher [average transaction prices] than any other luxury brand in the market."

"This is a very strong play." 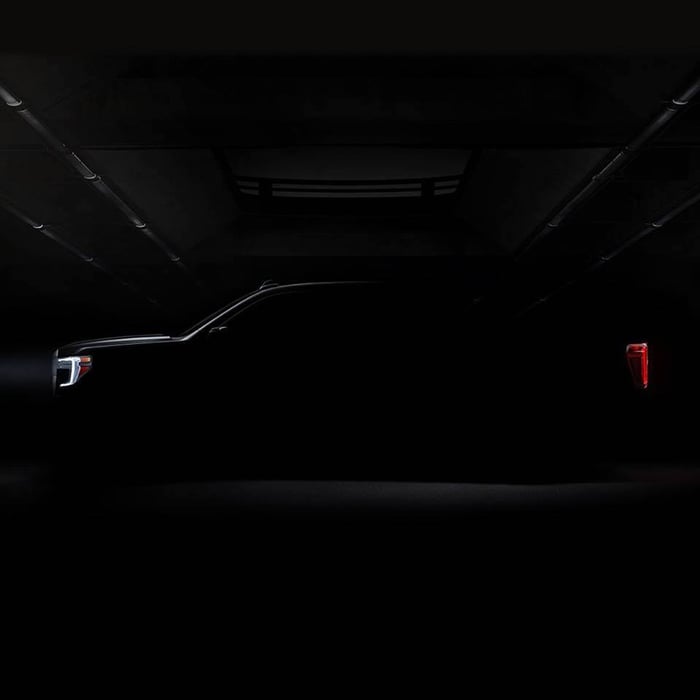 The second of two teaser photos of the 2019 GMC Sierra released by GM on Monday. Image source: General Motors.

Like the all-new 2019 Silverado, the new Sierra will be built on an architecture that uses GM's "mixed materials" construction approach to reduce weight (by about 450 pounds in the new Silverado). All other things behind equal, the weight reduction should improve performance, handling, towing capacity, and fuel economy versus the current truck.

The new Sierra will probably also share the Silverado's longer wheelbase and more spacious interior, when compared to current models, as well as some or all of its engines. The new Silverado will be offered with two different V8s (5.3 and 6.2 liters), as well as a 3.0 liter six-cylinder diesel engine, and with a new 10-speed automatic transmission in some versions.

Production of the new Sierra will probably start in the fourth quarter of 2018, at GM's pickup factory in Fort Wayne, Indiana.

The upshot: GM expects the 2019 Sierra to deliver a lot of profit

Like the new Silverado, GM engineered the Sierra to bring home fatter profits than the current model. But as Ammann explained, the thinking behind the GMC truck was a little different. The growing popularity of GMC's highly profitable Denali sub-brand gave GM an opportunity to take the all-new Sierra Denali further upscale, differentiating it more from the "regular" Sierra.

Long story short: Expect the new Sierra, particularly in Denali trim, to be plush, sophisticated, and expensive. We'll find out on Thursday.