Please ensure Javascript is enabled for purposes of website accessibility
Log In Help Join The Motley Fool
Free Article Join Over 1 Million Premium Members And Get More In-Depth Stock Guidance and Research
By Matthew DiLallo - Feb 27, 2018 at 10:00AM

Pipeline giant ONEOK (OKE -1.30%) capped a transformational year by delivering earnings that were just above the midpoint of its guidance range in the fourth quarter. The company benefited not only from the acquisition of its former MLP but also from continued improvement in energy market conditions, which fueled increasing volume across its systems. That growth appears poised to continue for quite some time given the volume of expansion projects the company has lined up over the past few months. Data source: ONEOK. Chart by author. In millions of dollars. 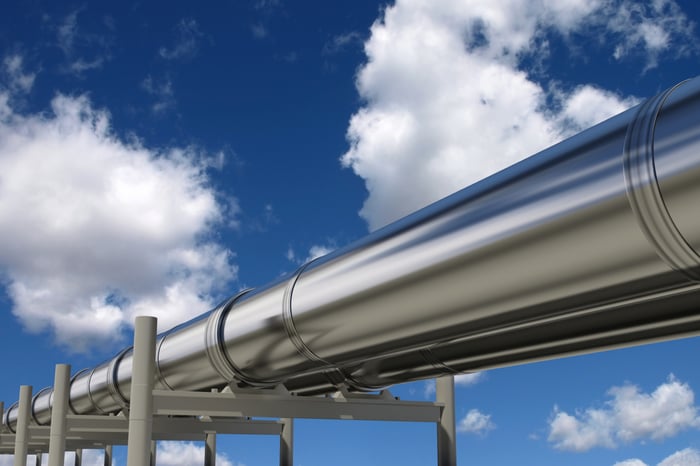 A more stable energy market, along with increased drilling efficiencies, enabled producers to earn higher returns on new wells. That incentivized them to complete more locations last year, which fueled higher volumes across much of ONEOK's operating areas, especially in its key STACK and Bakken regions.

ONEOK believes it can continue growing at a fast pace over the next few years, fueled in part by upcoming growth projects. Since last June, the company has lined up $4.2 billion of high-return expansions, including announcing another $2.3 billion last week. These projects should enter service through early 2020, providing the company with the fuel for increasing its dividend at a 9% to 11% annual rate through 2021.