It's another quiet day for leading cryptocurrencies bitcoin (BTC-USD) and Ethereum (ETH-USD), which have both changed by less than 2% after another relatively quiet day on Tuesday. While this may not be exciting for speculators, a lack of volatility could actually be a positive catalyst for cryptocurrencies over the long run.

Data source: www.investing.com. Prices and daily changes as of February 28, 2018, at 11:45 a.m. EST, and prices are rounded to the nearest cent where appropriate.

As you can see, cryptocurrencies are down across the board today, but the key takeaway is that there aren't any big moves. 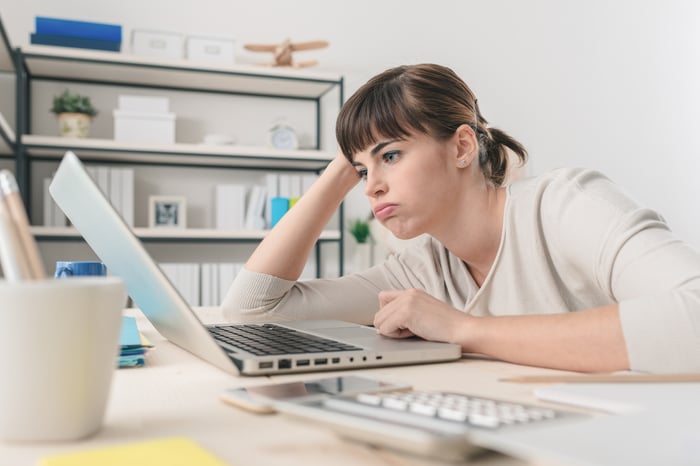 Bitcoin's volatility is its biggest obstacle to mainstream adoption

I've written before that there are several big obstacles standing in the way of bitcoin (BTC-USD) becoming a mainstream currency. And to be fair, some of the problems are starting to improve.

For example, bitcoin transaction fees peaked at a prohibitively expensive level above $25 in December, but those fees have since come down to where they're more competitive with other payment-processing expenses. The problem of scalability and long transaction times also has several viable solutions on the table, such as the wider roll-out of the Segregated Witness, or SegWit protocol.

These are definitely steps in the right direction, but before bitcoin could ever achieve widespread use as a currency to pay for products and services, or as a "store of value" like gold, the volatility will need to calm down a little.

Here's the problem from both sides

From the consumer's perspective, let's say I'm going to backpack around Asia later in summer 2018. Instead of exchanging my currency everywhere I go, or dealing with spotty credit card acceptance in some parts of the region, I decide to store my $5,000 travel budget in bitcoin (BTC-USD). Well, by the time my trip rolls around, my bitcoin could be the equivalent of $20,000, or $1,000. Both scenarios are certainly possible, and if the latter is the case, my trip may not happen at all.

From the merchant's perspective, the lengthy transaction times combined with the volatility create a level of uncertainty many just don't want to deal with. The average bitcoin transaction takes just under an hour to confirm, according to blockchain.info, but there have been times of high activity where delays have risen to as much as a day or more. By the time the merchant can actually use the customer's bitcoin payment, its value could have changed dramatically.

What is "acceptable" volatility?

So, what is a "typical" currency fluctuation that everyday people might find palatable? Well, just for context, as I'm writing this, the euro, yen, and pound have moved by 0.2%, 0.7%, and 0.9%, respectively, relative to the U.S. dollar, over the past day. Daily moves in the 1% to 2% range aren't unusual, but bitcoin-like moves of 10% or more in a single day are largely unheard of.

The bottom line is that bitcoin can rise and fall in price over time if it is to become more widely used, but wild swings are standing in the way of its mainstream acceptance. The same can be said for other cryptocurrencies. If we start to get more calm days like Tuesday and Wednesday have been, it could go a long way toward mainstream adoption. On the other hand, days where bitcoin rises or falls by 10% or even more (and we've had a few of them recently) can scare away would-be adopters of the digital currency.