Please ensure Javascript is enabled for purposes of website accessibility
Log In Help Join The Motley Fool
Free Article Join Over 1 Million Premium Members And Get More In-Depth Stock Guidance and Research
By Joe Tenebruso - Feb 28, 2018 at 9:19AM

The investment advisory firm continues to buck the trend toward passive funds.

Although investors pulled billions of dollars out of actively managed mutual funds in 2017, Diamond Hill Investment Group (DHIL 1.28%) grew its assets under management by more than 15% last year. That helped the investment manager increase its profits at a solid clip, even as many of its rivals lost sizable portions of their business.

What happened with Diamond Hill Investment Group this quarter?

Diamond Hill's fourth-quarter revenue fell 6% to $37.8 million, but that was largely due to $6.4 million received in connection with the termination of a variable rate fee contract in the fourth quarter of 2016. Excluding this one-time gain, revenue rose 12%. For the full year, Diamond Hill's revenue increased 7%, to $145.2 million.

The company saw net cash inflows of $425 million in 2017, with $843 million of inflows to its proprietary funds more than offsetting $164 million of outflows from its sub-advised funds and $254 million from its institutional accounts. These net cash inflows, together with market appreciation of $2.5 billion, helped the investment firm's assets under management (AUM) grow to $22.3 billion as of Dec. 31, up from $19.4 billion at the end of 2016. 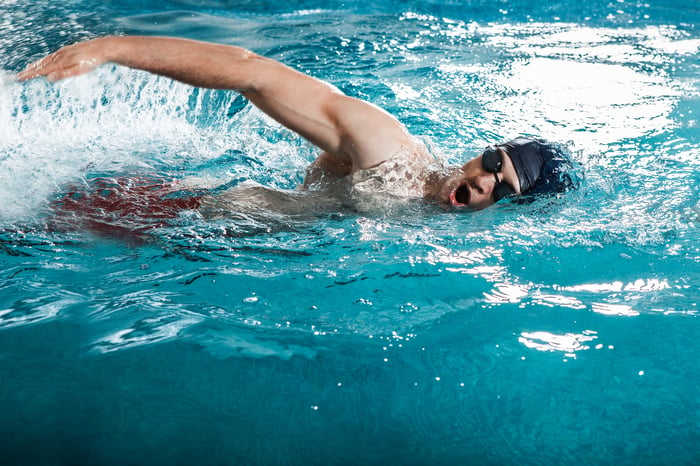 Diamond Hill may be swimming against the tide, but its AUM totals are still moving in the right direction. Image source: Getty Images.

In 2017, investors pulled $207.5 billion out of U.S. equity active funds, according to research company Morningstar, while $220.4 billion flowed into passive funds. Yet against this massive headwind, Diamond Hill continues to grow its AUM. That's a testament to the strong performance of its funds, and it suggests that Diamond Hill can further grow its business even if the actively managed fund industry continues to shrink in the years ahead.