Square (NYSE:SQ) released some interesting details about Cash App -- its peer-to-peer payments app -- with its fourth-quarter earnings results. The headline is that it now has 7 million monthly active users. For reference, PayPal's (NASDAQ:PYPL) Venmo -- Cash App's chief competitor -- had about 10 million users last August, according to an estimate from Verto Analytics.

Beyond that, CFO Sarah Friar told analysts that one-third of transactions on the app are already monetized. That's primarily led by purchases on the Cash Card -- a debit card Square released last year that's linked to user's Cash App account. Square is able to collect interchange fees on transactions using the Cash Card. Cash App is also monetized through instant deposit for customers who can't wait a few days for their payments to hit their bank account.

Cash App started the year around 123rd in the App Store. It ended the year around No. 35, and it was the No. 1 finance app in the fourth quarter. Here's how Square's Cash App went from a distant second to running neck-and-neck with Venmo. 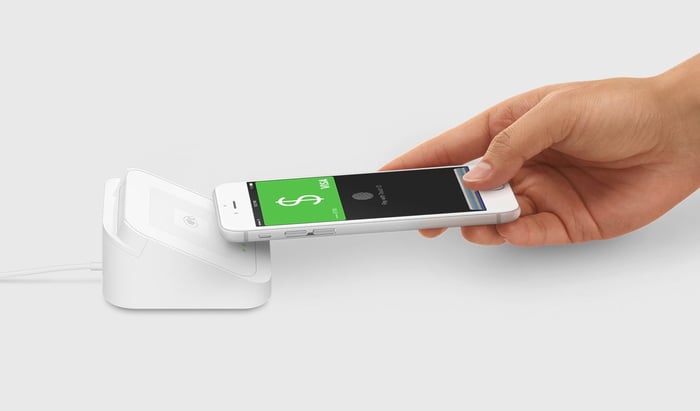 Square introduced a virtual debit card at the end of 2016, which allowed users to spend their Cash App balance online or through a mobile wallet. So, if you were ordering a pizza online, for example, your friends could send you money on Cash App, then you could pay for the pie with the debit card number.

Square followed it up in April with a physical debit card and allowed users to add a personalized signature or drawing to the front of the card. The card has proved extremely popular, with users spending over $90 million using their Cash Cards during the month of December. That's a run rate of over $1 billion.

Square collects a small percentage of each payment on its Cash Card, but it passes most of it onto the payments network it uses. The few pennies Square sees per transaction were a big reason Friar was able to claim one-third of transactions in the app are monetized.

The Cash Card has been extremely effective in expanding Cash App beyond consumer-to-consumer payment to consumer-to-business payments. That's an area Venmo has been trying to break into for a long time now with its Pay with Venmo feature. PayPal says there are now 2 million U.S. merchants that use Pay with Venmo, and its monetization feature adoption is ahead of its peer-to-peer adoption at this point in its life. Pay with Venmo likely has much lower transaction volume than Cash Card, but the take rate is significantly higher for PayPal as it keeps the full transaction fee.

Square introduced the ability to buy bitcoin in the Cash App back in November, opening it up to everyone in January. Bitcoin grew in popularity during the last few months of 2017 as the price of the cryptocurrency soared to record highs.

The addition of bitcoin buying and selling in Cash App helped propel it further up the App Store charts in late 2017. More importantly, it gave users another reason to interact with Cash App and keep it at the top of their minds.

Right now, Cash Apps bitcoin capabilities are fairly limited. There's no way to send bitcoin to friends or use it as payment with Cash Card; you can only buy and sell within a personal account. On the earnings call, CEO Jack Dorsey assured investors that it's not stopping at just buying and selling bitcoin. Expanding to transactions made in bitcoin may make Cash App even more popular.

The real value of Cash App is still untapped

Square's ability to grow the user base and engagement on Cash App with the introduction of the Cash Card and bitcoin buying and selling is just the start. Square can collect data on consumer spending behaviors and bring its merchant operations closer to its consumer operations.

One example would be Square Capital, which offers loans to merchants using their transaction history to determine their credit-worthiness. Friar talked about the potential to extend Square Capital to consumer loans at an investor conference in mid-February.

Not only does Square see transactions from the Cash Card, but it also encourages users to receive direct deposits from their paycheck into the app, primarily serving the underbanked market. These customers are prime candidates for consumer loans from Square. With in-depth data about both spending and income thanks to the Cash App, Square is able to serve them where traditional banks cannot.

Square could also develop partnerships with its merchants to target advertisements at consumers on the Cash App. There are likely several other ways to leverage the data of 7 million users spending a billion dollars per year in stores and sending even more to their friends.

Monetizing transactions is just the start. Monetizing data will be much more important in the long run.