Please ensure Javascript is enabled for purposes of website accessibility
Log In Help Join The Motley Fool
Free Article Join Over 1 Million Premium Members And Get More In-Depth Stock Guidance and Research
By Jason Hall - Feb 28, 2018 at 9:27AM

The hydraulic and electronic components manufacturer reported big revenue gains and progress with integrating a recent acquisition, but higher expenses continue to weigh on the bottom line.

Sun Hydraulics Corporation (HLIO 5.19%) reported its fourth quarter and full-year 2017 results on Feb. 27, finishing the year with big sales growth. Revenue from Q4 sales was $84.2 million, up 69% from last year, while full-year sales were up 74% to $343 million, driven higher both by the 2016 acquisition of Enovation Controls and 21% growth in organic sales.

The company's expenses also edged higher, in part due to non-recurring items related to acquisitions, changes in tax law, and other things management said won't recur next year. This played a big role in net income declining to $2.8 million -- or $0.10 per share -- on a GAAP basis, though management said it was up 50% adjusting for non-recurring items. The company also reported expectations for sales growth of 8%-12% in 2018, a solid level of growth, though maybe less than investors were hoping for based on the market's reaction, considering shares closed down almost 7% following earnings. 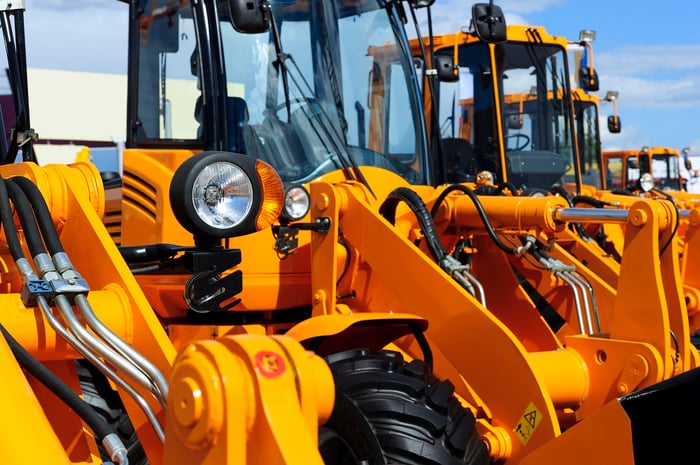 As you can see in both the fourth-quarter and full-year results, Sun Hydraulics' revenue grew at a much higher rate than earnings. This is not uncommon when companies make acquisitions, as it can take time to fully integrate two businesses together, eliminate unnecessary expense, and find ways to leverage the scale of the combined entity. Sun said that it's still working on doing that with Enovation Controls.

For the full year, the company reported $15.6 million in expenses that it excluded from its GAAP results to arrive at the adjusted earnings per share results listed above. These adjustments include $10.2 million in acquisition-related depreciation and amortization, $2.5 million in acquisition, finance, and restructuring charges and expenses, and $2.9 million in one-time operational items. The company also spent $3 million more on net interest expense in 2017 related to debt needed to fund the Enovation Controls acquisition. For the time being, these higher incremental expenses are weighing on the company's operating margins and profitability.

Management did say that they have completed the initial integration of Enovation Controls, and that "synergies" were progressing ahead of plan. So there's that.

Getting ready for another big acquisition

On Feb. 19, Sun Hydraulics announced it was acquiring privately held Faster Group for $531 million in cash, and expected the transaction to close sometime in the second quarter. It seems to be an ideal addition to the company, as it makes quick-release hydraulic coupling systems, primarily used in agricultural, construction equipment, and general industrial applications. Faster Group generated $130 million in sales in 2017 and an EBITDA margin of 27.5%. Based on those numbers, Sun is paying about 15.6 times last year's EBITDA for the company, which expects sales to grow around 16.5% in 2018, with a similar margin profile.

Sun is paying for Faster Group with $161 million in cash and $370 million in debt, using a recent $253 million secondary offering to raise the extra cash it will need, and to pay off the $116 million in debt outstanding in preparation for closing the Faster deal in the coming months. On the earnings call, CFO Tricia Fulton said, "Given the strong cash flow of our combined organization, we believe this is a very manageable level and we'll aggressively begin repaying it during 2018."

Sun's management continues to aggressively pursue its "Vision 2025" goal of reaching $1 billion in sales by 2025. With guidance for $370 million to $385 million from the existing business this year and Faster Group expected to generate $150 million in sales during the same time (though the deal won't close until the second quarter), that puts the company about halfway there.

Management will need to continue to drive out excess costs and get the most out of each acquisition to make them work profitably. The reality is, growth via acquisition can be incredibly difficult to do well, and can destroy a lot of value if done poorly.

The good news? Sun will need to grow sales at "just" a 10% annualized rate starting in 2019 to reach $1 billion in sales by 2025. In other words, it may not need to make any more business-changing acquisitions to get to its sales goal. This is especially good news for investors who are focused on the rest of "Vision 2025": Superior profitability and financial strength.