You don't want to be taking big risks with your nest egg, so stick to solid, high-quality stocks and hold them for a long time. You may miss out on some of the biggest winners, but you'll avoid getting burned.

If you're looking to add a high-quality stock to your portfolio, we have some ideas. Here's why three of our Foolish investors think Walmart (NYSE:WMT), Berkshire Hathaway (NYSE:BRK.B), and Nucor (NYSE:NUE) are the best bets for growing your nest egg. 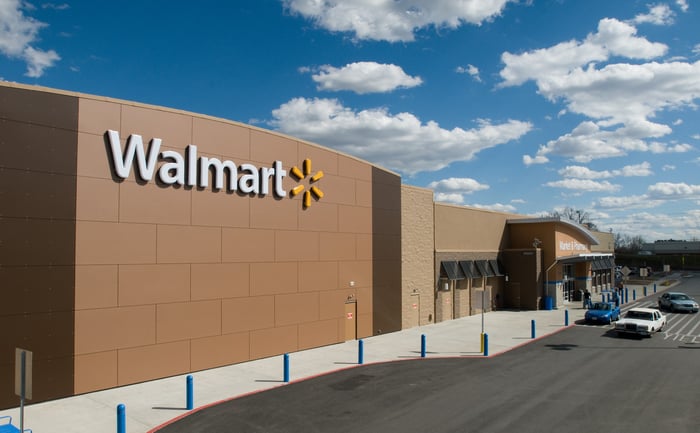 A dominant retail force for today and tomorrow

Rich Duprey (Walmart): It might not look the same in 50 years as it does today, but Walmart likely is going to be around in some fashion and be as much an integral part of the retail scene as it is today. That's the sort of rock upon which to build and feed a retirement nest egg.

While Walmart is indisputably the king of bricks-and-mortar retail today, it's increasingly an important cog in the e-commerce wheel, as well -- and growing bigger. Amazon.com naturally dominates the digital landscape, but don't let Walmart's physical landscape fool you: It's a heavyweight in its own right in the online space.

Through its acquisition of Jet.com, its partnership with China's JD.com, and its own initiatives, Walmart's online presence is becoming more pervasive. E-commerce growth last quarter saw net sales surge 50% from the year-ago period, while merchandise volumes sold online jumped 54% year over year. And because of its vast, far-flung footprint of some 4,000 stores, Walmart has an effective distribution center that can reach nearly every person in the U.S.

The future of retail is not all online, and though it may be a smaller one from a bricks-and-mortar standpoint, it will be those companies that best meld the online and offline worlds that survive, as well as thrive. Walmart is proving that it can navigate the turbulent waters, enjoying higher comparable sales and net sales even as its digital presence expands.

Investors who bet on Walmart believe it will keep evolving to meet the challenges. Meanwhile, they will reap the benefits of the company's $2.04 per-share dividend, which yields a modest 2%. A retiree's portfolio could certainly have a bedrock foundation built on Walmart stock.

This company will be around for a long time

Tim Green (Berkshire Hathaway): Warren Buffett's track record at Berkshire Hathaway speaks for itself. Berkshire's per-share book value has compounded at a 19.1% annualized rate since 1965 and the per-share market value has compounded at a 20.9% rate over that same period. The S&P 500, including dividends, has managed a 9.9% annualized return, good for 15,508% in total. Berkshire's per-share market value is up more than 2,400,000%.

It's unlikely that this feat will be repeated in the future for two reasons. First, Berkshire is big. The company is now worth more than $500 billion, so growing book value at a double-digit pace becomes a more herculean task with each passing year. Second, Buffett is 87 years old, and his unnamed successors may not be able to fully fill his shoes.

This doesn't mean that Berkshire won't be a solid investment. The company is built to stand the test of time. It's comprised of businesses with durable competitive advantages and conservatively run insurance operations that make a blow-up next to impossible. If you're looking to grow your nest egg, Berkshire belongs in your portfolio.

Buying the best in a hard-to-replace industry

Tyler Crowe (Nucor Corporation): When it comes to investing over the long term, investors should look for companies that manufacture items that will be nearly impossible to replace -- such as steel. It's a must-have product in the construction industry thanks to its strength and versatility. As long as the population increases and we continue to build out infrastructure, steel will be an in-demand product.

Using that as a jumping-off point, a company that stands out in this industry is Nucor. There are lots of elements that make Nucor more attractive than most of its North American competitors, but they all boil down to a management team that's excellent at efficient operations and capital allocation.

For the past decade, steel has been a tough business in the U.S. as imported steel -- some of which has been illegally dumped on the market -- has significantly lowered steel prices. Instead of battening down the hatches and riding out the tough times, Nucor's management has used the opportunity to acquire smaller companies that diversify Nucor's steel products. They've also invested heavily in a new production facility. These moves have further entrenched the company as the largest steel producer in the country and have consistently generated the best rates of return in the business. 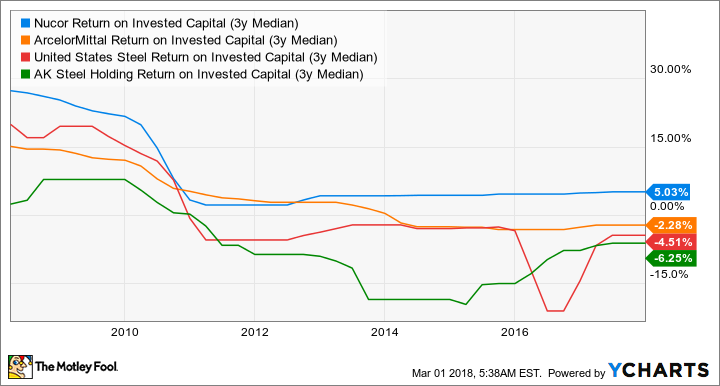 The recent change to the tax code gave earnings a one-time boost that makes Nucor's stock look like it's trading at a reasonable valuation. Backing out this change, the stock is more expensive than the headline numbers suggest. However, if you're looking for a stock to grow your nest egg, Nucor is worth a look.