David and Tom Gardner, The Motley Fool's co-founders, have been picking stocks for over two decades. Some of those companies have been acquired, others have grown so large that they no longer have much growth left, and still others have struggled or gone out of business. (Nobody in investing has a perfect batting average.)

When I looked over some of David and Tom's best-performing stocks, five in particular leapt out at me. These are stocks which have been big winners for a long time -- but I think they have plenty of opportunity left for market-beating growth:

What's special about these stocks?

What has led to these outsized gains? Each company has either been a major catalyst for, or one of the primary beneficiaries of, a major social trend.

Netflix's rise ushered in the widespread destruction of traditional video stores, and its DVD-by-mail rental service was a harbinger of the trend toward receiving goods at home instead of going out to stores to shop for them. Its rise has also enabled millions of Americans to "cut the cord" and remove their expensive cable packages in favor of a much cheaper Netflix subscription. Of course, Netflix has also benefited from the increasingly impressive quality of consumer TVs, which has enabled people to stay home from movie theaters without destroying their viewing experience.

It may surprise you to learn that Apple did not invent the smartphone. That honor goes to IBM, which launched its Simon Personal Communicator in 1992 -- 15 years before the iPhone's 2007 debut. It comes as such a surprise because the iPhone popularized smartphones, and they've transformed how we interact with information. According to 2016 data from the Pew Research Center, almost as many Americans (77% vs 78%) own a smartphone as they own a computer. (Given the trends, smartphone ownership has almost certainly surpassed computer ownership in the U.S. by now.) Apple isn't the dominant smartphone maker worldwide, or even in the U.S. -- that honor goes to Samsung -- and it doesn't have the dominant operating system -- that's Android. But it does have tremendous pricing power with customers in its sizable niche markets (including yours truly).

Amazon is many things to many people, highlighting Jeff Bezos' impressive vision for a company that started strictly as an online bookstore. Of course, to many it is a cheaper bookstore -- and its rise helped lead to the demise of a number of book retailers. And its Kindle series, first launched in 2007, has become the dominant brand in the e-reader market (which Amazon also helped launch and certainly popularized). But Bezos has also launched a full-scale assault on brick-and-mortar stores across a variety of different sectors in consumer goods and tech -- with huge implications for Amazon's top and bottom lines. Amazon Prime, with its free two-day shipping, has been crucial to that success -- and the video and music capabilities rolled into a Prime membership also provide Amazon with beachheads as it competes with both Apple and Netflix.

You probably know Alphabet better by its old name (and the name of its primary moneymaker), Google. Google is the dominant search engine worldwide, with roughly 92% global market share, according to StatCounter. Since there's a pretty good chance you found this article via Google, I won't waste time telling you how important and transformative search engines in general -- and Google in particular -- have been. YouTube, the dominant online video platform, is another Alphabet property, and its rise has coincided with a lot of people spending a lot more time online (whether they're watching how-to videos or cat videos -- we're not judging).

Like Alphabet and the other stocks I've mentioned above, Facebook likely needs no introduction. Social-media apps -- particularly Facebook's mature namesake property, but also its developing Instagram and WhatsApp brands -- have had an enormous impact on society, influencing how we interact (or not) with each other, consume news, play games, and even shop online. Indeed, Facebook plays on many of the same trends that have helped the other companies grow to such market dominance.

I hear this from a lot of people, and it's a fair criticism: These are all megacap companies. How much more could they possibly grow? 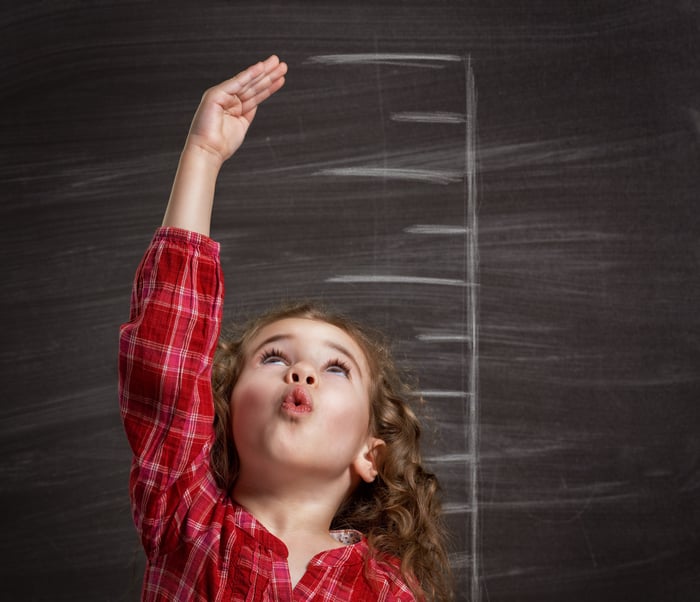 I'll answer that concern in two ways. The first is to look at revenue and earnings-per-share growth year over year for calendar year 2017:

Quick note on Alphabet: With the passage of tax reform, its earnings were substantially negatively affected due to the writedown of certain assets. If you net that out, EPS grew by 15% year over year.

More broadly, these are not the sort of numbers you see from companies that have fully matured. Now, that's not to say that they aren't maturing, because most are. Three of the five are generating earnings leverage -- that is, earnings are growing faster than revenue, a sign that they're beginning to see profitability benefits from their scale, and aren't reinvesting as much in the business. Amazon and Alphabet, by contrast, perennially reinvest every penny they can in new growth opportunities and business verticals, because they both remain very much in expansion mode. Everyone's growing revenue at or near double-digit rates. These companies all show signs of having plenty of growth left (which hopefully translates to plenty of gains in share price too).

Second, let's look at each company's growth opportunities from here.

Facebook is heavily monetizing its namesake platform for ad revenue, and it's begun the same process with Instagram, though it has a ways to go before Instagram's platform is fully saturated. Facebook Marketplace -- a way for people to sell their products directly on Facebook -- now boasts 700 million unique users, with growth continuing to ramp up.

Alphabet's core Google and YouTube properties still have plenty of growth left in them; as an AdWords client, I can confirm that there's lots more opportunity, as the Google team continues building out their data analytics to get marketers a great return on investment. Alphabet's various moonshot initiatives aren't individually likely to pan out, but taken as a whole, they offer so many compelling opportunities that just a few successes could do a great deal to drive the company forward.

Apple's infamous update cycle, whereby it convinces an astonishing number of people to buy the newest iPhone each year, remains alive and well; Canalys reported that the iPhone X was the world's top-selling smartphone last quarter. The Apple Watch and iPad are both showing accelerating growth as they seize market share. Each of these, on its own, represents a credible path to continuing growth for Apple. Tack on the launch of Apple's HomePod (its wireless smart-home speaker), and there are plenty of reasons for the growth party to continue for a long time hence.

Amazon and Netflix both enjoy strong network effects based on cheap subscriptions, and steady increases in perceived value by users. Amazon achieves this simply by tacking on new services for Prime members -- whether it's free e-books or an ad-free experience (with extra bonus features) on the Twitch gaming platform. And, of course, there's all the unique content that Netflix and Amazon are producing specifically for video. Both have plenty of growth ramp left in their member bases.

Consider that Netflix has about 111 million global paid subscriptions, just under half of which are U.S.-based. As it further expands its dominance globally -- and a Netflix subscription becomes increasingly a social expectation in countries outside the United States -- profitability will keep expanding.

Amazon's Prime subscription is more a gateway to its core consumer purchasing platform than anything else; the majority of Amazon's revenue still comes from product sales, which grew 17% year over year last quarter, excluding currency exchange. Its business-focused Amazon Web Services (which provides the resources for online site architecture) has become an incredibly popular product offering and shows another path to further growth for the company, with 44% in underlying year-over-year growth in the fourth quarter. Amazon's dominance across different aspects of e-commerce is only accelerating.

These stocks are going places

The Motley Fool doesn't always pick winners, because Tom and David Gardner and the analysts here are only human. (Side note: If someone says they have a 100% win rate with stocks, run -- it's impossible.) But these five stocks offer compelling risk-reward ratios, and long track records of outperformance that seem poised to continue -- and even, in some cases, accelerate -- for a long time hence.