Lumber Liquidators Holdings Inc (NYSE:LL) reported its fourth-quarter and full-year 2017 results before market open on Feb. 27. And if you only went by the market's response -- shares fell more than 18% at one point before recovering and closing down 9.3% -- you'd probably think it wasn't pretty. However, the company, which has more recently started showing signs that it is turning around, delivered a solid quarter to close the year.

And it's not just improving sales results. CEO Dennis Knowles continues to lead efforts to get operating costs under control, and there's evidence it's happening. Not only did sales increase, but gross margin and operating income improved, while several expense categories declined as a percent of sales. Let's dig in a little deeper and see how Lumber Liquidators did last quarter, as well as what management says about the future. 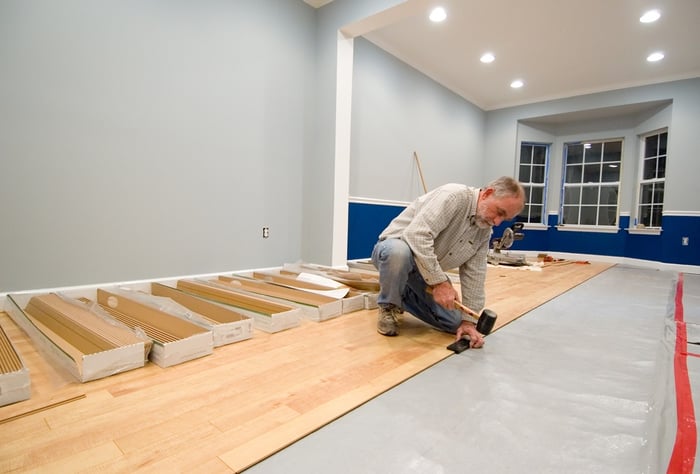 Here's a look at some key metrics from Lumber Liquidators' fourth quarter:

As you can see, the gross margin result was much higher, primarily due to selling more high-margin products, including vinyl and engineered flooring, and higher sales leverage due to comps growth (which included a nice 1.1% increase in customers invoiced). This is the key behind turning an operating profit of $600,000 in the quarter versus a $9.2 million operating loss in Q4 of 2016.

Lumber Liquidators' operating expenses also continue to improve. Sales, general, and administrative (SG&A) expense was $92 million, up only $2 million year over year. As a portion of sales, SG&A declined to 35.2% versus 36.6% last year. There were a lot of moving parts in SG&A expense over the past couple of years due to ongoing legal expenses that have largely been resolved. If we adjust for those non-recurring items specifically related to litigation, the company's adjusted SG&A was 33.3% of sales last quarter, versus 36.4% on an adjusted basis last year.

However, only some of the company's $3 million in net income was a product of the positive items above. It was largely due to a one-time $2.4 million benefit related to new federal tax legislation passed in the quarter. So there's still progress to be made.

Here are the full-year results:

As you can see, the fourth quarter was largely a continuation of the steady progress Lumber Liquidators made through much of 2017. In addition to the metrics above, full-year adjusted SG&A also improved. It was 34.5% of sales, down from 36.1% in 2016, as the company continues to get more efficient with its operations, even as the store count continues climbing higher. It ended 2017 with 10 net new stores opened during the year.

2017 was a solid turnaround year for Lumber Liquidators. The company made significant progress on putting its legal issues to rest, substantially cutting its losses related to ongoing expenses, and started improving on its sales and profitability results through a combination of better product mix and efforts to bring more customers to its stores -- as the 1.1% transaction comp demonstrates.

But there's still work to do to get more of those improvements to reflect in higher profitability. It sounds like the company is expecting to see that this year, with guidance for sales growth in the mid- to upper-single digits and adjusted operating margin in the low- to mid-single digits. If Lumber Liquidators attains the midpoint of its guidance -- $1.1 billion in sales and around 3% operating margin -- that would generate roughly a $35 million operating profit. That's a substantial improvement from the $37 million operating loss last year.

The company is also accelerating store expansion, with plans to open 20-25 net stores this year, more than double last year's total of 11. Based on the traffic and sales growth in recent quarters, there's reason to be hopeful the company's plans to return to a higher rate of growth should pay off for the long term.