It's been years since I've seen the inside of a bank branch. In fact, if I wanted to visit my credit union, I'd have to catch a flight. Its nearest office is more than 500 miles away from where I live.

I've moved several times, but my main checking and savings account has never moved with me. I thought this behavior was normal, even routine. After all, banks large and small have slashed their branch networks in recent years, a trend that accelerated after the financial crisis, presumably because branches just aren't as important as they once were.

But after spending the past decade mostly eliminating branches, at least two megabanks see more branches in their future. JPMorgan Chase (NYSE:JPM) and Bank of America (NYSE:BAC) plan to open hundreds of offices in the next few years, expanding into new markets and creating branches that look nothing like they used to.

Banks have a huge financial incentive to turn face-to-face transactions into faceless transactions over the internet. JPMorgan recently told investors that processing a check through its mobile app is 96% less expensive than if the same check were deposited in one of its its branches.

Those statements you used to get by mail? Yes, JPMorgan is happy to have eliminated those, too. It estimates that digital statements save it as much as $365 million in expenses like paper and postage each year. It's a mind-blowing amount of money, since, for that price, you can hire about 13 Jamie Dimons. 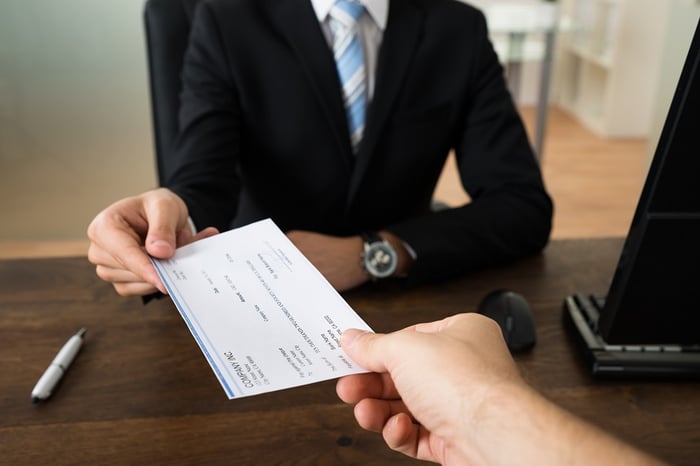 If digital banking is so much less expensive, why are banks so eager to open bank branches? It's really pretty simple -- even in 2018, branches are still the main way in which banks attract deposits, the inventory of the banking industry.

On a recent conference call, Bank of America's CEO, Brian Moynihan, told an analyst that only about 23% of its deposits were made digitally. In contrast, 30% of the money flowing into its clients' checking and savings accounts still came in the old-fashioned way -- through the front doors of the bank branch.

JPMorgan's experience is similar. The bank noted that in its consumer banking unit a whopping 75% of its deposit growth can be attributed to customers who use branches in one way or another. Amazingly, as many as three out of five of its banking households visited a branch in the fourth quarter of 2017.

The future for bank branches

New bank branches may look nothing like the branches of days gone by. A Bank of America executive told the Cincinnati Business Courier that some of its new Ohio branches will look more like an Apple store than a bank branch. That may be a bit of exaggeration -- if you're going to compare your retail business to someone else's, you always pick the best -- but it's safe to say new branches will operate a little differently from old ones.

Rather than have a line of tellers armed with pens chained to a desk, the publication wrote that "employees will be available to help a customer throughout the location rather than at the traditional teller line" and added: "Other branches will have people available to handle more complex needs."

JPMorgan said at its recent investor day that its newer branches are smaller, as branches built since 2012 use 20% less space. Flexibility is the name of the game, as the global bank said 75% of its branches could be exited in five years if it so desired. Banks typically lease their buildings, rather than tie up capital in real estate, a move that's proving to be smart as they think more carefully about which branches are truly necessary to keep their customers happy.

The truth is that JPMorgan and Bank of America don't have much choice in how they grow. How big banks grow is very different from how smaller banks do. When a community bank wants to expand, it has an easy avenue: Acquire the bank in the same town, or one nearby. With more than 4,800 banks in the United States, you can bet there's one for sale in almost every locale.

Large banks like JPMorgan and Bank of America don't have the luxury of growing by acquisition. By law, because each controls more than 10% of the country's deposits, they can't legally acquire another bank. So whereas Bank of America of 2005 might have expanded into Ohio by way of acquisition, today's Bank of America doesn't have that flexibility. It simply has to grow the old-fashioned way, by opening new offices. 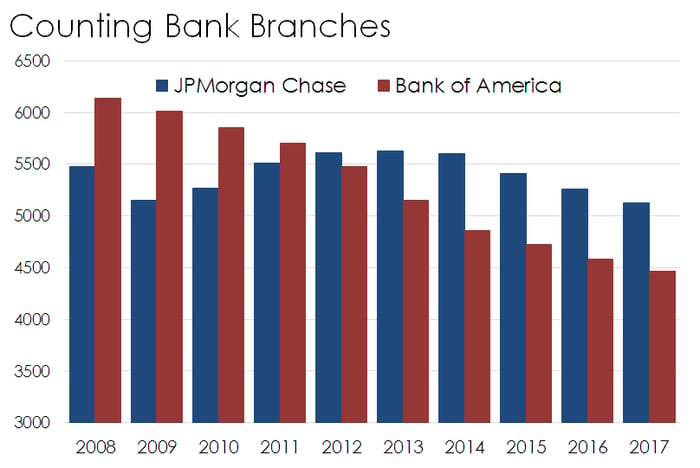 Data source: Bank of America and JPMorgan. Chart by author.

That means Bank of America could see its branch count increase for the first time in a decade, as it expands into new markets by opening 500 branches fit for a modern era. Since 2007, the bank has shed nearly 1,700 branches by simply closing them, or selling them to smaller regional banks such as Washington Federal, which is, technically speaking, about one-quarter Bank of America by branch count.

Likewise, JPMorgan could see its branch count increase as it adds 400 branches to expand into 15 to 20 markets where it says there are more than $1 trillion of deposits ripe for the taking.

Though the days of a branch on every corner may only exist in the history books, it's becoming clear that the megabanks have already shed most of the fat from their retail operations. If the giants want to grow, they'll need to move into new markets, and that means opening more branches.