There's been a lot of talk in the bank industry over the last few years about the future of bank branches -- or, rather, about whether or not they have a future.

Like the retail industry, customers have started shifting how they access financial products and services, such as checking, savings, and brokerage accounts. Instead of walking into a branch to make a deposit, they're instead using their smartphones to do so. 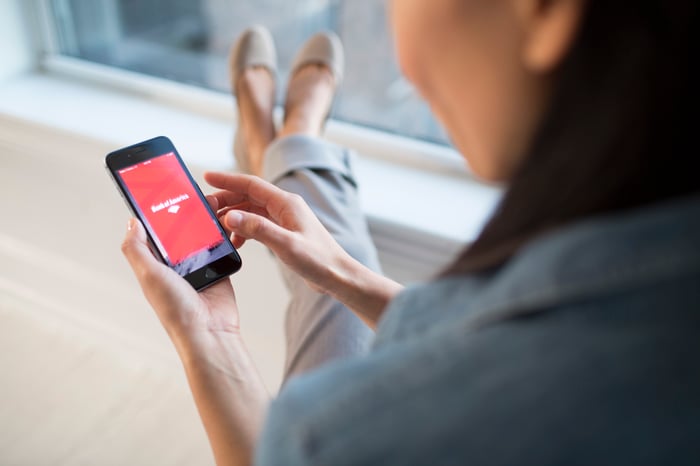 The appeal of mobile banking

The appeal of mobile banking is obvious: Why should someone drive 10 minutes to a branch to deposit a check when you can do so from the comfort of your couch in less than a minute? That's a rhetorical question, of course, because you wouldn't.

Mobile banking is also appealing from the bank's perspective. According to Bank of America (NYSE:BAC) chairman and CEO Brian Moynihan, it costs one-tenth as much to process a mobile deposit as it does for one that's made in a branch.

It's for these reasons that banks and their customers have eagerly adopted online and mobile banking. JPMorgan Chase (NYSE:JPM) has 29.3 million active mobile customers, the most in the bank industry. Bank of America is runner-up at 23.6 million, followed by Wells Fargo (NYSE:WFC) at 20.9 million active mobile users.

The impact of mobile banking on branches

The impact on these banks' business models has been considerable. Take Bank of America as an example. More than one in five deposits at the nation's second-biggest bank by assets are made on a mobile device. As the bank's chief financial officer, Paul Donofrio, explained on the bank's third-quarter conference call:

Also note the growth in mobile channel usage, this quarter we saw nearly 1.2 billion logins, which is up 19% versus Q3 2016 and more than 21% of all check deposit transactions are now done on mobile devices. This represents the volume of 1,100 financial centers and while important in terms of how we transact with customers, mobile has also become important in terms of how we connect with our customers.

The growing popularity of mobile banking has thus enabled banks to diversify away from branches as a delivery channel for financial products and services, freeing them to consolidate their expansive (and expensive) branch networks.

If you're wondering why bank branches are disappearing, then, the reason is that they're more expensive for banks to operate and less convenient for customers to access than online and mobile banking.