The major media industry saw another tremendous headline last week, with cable giant Comcast (NASDAQ:CMCSA) bidding $30.9 billion ($41 billion including debt), or 12.50 British pounds ($17.50) per share, for British cable company Sky TV (NASDAQOTH: SKYAY). The bid is higher than the current offer of 10.75 British pounds per share from minority-owner Twenty-First Century Fox (NASDAQ:FOX) (NASDAQ:FOXA) late last year. Fox, in turn, is in the process of selling most of its assets (including Sky), to Walt Disney (NYSE:DIS), complicating matters even further.

The media industry is always exciting, today even more so. Comcast's bid comes at a time when Netflix's global direct-to-consumer offerings are threatening the established order of the traditional cable industry.

Here's how Sky fits in with Comcast's businesses and the rationale behind getting into a potential bidding war with Disney. 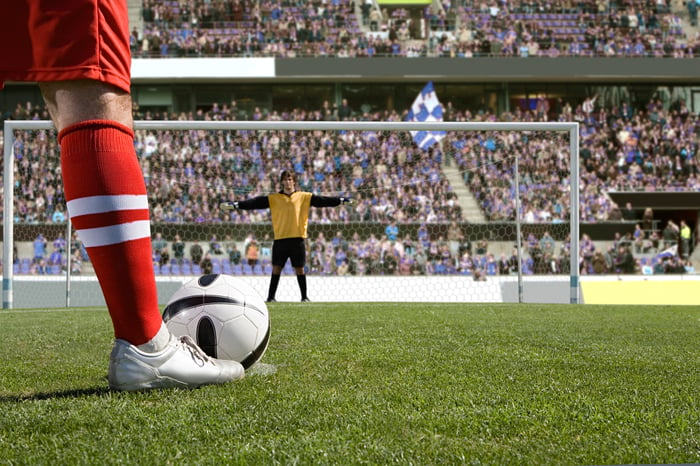 Sky is the largest internet and pay-TV provider in Great Britain, with 23 million subscribers across England, Ireland, and some of continental Europe, including Germany, Austria, and Italy. It offers bundled satellite TV, broadband internet, and wireless internet service, and also owns its content, most notably valuable sports rights for Premier League soccer. Like U.S. satellite company DirectTV (now owned by AT&T), Sky has also been experimenting with an over-the-top skinny bundle called Now TV.

Why Comcast wants to buy

So Sky has a bit of it all -- distribution, wireless phone service, and content. That's very appealing to Comcast, which basically has the exact same business model, except for wireless offerings (though Comcast and Charter Communications teamed up last year to deliver wireless by buying wholesale from other providers).

Sky also has significant scale, as its 23 million customers nearly matches Comcast's 29 million in the U.S. Thus, the integration of two similar businesses could yield a great deal of cost synergies, while giving the companies the ability to cross-sell content across a large subscriber base.  English-language content from both England and America has the potential to travel overseas, as Netflix's rapid international expansion has shown.

That will be more important as large and well-funded tech giants increasingly get into the content and distribution business. "In a world where you're getting into competition with Amazon, Google and Facebook, having scale" is important, said CEO Brian Roberts.

Roberts himself confirmed his decision to buy Sky by doing his own bit of scuttlebutt on a recent trip to London, during which he chatted up a London cab driver about the pros and cons of Sky's service. The Wall Street Journal reported Roberts later went to a Sky retail store in a Westfield mall, where he was impressed with some of Sky's technology for its internet-connected set-top box.

Interestingly, Sky's share price shot up to 13.47 British pounds after the announcement, which is 20% over Comcast's already-increased bid. That seems to indicate that the market is expecting a bidding war for the business, as Sky would also be a great fit for Disney. Premier League soccer would fit very well with Disney's ESPN, and live sports is the most coveted type of ad-based content in a world when ad spending is increasingly going digital and moving away from TV.

After being rebuffed by Fox (even though it had offered a higher price than Disney), Comcast is likely assessing how it will fit into a media landscape that is increasingly global and distributed directly over the internet. The rise of Netflix to over 100 million subscribers across the world has spurred a wave of huge media mergers, and the current theme among CEOs is to get bigger or else.

Both Disney and Comcast's stock fell on the news, and it's no wonder. The global media wars are becoming increasingly expensive. If you own media stocks, expect a bumpy ride.