When Tesla's (NASDAQ:TSLA) Powerwall was introduced in 2015 it was the first time a company had produced a well-designed energy storage system for the residential consumer. Other products existed, but they were in a pilot phase or weren't built to be the elegant solution Tesla was offering. But Tesla was also years ahead of the market, resulting in slow sales in the first three years for the product (most of Tesla's energy storage sales are the larger Powerpack). 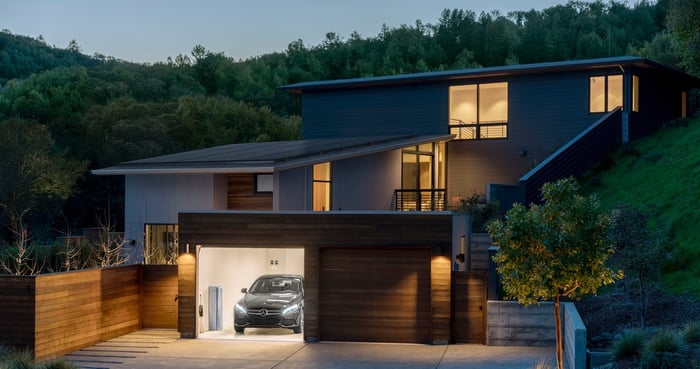 Vivint Solar is the No. 2 or No. 3 residential solar installer in the U.S., depending on how quickly Tesla's sales are declining, and it's starting to move into energy storage as well. Vivint has partnered with Mercedes-Benz Energy to provide energy storage solutions to consumers. The 2.5 kW-hr energy storage system can be scaled all the way up to 20 kW-hrs for a home and provides backup power or the ability to save solar energy for nighttime use.

Mercedes-Benz already has an energy storage business in Europe, where the energy storage market is far more advanced than it is in the U.S. If it can transition some of the technology it has there to the domestic market, it could put Vivint Solar in a leading position in energy storage.

Sunrun has developed an energy storage solution called Brightbox, which uses LG Chem batteries and Sunrun's own control system. The product is already available in Arizona, California, Hawaii, New York, and Massachusetts with more states likely to come in 2018.

The advantage Sunrun has in the market is its ability to scale to third-party installers with its technology solutions. Unlike Vivint Solar, Sunrun uses both internal and external installation partners, so when it launchs a product like Brightbox it can leverage a larger channel than competitors. And it can now claim the No. 1 market share in U.S. residential solar, a powerful position as energy storage becomes economical.

Scale will be important in energy storage because the storage company will have an incentive to monetize its installed base. The bigger the installed base, the more likely services like a virtual power plant or demand response can be provided to the grid, increasing value for Sunrun and its customers.

SunPower is a solar company that makes solar panels and the solutions that installers put on roofs, but it doesn't have its own installation teams. This allows SunPower to create an energy storage solution and distribute it to installation partners.

After years of pilot programs, in 2018, the company said it will launch a home energy storage solution, likely under the Equinox line of products. It'll come with an inverter that will be the brains of the home energy system and control a customer's energy based on their preferences. For example, some customers might want to maximize cost savings while others may want to maximize their solar energy consumption. The system can adapt to those preferences.

SunPower not only has a unique distribution model, its high price point means it serves the high end of the market, which may be more likely to adopt energy storage solutions. And we'll likely see some traction in this product beginning this year.

Technology and policy are finally reaching a point where it's economical to install energy storage in the home. Tesla was a leader in the industry, probably ahead of its time when the Powerwall was introduced. But in 2018 the industry is reaching a tipping point when significant sales will start and Tesla needs to keep an eye on Vivint Solar, Sunrun, and SunPower as three major competitors to the Powerwall, including the ability to offer solar plus storage to customers around the U.S.