The car parts industry has hit a few bumps in the road recently. Collectively its calendar 2017 was anything but a smooth ride -- it grew sluggishly because of several major factors, including an increase in gas prices starting in the summer, and unfavorable car demographics.

This, combined with the fear that Amazon (NASDAQ:AMZN) will plow into the segment and blow away the competition, has muted the prices of its notable stocks. This is true of AutoZone (NYSE:AZO), which saw its shares decline by almost 10% across 2017. Earlier this week the company published its first quarterly earnings report of this year. Here's how it did. 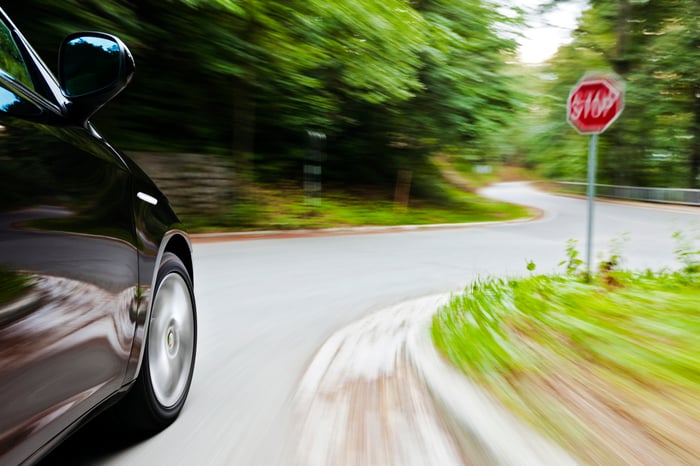 That top-line figure edged past the average analyst estimate of $2.39 billion. EPS, however, came in well under the $8.92 modeled by prognosticators.

In the company's conference call discussing the quarter, CEO William Rhodes said that higher sales in its "weather-sensitive" regions helped lift its results. Some of those areas suffered from rough winter conditions; difficult weather can initially be beneficial to auto parts retailers since vehicles often incur damage then, and their owners like to have them repaired quickly.

The winter of AutoZone's fiscal 2017 Q2 was comparatively mild. This, in turn, amplified growth in the quarter. Maybe that, combined with the big earnings miss, is why the company's stock closed down by 11% on the day the results were announced.

Racing back to present day, AutoZone also announced that it is selling a pair of its businesses. It will divest online-only retailer AutoAnything to private equity firm Kingswood Capital, and import parts wholesaler IMC to peer retailer Parts Authority.

AutoZone did not disclose the terms nor the price of either deal. Rhodes said the two businesses "were not core to our strategic priorities going forward."

Crashing into the market

As my colleague Lee Samaha points out, while weather and gas prices have an impact on car parts retailers, perhaps a heavier influence on their performance is the age of cars on the road. It seems that vehicles five to 10 years old are ripe for the "do-it-for-me" (DIFM) market. Cars older than that are better pickings for DIY-focused retailers like AutoZone.

So perhaps AutoZone is just in front of a nice, sustained increase in custom. In Lee's story, you'll see that year-over-year sales of new passenger cars, after dropping significantly in 2009, rebounded in each of the following six years. Meaning that the 10-years-plus demographic should theoretically begin expanding in the very near future.

However, while that develops, Amazon looms ominously in the background.

Last year, the New York Post reported that Amazon had struck deals with some of the largest parts manufacturers in the U.S. to sell their wares through its website, in an under-the-radar attempt to make it a player in the market. The newspaper said Amazon was offering these goods at comparatively bargain prices.

If Amazon makes a sustained, aggressive push into the segment, life could become quite difficult for AutoZone. In the battle between a bargain-priced online retailer and an operator heavy on the bricks and mortar, it's often the digital competitor who wins.

At the moment, the windshield is a little foggy -- it's tough to determine exactly how menacing a threat Amazon is just now. Plus, we don't know if and by how much that aging car demographic will translate into sales/profitability gains. So although I don't think investors should necessarily slam the door on AutoZone given its potential for growth, I wouldn't go piling into the stock either.

Should You Hit the Brakes on AutoZone After Its Big Earnings Miss? @themotleyfool #stocks $AZO $AMZN Next Article
Current