Shares of Intrepid Potash, Inc. (NYSE:IPI) took flight on Monday and were up more than 14% at 11 a.m. EST after an analyst issued a bullish commentary on fertilizer stocks.

An analyst at Cowen upgraded several fertilizer stocks today after a meeting with South American agricultural companies that yielded "game-changing" data. The analyst believes that there will be a major crop shortage in South America; in Argentina, for example, the corn and soybean crops might fall 10 million to 15 million metric tons short of expectations. 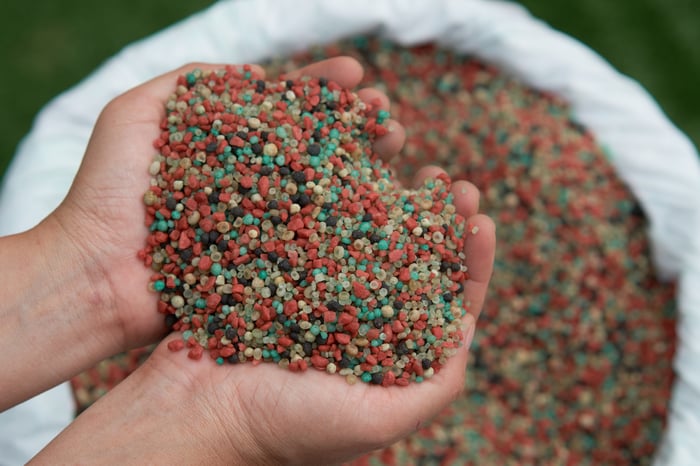 That led Cowen to upgrade several fertilizer stocks on the belief that the shortfall will drive a recovery in the price of fertilizer products. The analyst raised CF Industries (NYSE:CF), Mosaic (NYSE:MOS), and CVR Partners (NYSE:UAN) from market perform to outperform and boosted their price targets to $50, $32, and $4.25 per share, respectively. Intrepid Potash also received an upgrade, going from underperform to market perform, along with a price-target nudge from $3.50 to $3.75 per share. Finally, the analyst maintained Nutrien's (NYSE:NTR) outperform rating and $60 price target.

Those upgrades caused all five fertilizer stocks to trade higher today. Intrepid Potash was the only one to jump double-digits even though it's the lowest-rated one in the group. That's likely because the stock had further to rebound after tumbling last week on the heels of reporting weaker results than analysts expected due to issues with its turnaround efforts.

Intrepid Potash has been a very volatile stock over the past year because of its struggles with lower fertilizer pricing and the ongoing efforts to turn its operations around. That turnaround, when combined with the potential for higher fertilizer pricing, could enable the stock to continue recovering this year. That said, it's a higher-risk fertilizer stock that investors still might want to avoid for now.