It's looking more and more like a full-fledged travel company

Airbnb held an event in San Francisco on Feb. 22 to reflect back on the 10 years since it made its debut as airbedandbreakfast.com. That was back when it was still considered crazy to sleep in a stranger's house -- or to get into a stranger's car.

The story goes that the idea for Airbnb came in 2007 when Brian Chesky and Joe Gebbia decided to rent out space in their San Francisco apartment to people coming into the city for a big design conference.

At the time, this spur-of-the-moment idea helped the two men make rent for the month. Today, the company says Airbnb hosts who offer some of the most-booked "Experiences" on the site have made more than $200,000 in a year.

Airbnb's Experience feature, launched in November 2016, allows users to book activities on vacation, like a cooking class in Paris, an overnight sailing adventure on Cyprus, or a photo-shoot session in Times Square. The idea behind Experiences is that tourists would be booking these with hosts in the area, allowing travelers to experience a new place like a local.

Over the last 10 years, Airbnb has had over 300 million guest check-ins, and Airbnb hosts have earned over $41 billion in total. In the next decade, Chesky hopes that its relatively new Experiences feature will help the company reach 1 billion guests per year. 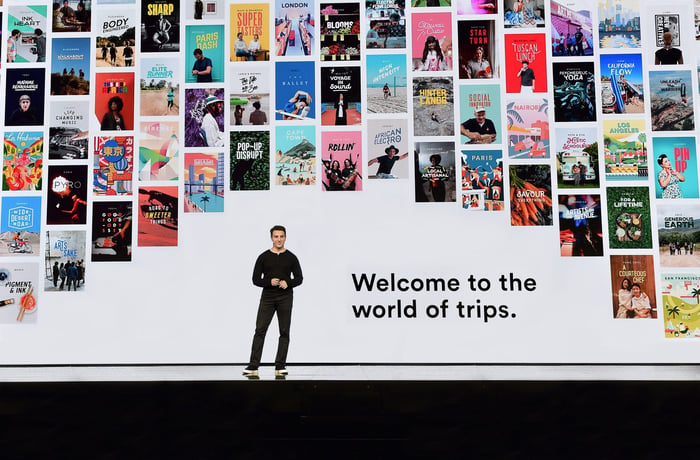 Airbnb aims to make you feel like you belong

The site's Experience tab now has 5,000 choices across 60 travel destinations and the company plans to expand Experiences to 1,000 destinations by the end of the year. It says the number of people booking Experiences has been growing fast.

Experience Hosts must be approved by Airbnb. "[H]igh quality is important and we select our Experience hosts based on expertise, local access and their ability to offer great hospitality," said the company. Chesky told Fortune in October 2017 that tens of thousands of people are on the waiting list to be an Experience host.

Chesky also told the publication that he had some "pretty audacious" revenue expectations for 2018, partly due to the success of Experiences. He said Airbnb had earned about $500,000 just from "social impact experiences," which allow guests to work with local charities when they travel.

When asked why the Experiences feature hasn't become a common topic of conversation, like the homes on Airbnb, Chesky said in the interview that it takes time for trends to catch on. The homes section of Airbnb was launched in 2008, but didn't start to catch on until a few years later. As of now, the Experiences feature is growing about 13 times faster than the homes business was in its first few years, Chesky said.

These Experiences are important for the company because it's looking more and more like a full-fledged travel company, rather than just a room-sharing site. It's similar to how ride-sharing app Uber has expanded into food delivery with Uber Eats. Both companies saw opportunities and took them. This added value for Airbnb users is also another reason for them to continue avoiding the typically higher-priced traditional hotels.

Airbnb is giving people a chance to avoid cookie-cutter hotel rooms in favor of a more authentic and personable experience. Chesky said during the event on Feb. 22 that he wants to focus on the company's core mission -- helping people feel like they belong anywhere they go -- rather than on taking the company public in 2018. On Feb. 25, Chesky was quoted in an interview as saying, "We’ve seriously considered a lot of things around aviation and we’ve spent a lot of time exploring different concepts. ... We definitely want to make sure, though, that we can get into the end-to-end trip business." This cranked up chatter that Airbnb was considering starting an airline.

Airbnb, now valued at $31 billion, has $5.5 billion on its balance sheet, according to Chesky.That, combined with the popularity of Experiences helps explain why Airbnb isn't in a rush to go public. For now, Airbnb has its work cut out: Make Experiences as popular as it has made the original home-sharing business.