Perhaps the prettiest story in retail over the past few years has been Ulta Beauty (NASDAQ:ULTA). The "All things beauty, all in one place" concept has really taken off under CEO Mary Dillon, with the retailer posting double-digit comparable-store sales over the past few years. That's unheard-of in a retail sector that's been otherwise roiled by e-commerce.

That growth story came off the rails late last year, though, as concerns about a slowing cosmetics industry and industrywide discounting caused Ulta to tumble 13% in 2017 despite otherwise stellar business performance. And 2018 is not treating the company any better, with a former employee accusing the makeup giant of unflattering sales practices in a series of recent tweets. 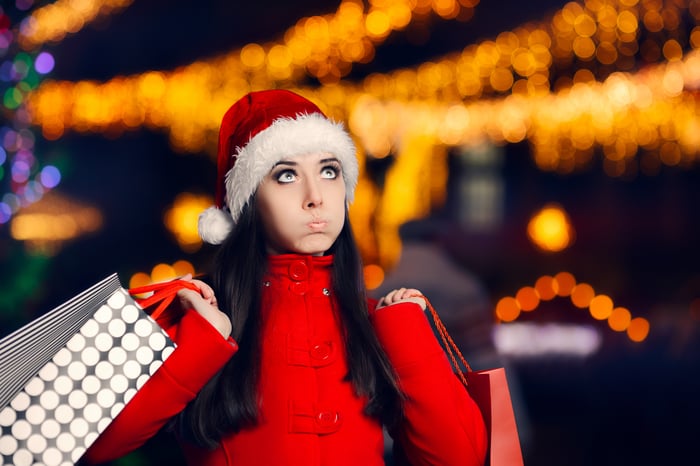 In mid-January, a former Ulta employee under the Twitter handle "fatinamxo" posted a series of tweets alleging her former managers routinely repackaged and resold returned makeup when an item was only slightly used. The tweet got some attention, with several other employees tweeting that they had experienced similar practices at their stores; however, other employees defended the company, with one saying she had "not once" seen anything like that in her stores after working at Ulta "for years."

Ulta, for its part, said in a video statement:

We do not allow the resale of used or damaged products. Our store associates are trained to catalog and then properly dispose of any used or damaged items. If associates have concerns that this or any Ulta Beauty policy is not being followed, they can anonymously report it through our third-party hotline. Our policies, training and procedures are aimed at ensuring that only the highest-quality products are sold in our stores and online.

In today's litigious environment, it is not surprising that the tweets eventually led to a class action lawsuit, and unfortunately for shareholders, the story of the lawsuit got picked up by CBS Sunday Morning recently, more than a month after the original tweet.

Ulta's stock has fallen nearly 10% since the start of the year, back near the 52-week lows reached last October, but has yet to report any numbers since the story hit (then hit again). The negative headlines are clearly wearing on investors, but it's unclear what impact this will have. Ulta had already been punished throughout 2017, but the business has been posting strong growth. In addition, Ulta will be a huge beneficiary of recent corporate tax cuts, as the company is a U.S.-only retailer.

According to estimates, the company is trading at a one-year forward price-to-earnings ratio of 17, practically half the valuation the market gave the company as recently as early 2017.

Should you be greedy?

After the allegations came out, an analyst from Oppenheimer defended Ulta, saying the violations were likely limited, and not a "numbers changing event."

But if that's the case, it makes the allegations doubly frustrating. Last quarter, Ulta grew revenue 18.6% on comparable-store sales of growth of 10.3%, with over $5.5 billion in revenue over the past 12 months. While Ulta does report revenue net of returns, I have a hard time believing product returns could make a significant difference in those numbers.

If there is any truth to the allegations, the unforced error could be caused by overly aggressive store-manager incentives. That seems to have been the case with the scandal at Wells Fargo (though this doesn't seem nearly as serious as Wells Fargo's situation). Recently, investor Charlie Munger said Wells Fargo, "had incentive systems that were too strong in the wrong direction." That may also be the case with Ulta.

However, suffering Ulta shareholders should know that Munger also said, "Wells Fargo will end up better off for having made those mistakes," and he and partner Warren Buffett are holding their Well Fargo stake.  It seems pretty likely that if these things were happening at certain Ulta stores before, they certainly won't be going forward.

But if Ulta has a store manager incentive policy that encourages these kinds of shortcuts, it would be good for Dillon and her team to review such policies as soon as possible. Ulta's numbers indicate the company has very happy customers, and store managers should be focused on them, not their store's returned inventory numbers.