Please ensure Javascript is enabled for purposes of website accessibility
Free Article Join Over 1 Million Premium Members And Get More In-Depth Stock Guidance and Research
By Tony Arsta - Mar 9, 2018 at 8:46AM

Information technology has grown into the largest sector of the economy for a reason.

Remember during the dot-com bubble of the late 1990s, when pundits liked to talk about the "new economy"? Riding the wave of excitement, the information technology sector grew to well over 30% of the S&P 500, from under 10% less than a decade earlier. The mania ended as companies like Pets.com disappeared while others, such as Cisco and Yahoo!, experienced traumatic share-price declines. It may sound negative to rehash those times, but here's the thing: The experts weren't entirely wrong.

While the mania of the late '90s got out of hand, the basic premise of the new economy has continued to play out. We are indeed transitioning from an industrial, manufacturing-based economy into one characterized more by services and information-based commerce. This evolution has opened new markets and new opportunities within industries that barely existed a few decades ago. Apple has grown into the largest company in the world by making the iPhone, Electronic Arts publishes video games that consume countless hours of leisure time, and Facebook gives you a way to connect with friends new and old. These businesses all grew to be the giants they are by creating new demand and making their industries larger.

And it isn't just a service-based economy that makes this industry so successful. These companies are built on the foundation of an incredibly profitable business model. This point can be easy to forget when we're constantly hearing about start-up unicorns like Uber that hand out stock options like candy and seem unconcerned about ever earning a profit. But the more mature businesses have already figured it out. Facebook, for example, keeps an astonishing 40 cents of profit for every dollar of revenue it records. Granted, very few businesses will ever reach that Hall-of-Fame level of success, but investors should be happy settling for a nice collection of All-Stars. 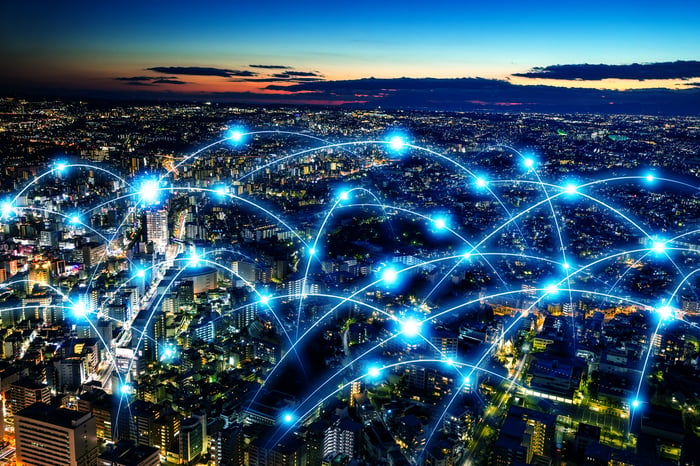 The secret behind the success of companies like Facebook, Microsoft, and Google parent Alphabet is the concept of incremental margins. After Microsoft puts in the effort to make its software, it gets to keep a larger portion of the cash from every additional dollar it earns. It isn't rewriting its software from scratch every time somebody new buys a copy of Windows, and it gets to spread out that initial cost over a larger base.

This phenomenon isn't unique to software companies -- any business with more fixed costs than variable costs benefits from economies of scale -- but the impact on technology companies can be much more extreme than in other industries. A manufacturer makes more money as it churns out more goods, but eventually, it will reach a physical limit and will be unable to produce more without building a costly new factory. There are diminishing returns. Google, meanwhile, will probably need to add more computers to its network if it grows from 3.5 billion searches per day to 5 billion, but by comparison, that additional cost will be relatively small.

Information technology has grown into the largest sector of the economy for a reason. These companies aren't among the world's largest simply because they affixed ".com" to the end of their names. These are real businesses that earn tremendous profits. As they grow larger, they're also able to use their scale and their vast troves of data to become even more successful. That's a winning business plan.

Bet on the future

You might be thinking -- isn't investing all about the future? Sure it is, but I'm still searching for a fortune-teller who can successfully pick stocks.

We've already discussed how companies like Facebook and Google are able to use their size to create enormous piles of cash. These businesses are then able to reinvest in ongoing research and development. In the past 12 months, Facebook spent more than $7 billion on R&D. That looks downright stingy compared with the $11 billion Apple spent, or Microsoft's $13 billion, or Alphabet's $16 billion. I'm willing to bet that all those investments will lead to something good.

It is difficult to fathom just how big of an impact machine learning will have. At the onset of the Industrial Revolution, most people probably couldn't grasp the societal changes that would be coming over the ensuing decades. For craft workers especially, the mass factory production that made their livelihoods obsolete was a very scary thing. Yet it led to unprecedented growth in the standard of living.

More recently, personal computers have changed the way many of us do our jobs. Rather than have a secretary to answer our phones and receive messages for us, we carry around smartphones that keep us connected to the office 24 hours a day.

Machine learning, and artificial intelligence more broadly, will bring about similar changes. The impact of self-driving vehicles, for example, is easy to envision. In a world where an automated taxi is moments away, will we even need to own cars? Will we be able to replace enormous parking garages with more exciting buildings, or un-pave parking lots to create more parks and green spaces? Perhaps even before that, self-driving vehicles will be used in long-haul trucking.

During the California Gold Rush, some miners were undoubtedly able to strike it rich, but many more left empty-handed. The most surefire way to profit from the rush was to sell equipment to all the hopeful prospectors streaming into town -- the so-called "picks and shovels" approach. This tried and true strategy has repeated over the history of commerce; Microsoft certainly benefited from selling its word-processing and spreadsheet software to seemingly every business. And these customers also grew and evolved from using the software.

In the coming decades, companies will be transformed by the use of data and algorithms. Companies like Alphabet, Oracle, and Salesforce.com will likely be the ones providing the new virtual picks and shovels.

Time for a class change

Let's back up and examine a fundamental question: What is the information technology sector?

This one sector encompasses many different things -- remember, it's nearly a quarter of the S&P 500 Index, after all. Within this sector, we include all the technology hardware companies, including Apple, Cisco, and Xerox. We also include semiconductor chip companies, such as Intel and NVIDIA. Then we throw in everything related to "software and services," which includes not only software-focused companies such as Microsoft and Facebook, but also service-oriented companies such as Paychex, Visa, and Western Union.

Given how much each of these groups has grown in the past few decades, it's no wonder that this one sector has become disproportionately large. David Blitzer, chairman of the Index Committee at S&P Dow Jones Indices, acknowledged this trend when he stated, "The internet began as a technological approach to sharing information; it has become the way many businesses operate." While the tech sector has continued to grow, the four smallest sectors -- materials, utilities, real estate, and telecommunications -- combined to account for less than 11% of the S&P 500 at the end of the year.

(I'm going to warn you right now: The next few paragraphs are rather dull, and you should skip them if you are about to operate heavy machinery. The details here aren't important to most people, but I, for one, find them to be quite interesting.)

I'm fascinated by the history of industry classification. For example, I'm tickled by idea that the Standard Industrial Classification system the U.S. government created in 1937 concluded that "Cookies & Crackers" merited its own industry code. But for the sake of our discussion, let's skip ahead to 1999. That's the year that two of the world's largest index providers, Standard & Poor's and MSCI, teamed up to create a new system called the Global Industry Classification System. This new system had 10 sectors: consumer discretionary, consumer staples, energy, financials, healthcare, industrials, information technology, materials, telecommunications services, and utilities. It further divided each sector into an additional three layers. Today, there are 11 sectors (real estate graduated to its own sector in 2016), 24 industry groups, 68 industries, and 157 sub-industries.

But the biggest change is coming.

In November, following its annual review, S&P and MSCI announced the latest changes to GICS, to take effect in September 2018. The telecommunications services sector has been demoted to an industry group to be included in a new sector named communications services. This sector will also be the new home for the media and entertainment industry group. Separately, online marketplace companies are going to be reclassified into the consumer discretionary sector; previously, they were split between consumer discretionary and information technology, depending on whether they held their own inventory.

Where do these changes leave us? To be quite honest, we don't know yet. The full list of companies affected will be made available in August 2018. It seems likely that Facebook and Netflix will be two of the higher-profile companies that move into the communications services sector. But what about Alphabet? And will Amazon.com remain classified as consumer discretionary? It's something to keep an eye on as the year progresses, and you should definitely pay attention if you own any sector ETFs or similar products.