Star Trek ended its original broadcasts a few months before I was born and didn't come back (in The Next Generation form) until I was wrapping up high school. Even so, Star Trek has been a big part of my life -- enough so that when I heard that Dr. Ethan Siegel, a Lewis & Clark College astrophysics professor, had just published Treknology, a book on Star Trek technology, I jumped at the chance to grab a copy.

I'm glad I did, because as Siegel explains, Star Trek has affected all of our lives already -- and will probably continue to do so for decades to come. 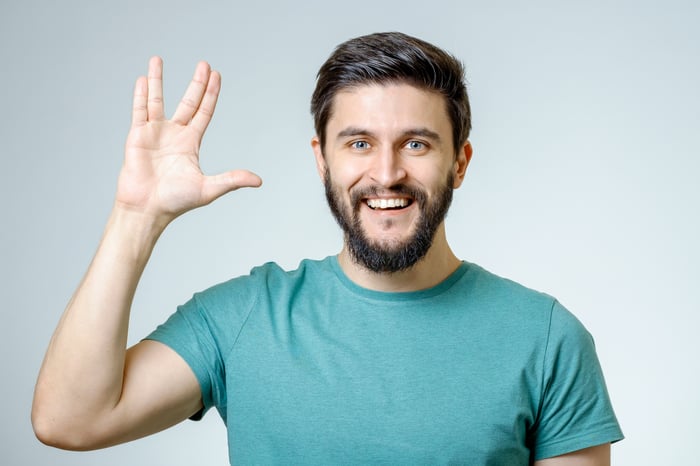 For example, you may be reading this column on your smartphone. Well, did you know that cellphones owe their existence directly to inspiration from Star Trek?

It's true. As Siegel reminds us, when Star Trek debuted in 1966, phones were corded hunks of plastic, provided by the telephone monopoly. "Copper wires were state of the art," he writes, and wireless cellphones weren't even on the horizon until Star Trek suggested the "communicator" -- and got inventors thinking about how something like that might work in reality.

Fast-forward 17 years, and Motorola scientist Marty Cooper invented the first wireless phone. Another 13 years after that -- 30 years after Star Trek debuted -- Motorola released the first "clamshell" cellphone, freakily similar to Star Trek's flip-top communicators in appearance, and costing $1,000. (Historical note: Apple's (NASDAQ:AAPL) $1,000 iPhone X price tag actually is not without precedent!) It was hard to mistake the phone's Star Trek heritage. But just in case the clamshell design didn't clue you in, Motorola actually called its new phone the StarTAC.

Or consider Apple's iPad. It's a direct descendant of the Portable Auxiliary Display Device, introduced in Star Trek: The Next Generation, right down to its abbreviation: the PADD. For that matter, the same flash memory that's essential to making both smartphones and iPads function -- flash memory chips -- ultimately derives from Star Trek's vision of a high-density optical storage device (dubbed the isolinear chip ).

When Star Trek debuted, Siegel says, "the sum total of every computer system on Earth," running on magnetic tapes, "was less powerful than a single one of today's entry-level smartphones." Thanks largely to Star Trek's envisioning ways to store more data on smaller devices, today's "reality leapt past [Star Trek's vision of the] twenty-fourth century more than three hundred years early."

So what are the chances we will see other pieces of Star Trek tech come to life in our lifetimes, and ahead of schedule? Better than you might think.

Take transparent aluminum, for example -- a plexiglass alternative from which Star Trek viewports will supposedly one day be made.

Siegel notes that aluminum atoms, when bound to oxygen atoms to form the mineral corundum in nature, are "incredibly hard," "extremely dense," and "naturally transparent." When artificially created, we call such substances "transparent ceramics." As far back as 1980, scientists were producing transparent aluminum ceramics such as aluminum oxynitride (AlON) -- incredibly expensive, but "85% as hard as sapphire" and "more than 80% transparent."

All that remains now is to leverage advances in nanotechnology to scale up the production of such materials (which work best now when used only in very thin coatings), and drive down costs. Siegel thinks "it would be shocking if AlON" or some similar transparent metal is not in widespread use before the end of the century. By that time, Blue Origin's space tourism flights should be making regular round trips to the ionosphere -- and tourists will probably be viewing Earth through transparent aluminum viewports.

"Space windows" are pretty great, no doubt, and good for keeping tourists safe from meteorites on planetary viewings. But what about keeping astronauts -- or even Mars colonists -- safe from the hazards of cosmic radiation while traveling between planets?

Siegel notes that the best way we currently know to keep astronauts safe from cosmic radiation is to shield them from those rays with "a spacecraft hull many meters thick" -- which would both add to the cost of building spacecraft, and increase the amount of fuel needed to move them. An alternative, though, may lie in Star Trek's vision of a deflector shield.

Primarily designed to ward off hostile attacks from Klingons, Romulans, and the like in the Star Trek universe, deflector shields -- as Siegel points out -- might have more practical benefits in the real world, like protecting astronauts from harmful, natural radiation in space. Deflector shields would work by releasing "an ionized plasma some distance from a ship," held in place by "a strong magnetic field" to form what Siegel calls a "plasma mirror." A sufficiently dense plasma, he says, could deflect away harmful radiation much like the ionosphere shields us from such radiation here on Earth.

"Magnetic fields" and "ionized plasma" may sound like concepts just as far-fetched as deflector shields. But in fact, what Siegel describes sounds not too much unlike the technology that Lockheed Martin (NYSE:LMT) is using in its experiments in nuclear fusion, which suggests the technology may not be quite as far out as it sounds. According to Siegel, the tech needed to build a workable deflector shield to keep astronauts safe on their voyages to Mars "is well on its way to becoming a reality."

Siegel's Treknology contains updates on literally dozens of various technologies first envisioned in Star Trek, which could soon become real-life technologies. But I'll give you just one more: tractor beams.

A working tractor beam would be useful in real life for everything from saving satellites from deteriorating orbits, to cleaning up space junk, to lassoing asteroids for scientific research. There's just one problem: In Star Trek, tractor beams are composed of "gravitons" -- and we don't actually know what a graviton even is.

But we do know a lot about lasers, and Siegel cites research showing that in 2013, a team of scientists at the University of St. Andrews in Scotland demonstrated the ability to use multiple lasers to "pull a particle toward a light source" -- just like with a real-life glowing tractor beam. Siegel calls this an "optical tweezer," and notes that so far, the technology can only be used to move "microscopic particles."

But again, with the basic concept proven, there's at least the possibility that with sufficient time, money, and work, it should be possible to scale up this technology to the point where a real, honest-to-goodness tractor beam becomes a reality.

Beam me up, I'm done

Not everything seen in Star Trek has yet come to pass, or will in the near future -- or perhaps ever. As Siegel observes, "there is no such thing as subspace" to facilitate instantaneous communication between solar systems. "Gravitons" instrumental to treknologies like artificial gravity "may not even physically exist." And warp drive between star systems, while "theoretically plausible" and proven by Mexican theoretical physicist Miguel Alcubierre to accord with Einstein's theory of relativity, is still far beyond our ability to achieve today.

Then again, in 1966, even cellphones seemed far-fetched -- 50 years from now, any one of the technologies described above could seem as commonplace as your smartphone seems today.