Nintendo (OTC:NTDOY) has been on a roll over the last two years, delivering a hit new hardware platform, releasing well-received new games for its consoles, and building its position in the mobile space. The table below shows the company's performance over the trailing nine-month period compared to the same stretch in the prior fiscal year.

The Japanese gaming giant deals in a range of geographic segments, and its results are significantly affected by currency fluctuations, so the comparisons above are a bit imprecise on an American-dollar basis, but the dramatic upswing is still impossible to miss. Read on for a look at five key quotes from Nintendo's February corporate management policy briefing that provide additional insight on what's happening at the company and what investors can expect going forward.

Nintendo's entrance into the mobile space has been a big part of the company's turnaround over the last several years. With the near-ubiquity of smartphone and tablet devices and the gaming giant's fantastic collection of intellectual properties, the company is looking to mobile platforms to expand the reach of its franchises and supplement their popularity. So far, the results have been very encouraging. The following section from the company's prepared comments summarized the performance of key titles in the segment:

In our smart-device business, consumers not only continued to enjoy Super Mario Run and Fire Emblem Heroes, which became available for download during the previous fiscal year, but also had fun with Animal Crossing: Pocket Camp, released globally during October and November. Smart devices and IP related income came to 29.1 billion yen.

The December-ended quarter's 29.1 billion yen in sales for the segment represents a 172% increase compared to the prior-year period, and investors can bank on more big growth going forward. The company also announced that it plans to launch Mario Kart Tour on mobile devices before the end of its next fiscal year -- a title that's likely to be a huge hit.

While the push into the smartphone software space has already proven quite successful and presents a big growth opportunity, Nintendo is still a business that hinges on having successful hardware platforms. Just a few years ago, the commercial failure of its Wii U gaming console cast a shadow over the company's outlook. However, better-than-expected longevity for its 3DS handheld platform and an explosively successful first year for its Switch console have the business booming again. Here's what Nintendo CEO Tatsumi Kimishima highlighted in hardware and software sales performance for the company's platforms:

As the chart below shows, sales for the Switch console are trending above those for the company's hugely successful Wii system and absolutely trouncing the performance of the Wii U platform. 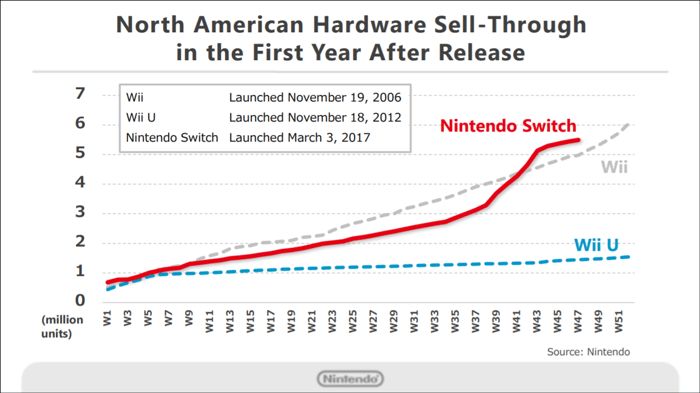 Kimishima also reported that North American 3DS sales are actually trending up in the months following the Switch's launch. Nintendo's newest console also doubles as a portable gaming device, so the fact that sales for its dedicated handheld platform are proving so resilient is impressive and bodes well for the company's near-term earnings results.

Switch owners are currently able to partake in online multiplayer modes for compatible titles, but the console lacks the more robust online services that are available on competing platforms like Sony's PlayStation 4 and Microsoft's Xbox One. Nintendo is readying its own paid-online service, but it's taking some time for the project to come together. The company's for-pay service was originally due to debut in fall 2017 but was then pushed to a spring 2018 window and has since been scheduled for a September release. Here's what Kimishima had to say when asked about the evolution of the Switch's online platform:

We view the online service as one component of our efforts to diversify how our games are played and to get people to play more of our games. That is why we want to apply substantial resources to the online service, with the thinking that we will devote our energies to making this a for-pay service.  As for how we plan to popularize the service, it is less about the mechanism and more a question of what kinds of products we can offer, and the spread of the service will depend on whether consumers want what we offer.

The company has lagged its competitors in the console hardware space when it comes to online functionality, but Sony and Microsoft have proven that paid online services can be hugely profitable, so Nintendo is looking at a big opportunity if it can deliver. The service is also likely to debut alongside an online store for downloading classic Nintendo games onto the Switch platform -- another significant opportunity because the cost of rereleasing these games tends to be very low.

With its massive population and quickly growing middle class, China is a market that many technology and entertainment companies have a keen interest in. However, tight government regulations mean that getting your products into the Middle Kingdom isn't as simple as sending them to retail distributors or putting them up for download. Here's how Kimishima outlined the company's current thinking on expanding its presence in the Chinese market:

We would like to see the people of China also experience Nintendo's forms of play and the games that people in other countries enjoy now. How best to achieve this is a subject we are working through point by point, consulting with various other parties on aspects we cannot tackle alone. I would like to realize this as quickly as possible, but there is nothing I can say at this time about activities that will start within the year. Regarding the expansion of our smart-device business in China, it would be better to collaborate with local carriers rather than go it alone, but as of now there is nothing I can say on this topic either.

Companies like Activision Blizzard, Electronic Arts, and Sony have already found success in getting their content into the Chinese market by partnering with China-based companies like NetEase and Tencent Holdings, and it seems likely that Nintendo will pursue a similar route.

Nintendo has the single most valuable cast of characters of any major video game company. After an ill-fated attempt to bring the Mario franchise to the big screen back in 1993 and a string of mostly unsuccessful video game movies based on other company's properties, Nintendo has been hesitant to pursue film adaptations. However, the company has recently been making efforts to build its character-licensing business and has been working with Comcast and its Universal divisions to bring famous video game properties to theme parks and the big screen.

Nintendo's creative director, Shigeru Miyamoto, shared his take on working with Universal and Illumination Entertainment on the in-development Mario movie:

As a producer, Chris Meledandri (Illumination's CEO) is noted here for movies like Minions and Sing, but he is a veteran with a ton of experience, including the movie Ice Age and stints at companies like 20th Century Fox Animation. When I talked with Chris, he said he had read a lot of interviews with me and felt we had a similar approach to creation. Talking about our similarities, we clicked and decided maybe we should do some kind of collaboration. We started our conversation over two years ago, and finally reached a the stage where we could make an announcement. Chris is extremely cost-conscious and time-conscious in his quest to make successful movies. We decided to try making a movie together, and distributing the completed movie globally through Universal Pictures.

Miyamoto also noted that Nintendo isn't averse to scrapping the Mario movie project if doesn't seem like it will do justice to the property. That's evidence of an admirable degree of protectiveness and a long-term approach to generating value from its franchises, but there seems to be a good chance that Nintendo and Universal will be able to come up with something that works -- creating big cross-promotional opportunities and paving the way for other film adaptations.