Shares of Boeing (NYSE:BA) have dropped nearly 5% as part of the sell-off prompted by President Donald Trump's move to impose steel and aluminum tariffs, a natural reaction given the company's commercial and military jets are constructed using significant amounts of metal.

Trump announced a 25% tariff on imported steel and 10% on aluminum, subject to certain carve outs, and implied there could be some flexibility to grant new exceptions in the weeks to come.

Should he proceed as planned the real threat to Boeing and other aerospace primes isn't higher metal costs, but rather the potential for lost business should the tariffs cause others to retaliate. Here's what's at risk, and what investors in Boeing should watch for as the tariff saga continues to play out.

Though not as exposed as the automakers or heavy equipment manufacturers, Boeing is without doubt a major user of the metals subject to the tariffs. Aluminum, for example, accounts for more than half of the structural weight of both its 737 and 777 commercial airframes. 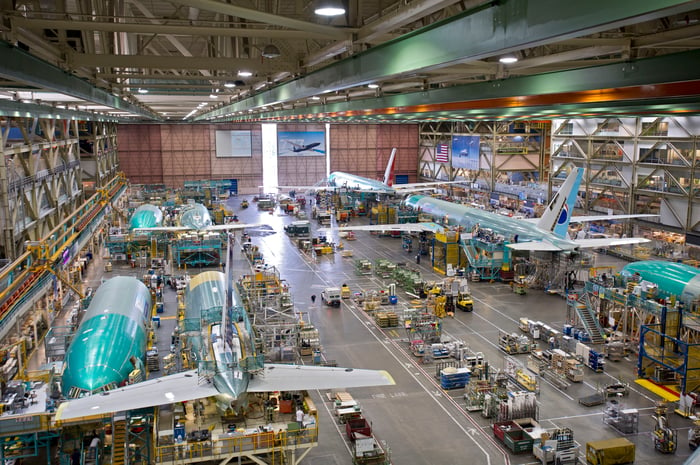 But Boeing makes most of its money based on its engineering, with Cowen analysts estimating that materials are only responsible for about 20% to 25% of the cost of an airplane. And much of that aluminum is sourced by Boeing's suppliers, on contracts that are often either fixed or difficult to easily alter.

Further, Boeing and its suppliers are used to dealing with changes in commodity prices. Aluminum prices climbed by about 30% in 2017 without affecting Boeing's profitability. At some level, productivity gains, price escalators built into contracts, and other buffers would prove insufficient, but Boeing, with its 5,800-plus plane commercial backlog, has ample flexibility for the time being.

One final factor that should help Boeing is the growing popularity of the 787 Dreamliner, which accounts for more than one in ten of the planes it has on order, and which continues to gain new customers, such as its recent order from Hawaiian Holdings. The Dreamliner is about 50% comprised of composite materials, meaning it uses significantly less aluminum and steel than other jets in the Boeing family.

...but a trade war could still be damaging

The bigger worry for Boeing investors is that the company could lose out to archrival Airbus (OTC:EADSY) for future orders thanks to the increasingly nationalist rhetoric coming out of Washington. Europe, Airbus' home base that has already said it will respond to the tariffs, accounts for about 16% of the Boeing commercial order book, according to Cowen estimates, and China -- the primary target of Trump's actions -- is both about 5% of total identified orders and also believed to be a large portion of the 19% of the order book that is unidentified.

The military side of Boeing is just as vulnerable. Boeing's very public dispute with Bombardier that led the U.S. to try to impose a nearly 300% tariff on CSeries jets angered officials in Canada and the United Kingdom. Because of the CSeries issue, Boeing's F-18 Super Hornet is no longer the clear favorite to win a $12 billion deal to modernize Canada's Air Force, and anger over both the tariff and Trump's efforts to renegotiate NAFTA could lead Canada to look to Europe for its new jet.

Trump already has traditional U.S. allies on the defensive, with his demands that western European governments increase their defense budgets leading to movements in those countries to invest in growing European defense firms instead of spending money on U.S. armaments. Boeing and other defense primes have in recent years tried to diversify their businesses by adding to foreign sales, and the president's actions could put those efforts at risk.

Canada, along with Mexico, were exempted from the Trump tariffs when they were announced March 8. But the exemption, which was presented as a carrot to entice a NAFTA renegotiation, could still lead to a level of resentment.

And by not exempting other allies -- the administration said other countries could be considered for exemptions -- the President risks pushing Europe and the United States further apart. British trade minister Liam Fox speaking on television Friday morning said it was "doubly absurd that we should be caught in an investigation in national security," calling protectionism and tariffs poor solutions.

Lockheed Martin CEO Marillyn Hewson during the company's investor day earlier in the week said she has not yet heard from any angry customers about the tariffs but admitted it was too soon to say whether the levies would eat into business.

The tariffs are not ideal, but the sense here is that it would take a much broader -- and prolonged -- trade war to really damage the bottom lines at Boeing and the defense primes. There is no reason to panic-sell based on what has come out of the Commerce Department.

But tense relationships with allies and higher raw material prices are two additional headaches for the industry to navigate. With shares of Boeing up 91% over the past year, and shares of defense primes up between 42% and 18%, this is a fresh reason to question how much further the group can run. 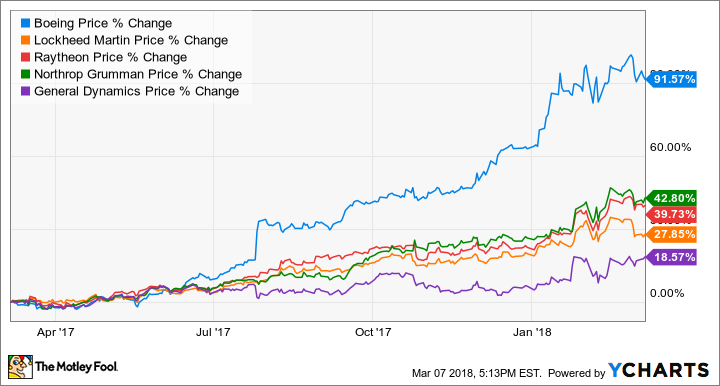 There are still selective buys to be found among defense stocks, but overall, it feels like the risks to the sector are beginning to mount. Tread carefully.