Corcept Therapeutics (NASDAQ:CORT) stock lost 34% in February, according to data provided by S&P Global Market Intelligence. Shares collapsed after it was announced that Teva Pharmaceutical Industries (NYSE:TEVA) had filed a patent to bring a generic version of Corcept's Korlym drug to market.

Korlym is a used to treat symptoms of Cushing syndrome and currently the only drug that Corcept Therapeutics has on the market. The company announced on Feb. 5 that a generic alternative from Teva could soon be available -- news that has potentially dramatic implications for Corcept's outlook. 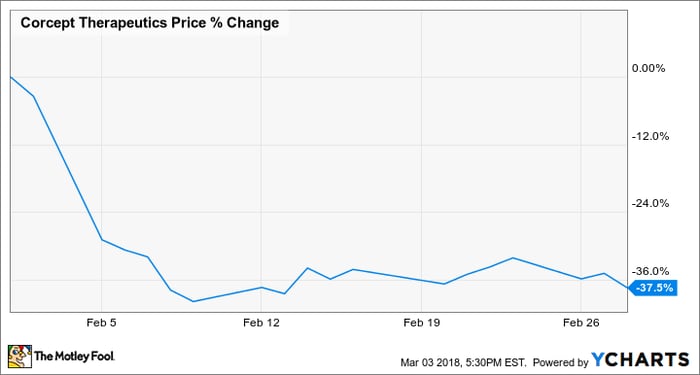 Shares tanked following the news, which also seems to have dampened the impact of a strong earnings report. The company posted fourth-quarter results on Feb. 22, with sales for the period climbing 124% year over year to reach $53.3 million, and earnings per share rising from $0.04 per share in the fourth quarter of 2016 to $0.77 per share.

The company is guiding for sales between $275 million and $300 million for the current fiscal year, representing roughly 80% year-over-year growth at the midpoint. Management expects sales gains to be driven by an increasing number of doctors prescribing Korlym and a 6% price increase for the drug, so the short-term growth picture looks quite good.

Corcept has stated that it plans to contest Teva's right to bring a generic Korlym alternative to market in court, and the pending lawsuit will delay any possible Food and Drug Administration approval of Teva's drug by at least 30 months. The outcome of the litigation is something that investors should pay attention to, but the threat posed by Teva's rival product might also be overstated.

Corcept has other products in development, with four other drug compounds currently in the testing phase. Management announced that it was seeing promising results in the testing phases for Relacorilant -- another drug for treating Cushing symptoms but one that has fewer side effects than Korlym. Management thinks that Relacorilant could render its current Cushing drug obsolete.

Corcept remains a risky play, but the stock also has big upside in light of recent sell-offs, the potential to block Teva's Korlym alternative in court, and other products it has in the pipeline.