TJX Companies (NYSE:TJX) is by far the largest off-price retailer in the world. Revenue has been rising by more than $2 billion annually in recent years, reaching a record of $35.9 billion in the recently ended 2018 fiscal year. By contrast, Ross Stores (NASDAQ:ROST) -- its largest rival -- brought in just $14.1 billion of revenue during the same period.

Despite its massive size, TJX has been remarkably successful at developing new retail concepts that can expand its addressable market. It has also cracked the code to international expansion (at least to some extent). As a result, it has room to continue growing for many years to come.

For the past five years, TJX has opened new stores at a steady pace of roughly 200 per year. This has increased its store count from 3,050 at the end of fiscal 2013 to 4,070 by the end of fiscal 2018. Its home-focused chains -- HomeGoods and HomeSense -- have expanded at the fastest rate, but all of its retail concepts have grown significantly during this period.

This combination of new stores and comp-sales growth has allowed TJX to increase its revenue by more than 30% over the past five years, despite facing some currency headwinds. 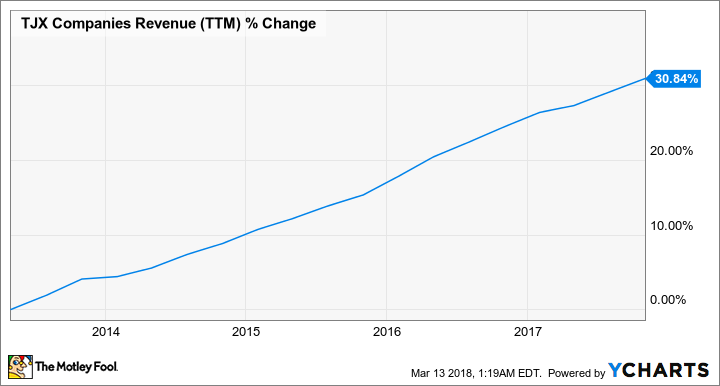 Last quarter, TJX's comp-sales growth rebounded to 4%, which is a promising sign that the slowdown earlier in the year was just a blip. Furthermore, there seems to be plenty of room for the company to continue adding stores.

At the beginning of every fiscal year, TJX publishes a new long-term store growth target. This year, the company raised its target significantly. TJX now expects to open 6,100 stores in the long run, up from a goal of 5,600 in last year's update. This would represent a roughly 50% increase in the store count from today.

The biggest driver of this increased growth target was the launch of a second home furnishings chain (HomeSense) in the U.S. last year. Management sees room to open 400 HomeSense stores in the domestic market. Additionally, TJX raised its store target for Canada from 500 to 600, as it is rapidly approaching the former number and the TJX Canada segment has posted the highest comp-sales growth in the company for three years running.

TJX's runway for growth is remarkable considering that Ross Stores pegs its long-term growth potential at 2,500 stores. (This would also represent a roughly 50% increase from today.) The main difference is that Ross Stores only operates within the U.S., whereas TJX has stores in nine countries. Additionally, TJX now has five retail concepts in the U.S., all of which are growing, compared to just two for Ross Stores.

In the long run, I wouldn't be surprised if TJX exceeds its current growth target by a wide margin. For example, the company is still refining the business model for its outdoor-focused Sierra Trading Post chain. It more than doubled the Sierra Trading Post store count to 27 locations in fiscal 2018, and it plans to open another eight this year. Further growth of this chain isn't included in TJX's long-term store targets.

Meanwhile, TJX's growing footprint in the U.K., Ireland, Germany, Poland, the Netherlands, and Austria gives it a foundation for expanding into the rest of Europe, whereas the official store growth target only includes countries where the company already operates.

TJX has invested heavily in recent years to enable its future growth. These investments are likely to pay off in a big way for investors over the next decade.