Broadcom's (NASDAQ:AVGO) $117 billion dream of picking up Qualcomm (NASDAQ:QCOM) in a hostile takeover is no more. Monday evening, President Trump signed an executive order to halt the proposed merger in its tracks.

Here's what you need to know about the canceled Broadcom-Qualcomm combination, and what's next for these companies after Trump's order. 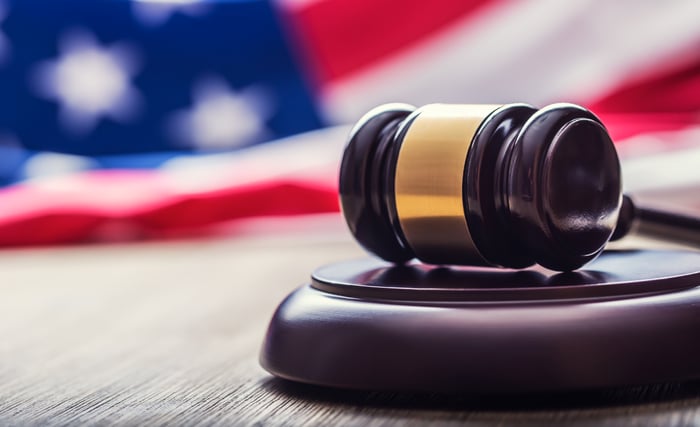 How they got here

Just two days before Qualcomm shareholders were to have their say in the matter by voting on either Broadcom's proposed board nominees or the official Qualcomm slate, the federal Committee for Foreign Investment in the U.S. (CFIUS) stepped in to break up the party and ordered a 30-day review period. CFIUS is the arm of the Treasury Department tasked with ensuring that foreign investments in U.S. companies won't pose a threat to national security.

In the light of a Bloomberg report that painted Broadcom as the likely winner of all six board seats it was seeking, Qualcomm was more than happy to reschedule its shareholder meeting to April 5.

The CFIUS action was actually prompted by a request from Qualcomm, which was unusual because the committee usually doesn't review anything until an actual deal has been agreed to. Broadcom blasted the delay as lowly "engagement theater." While Qualcomm shot back that its suitor wanted to mislead shareholders by moving their attention away from "serious regulatory and national security issues" in the deal.

Over the next couple of days, Broadcom bent over backwards to please CFIUS and other critics of the deal. The company accelerated its plan to move its legal headquarters from Singapore to Delaware and promised to provide $1.5 billion to train American engineers. CEO Hock Tan sent letters to every U.S. senator and representative, extolling the benefits of this takeover -- stating that only a Broadcom-led version of Qualcomm can lead the developing standards for 5G wireless products in a direction that puts U.S. interests ahead of China's.

On the other side of the table, former CEO Paul Jacobs stepped down from his role as Qualcomm's executive director and took a regular board seat instead. Separately, The Wall Street Journal caught wind of Intel (NASDAQ: INTC) possibly launching its own, even larger, takeover of Broadcom if and when the Qualcomm deal closed indicating that the world's largest chip maker would prefer emptying every coffer to buy out both companies rather than facing competition from these two rivals in a single monolithic body.

Trump's executive order cancels Broadcom's proxy card for Qualcomm's board elections, stops Qualcomm from accepting Broadcom or anyone else renominating any of these 15 names, and explicitly forbids Broadcom or any of its subsidiaries from trying to acquire Qualcomm in any way, shape, or form.

The order states that Broadcom "might take action that threatens to impair the national security of the United States," and that no other legal remedies to this threat exist. So it's full stop, with no further explanation of exactly how Broadcom owning Qualcomm would pose a national security risk beyond CFIUS's concerns, which included that a "weakening of Qualcomm's position would leave an opening for China to expand its influence on the 5G standard-setting process."

If the companies drag their feet on unwinding this tangle, the Attorney General is instructed to enforce this order by "any steps necessary." Qualcomm's shareholder meeting, which must now take place no later than ten days after this order, is scheduled for March 23.

So that's the end of Broadcom's ambitions of owning Qualcomm. The chip maker may turn its sights on other targets instead, continuing a long-running strategy of growth by acquisition. But if Qualcomm is off the table for reasons related to industry standards and national security, the same would most likely be true for similar-sized targets Texas Instruments (NASDAQ: TXN) and Micron Technology (NASDAQ: MU).

Broadcom may have better luck hunting for smaller game in more specialized niches, or it could sidestep ornery American regulators by looking for big merger opportunities in Europe and Asia instead. There are many possible targets there, many of which would match well with Broadcom's existing product portfolio. All things considered, it would not be surprising if Broadcom were courting Geneva-based head-to-head rival STMicroelectronics (NYSE: STM) next.

Across the table, Qualcomm got exactly what it wanted and can now focus on its pending merger with NXP Semiconductors (NASDAQ: NXPI). That deal needs one final approval from Chinese regulators, who may or may not have been waiting for the Broadcom-related uncertainty to resolve itself first. Adding NXP gives Qualcomm a larger presence in digital ID and security solutions, but this deal is mostly about putting Qualcomm in the driver's seat of the automotive computing market.