Please ensure Javascript is enabled for purposes of website accessibility
Log In Help Join The Motley Fool
Free Article Join Over 1 Million Premium Members And Get More In-Depth Stock Guidance and Research
By Rich Smith – Mar 14, 2018 at 9:19AM

Saudi Arabia's frigates and corvettes are aging and in need of replacement.

Currently floating a navy comprising just 11 capital warships (four corvettes and seven frigates, most 30 years old or older), the Kingdom of Saudi Arabia has been on the hunt for new warships from Lockheed Martin (LMT -1.31%) for nearly a decade. Last week, it got its wish.

In the Department of Defense's first contracts digest of the week, the Pentagon described awards totaling $2.63 billion. Topping that list was a $481.1 million award funding "long-lead-time material" that Lockheed will need to begin construction of four Multi-Mission Surface Combatant (MMSC) ships. 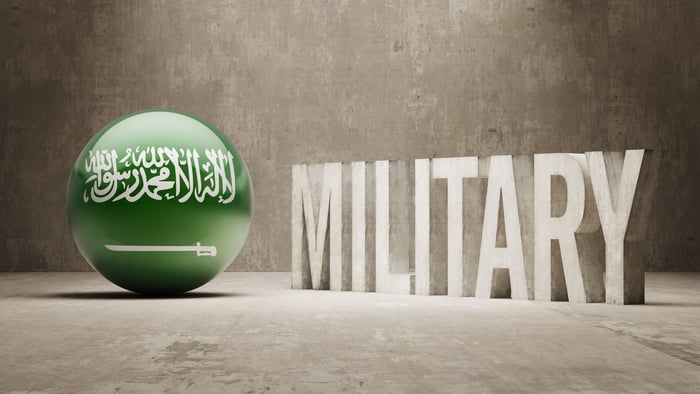 This contract award shouldn't come as a huge surprise. As recently as November, Lockheed Martin updated investors on the progress of negotiations with Saudi Arabia to win the warship deal. In its post-Q3 earnings conference call, Lockheed Martin CFO Bruce Tanner noted that the company was already "starting to do some design work and so forth" on potential variants of the Freedom-class Littoral Combat Ship (that Lockheed builds in cooperation with Fincantieri Marinette Marine for the U.S. Navy) that might interest the Saudis.

Now it appears Lockheed has hit upon a design that Saudi Arabia likes.

Each warship stretches nearly 390 feet in length, with weapons bristling all along its length: a MK-75 76mm cannon, ten 50-caliber machine guns, two eight-cell MK 41 Vertical Launch Systems, and two Harpoon missile launchers for offense. MSSM will also be equipped with Raytheon RIM-162 Evolved Sea Sparrow Missiles and a Raytheon SeaRAM Close-in Weapon System for air and missile defense. MSSM even has room on deck for an MH-60R Seahawk helicopter -- also sold by Lockheed Martin, and of which Saudi Arabia already owns several -- for anti-submarine warfare.

What's it worth to Lockheed

Lockheed Martin's $481.1 million award to begin building four MMSC warships for Saudi Arabia was the largest contract awarded last Monday. But big as it is, this award is barely a down payment on the ultimate cost of these warships.

According to the U.S. Government Accountability Office, Lockheed sells Littoral Combat Ships to the U.S. Navy for roughly $666 million apiece. However, once you include the vast array of missiles and other equipment needed to arm these warships -- more than 700 Harpoons, RIM-162 Evolved Sea Sparrow Missiles, and RIM 116C Block II Rolling Airframe Missiles across the four hulls Saudi Arabia is buying -- Janes reports that Saudi Arabia will pay more than $11.2 billion for its four MMSCs.

And even that's not the end of the opportunities for Lockheed Martin. In comments on an unrelated matter, Lockheed partner Fincantieri Marinette Marine mentioned that Saudi Arabia has taken out an option to buy a further four MMSC warships -- potentially doubling the value of this contract to as much as $22.5 billion. That's more money than Lockheed's entire Rotary and Mission Systems division -- which, according to S&P Global Market Intelligence, builds the LCS and MMSC -- ordinarily makes in a year.

Pentagon-watchers will be aware that Lockheed Martin is currently engaged in a high-stakes contest to win a contract from the U.S. Navy to build as many as 20 new frigate-class warships for the U.S. Navy. Lockheed is offering its Freedom-class LCS as one design on which a frigate could be based, and Saudi Arabia's order of a Freedom-derived MMSC is a strong vote of confidence in the design from a foreign buyer.

Just because Saudi Arabia likes the Freedom-class, though, doesn't necessarily mean the Pentagon will, too. And with the Pentagon program more than twice the size of Saudi Arabia's buy, that's still the real prize Lockheed Martin is aiming for -- and it's a prize that remains yet to be claimed.