Ford is raising the automated-safety bar with a new suite of standard high-tech safety features.

Ford Motor Company ( F -3.67% ) is upping its safety game. The Blue Oval said that over the next few years, it will make a suite of advanced driver-assist systems standard on nearly all of the vehicles it offers in North America.

Ford's plan is a direct response to mass-market archrivals Toyota ( TM -0.38% ), Honda ( HMC -0.67% ), and General Motors' ( GM -2.15% ) Chevrolet brand, all of which are already making some of these systems standard on their own vehicles. But Ford says that its system, which it's calling Co-Pilot360, goes a few steps beyond the offerings from its rivals. 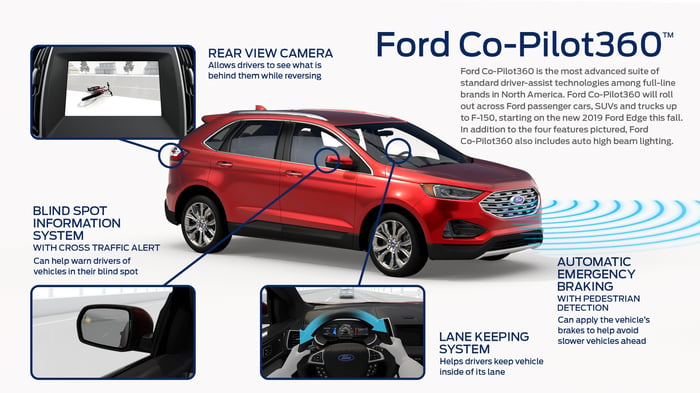 Ford's Co-Pilot360 safety suite will be standard on nearly all Ford and Lincoln vehicles in North America by 2020. Image source: Ford Motor Company.

Here's what Ford will include in the new Co-Pilot360 driver-assist suite:

Ford will roll out the Co-Pilot360 system across most of its product portfolio as vehicles are updated. It will debut on the refreshed 2019 Edge SUV this fall, and will be standard on 91% of Ford vehicles by 2020, the company said.

How the system compares with rivals' offerings

Ford released a little chart comparing Co-Pilot360 with the standard features offered by its three rivals. All three already offer reverse cameras (as does Ford), but the packages differ from there.

The takeaway: It's not groundbreaking, but it's important

To be fair, Co-Pilot360 doesn't exactly break a lot of new technical ground. Really, it just repackages a bunch of existing technology. But it's still something of a big deal.

By making these features standard on most of its vehicles, Ford will make more of its vehicles safer -- and raise the competitive bar for rivals. The system will also help Ford's customers get more comfortable with the idea of vehicles that drive themselves. While Ford plans to introduce self-driving technology to its commercial vehicles first, it does expect to roll it out to its retail customers in time.

Most importantly, making these systems standard now is a clear win for consumers. It's also a selling point that could give Ford's sales a nudge upward as the Co-Pilot360 suite rolls out across the Ford lineup.