Last week, an "initiation" at "overweight" by investment bank Morgan Stanley lifted shares of II-VI (NASDAQ:IIVI) more than 8% in a single trading day, and helped propel shares of the laser maker into a weeklong winning streak.

One analyst thinks II-VI stock has further to climb. Here's what you need to know.

Phase 1 of our mission is complete. Commence phase 2!

When Morgan Stanley published its buy note on II-VI last week, the analyst predicted the stock might hit $46 per share within 12 months' time. In fact, it only took six days.

Early this morning, II-VI passed the mark that Morgan Stanley had set for it. But while you might expect this would be a catalyst for Wall Street analysts to begin shutting down their recommendations, seeing as II-VI has already gone up as much as it's "supposed" to, the opposite is happening instead. 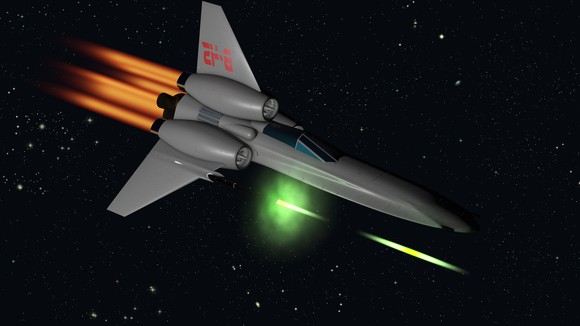 Last night after close of trading in New York, analysts at a second bank -- DA Davidson -- followed in Morgan Stanley's footsteps and initiated their own coverage of II-VI. But instead of Morgan's $46 price target, they assigned stock in the laser maker a new and improved price target of $55 a share -- implying II-VI stock could go up another 20%!

Why does Davidson think II-VI stock will enjoy continued momentum? According to data collected by S&P Global Market Intelligence, most analysts on Wall Street are expecting to see II-VI grow its sales at about 13.6% annually on average over the next five years. Davidson appears to broadly agree with this assessment, citing II-VI's role as a "broad based supplier" of "advanced materials, lasers, and optics serving the industrial, communications, and military end markets," according to a write-up on TheFly.com today.

With so many "irons in red hot fires," writes Davidson, II-VI has many paths to profit from the growing importance of lasers in everything from fiber optic communication to semiconductor manufacturing to ray guns.

Perhaps very substantial profits. In its note last week, Morgan Stanley made the case that, through "volume and yield improvement," II-VI should expand its profit margin such that it could potentially grow its profits at a rate 50% to 100% faster than it grows its sales. (So at the high end, profits could potentially grow as fast as 27.2% annualized over the next five years.)

While not repeating these exact numbers, DA Davidson does predict that the company will exhibit "meaningful earnings growth" that should translate into "stock price appreciation."

How much appreciation, precisely?

Of course, when you consider how much II-VI stock has already gone up over the past week, as its price surged from $38.50 (before Morgan Stanley's recommendation) to nearly $47 earlier today, even investors who like II-VI have to ask themselves: How much higher can this stock go?

Well, let's take a look and see if we can figure that out.

At its current stock price (now just shy of $46 as I write this, around 10:00 a.m. EDT Thursday), II-VI sells for an apparently pricey 35 times trailing earnings. Free cash flow at the company, moreover, is currently negative -- and has remained so for the past 18 months.

Valuing the stock on its GAAP earnings therefore (since there is not FCF on which to value it), you'd ordinarily want to see II-VI stock growing earnings at 35% or better in order to get II-VI stock down below the 1 PEG ratio that value investors use as their touchstone. However, even assuming Morgan Stanley was right last week about II-VI being able to grow earnings at twice its rate of sales growth, that means earnings growth for the company will max out at about 27%.

Worse, remember that Morgan Stanley also suggested that earnings growth could be as little as 150% of sales growth (i.e., 20%) -- and most analysts cited by S&P Global are actually looking for earnings growth closer to 13.5% over the next five years. Thus, in the best-case scenario of a 27% earnings growth rate over the next five years, I believe II-VI stock is currently overpriced at 35 times earnings. At the more conservative projected growth rates of 20% and 13.5%, the stock would accordingly be even more overpriced.

All of which leads me to the conclusion: DA Davidson is jumping aboard the II-VI train at the very worst possible moment. Even if this stock was cheap and priced to buy last week, it no longer is. After running up 20% in less a week, II-VI has become simply too expensive to buy.