Shares of Blue Apron Holding Inc (NYSE:APRN) were climbing today after the meal-kit provider said it would begin selling its meals in grocery stores later this year, a departure from its subscription delivery model. The move was a tacit admission that the company's traditional strategy was no longer enough to remain competitive in the increasingly crowded meal-kit market. 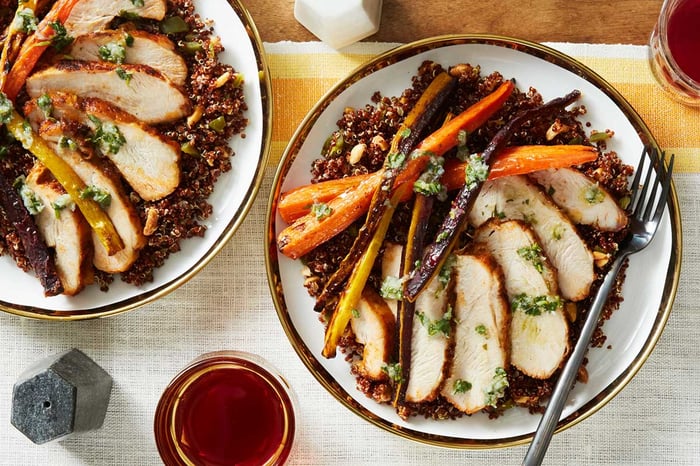 While the decision may appear to be coming out of desperation, as the stock has lost nearly 80% since its IPO last June and the company posted a decline in customers and revenue in its most recent quarter, it's the right call for Blue Apron. New CEO Brad Dickerson told The Wall Street Journal, "The access to consumers is much broader in this avenue than the avenue we've been operating in in the past."

Selling in grocery stores would likely mean a lower per-meal margin, as it would make the company a wholesaler instead of a direct seller, but it would help it save on shipping costs. It's unclear if its prices in stores would be any different. The move should help drive sales growth and brand awareness, however, as the vast majority of grocery sales still take place in stores, and Blue Apron's subscription model does not allow for impulse purchases (like if a customer just wants a meal for that night).

The next question is what retailers Blue Apron will partner with, as management declined to name any. Target may be an ideal partner. The big-box chain wants to juice its grocery sales, has a national footprint and urban locations, can offer same-day delivery with Shipt, and has a brand that would seem to align with Blue Apron.

For investors, the bad news is that the company's decision to sell through stores likely means that Blue Apron's performance has continued to suffer in the first quarter.