They could be a key part to growing its online sales in 2018.

Walmart (WMT -0.53%) has high expectations for its e-commerce business in 2018. The company maintained its guidance for 40% online sales growth for the full year, even when fourth-quarter results came in well below that benchmark. Management is particularly confident that its investments in online grocery ordering will spur the growth of its online sales.

One such investment is in meal kits -- semi-prepared packages of food with everything needed to make a recipe at home. Blue Apron (APRN -4.93%) was the pioneering force in delivering meal kits in the United States, but it's recently been surpassed by German competitor HelloFresh. Both appear to be in trouble as Walmart enters the market, planning to provide meal kits for online ordering and pickup at over 2,000 of its stores across the country by the end of 2018. 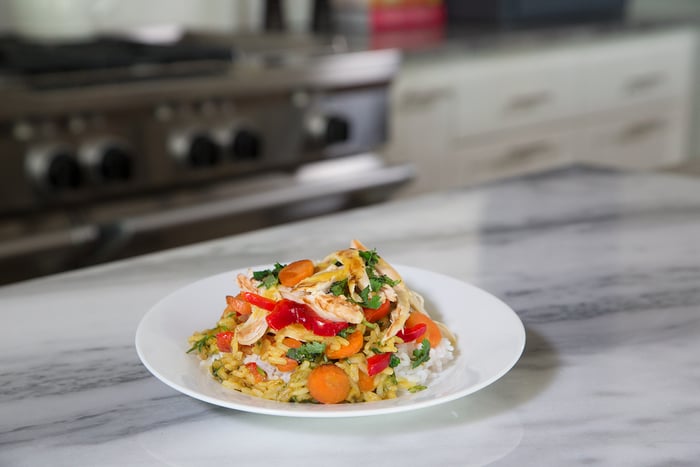 Walmart operates over 3,500 Supercenters in the U.S., and most of them have some prepared foods for sale, which means they're already set up to prepare and package meal kits.

Which means that Walmart can bring a meal-kit product to market and scale it extremely quickly. It's testing the meal kits with just 250 stores, but plans to expand the program to every online grocery pickup location by the end of the year.

Blue Apron, by comparison, has faced several challenges scaling its operations -- most notably its transition to a bigger, more automated fulfillment center in Linden, N.J. The transition resulted in a lot of inaccurate orders sent out to people's doorsteps, which led to a lot of customer cancellations. Blue Apron recently had to pull back on marketing spend and subscriber growth as it sorted through its operational challenges.

The fact that Walmart is already the nation's largest grocer gives it the ability to keep food costs low by exercising its tremendous buying power, as it does on pretty much everything it sells. With customers already coming to Walmart and Walmart.com for groceries, it also doesn't have to spend much to reach its audience. And with all of its locations across the country, Walmart doesn't plan to spend any money on home delivery, opting to have customers come to a store to pick up orders.

It can then pass those savings onto customers -- Walmart has priced the meal kits between $8 and $15 for two servings. Meanwhile, Blue Apron costs about $11 per serving.

Walmart also doesn't require a subscription or significant commitment, as Blue Apron does. Blue Apron sends a minimum of three meals per week, even though some customers might just want to try one. Not only must customers make a monetary commitment, but they must also allocate time to cooking those meals.

As the meal-kit idea catches on, more traditional grocers are jumping on board. Albertsons bought Plated, and Amazon.com (AMZN -1.30%) has been experimenting with meal kits as well. With Amazon adding free two-hour delivery from Whole Foods for Prime members in some markets, it could potentially offer a much more flexible Blue Apron-type service.

The cost overlap between brick-and-mortar groceries and meal-kit delivery services makes the former's adoption of the latter much more economical both for the sellers and the customers. Blue Apron and HelloFresh have to stand up fulfillment centers, while Walmart, Albertsons, and Amazon can just start assembling meal kits in stores. That may mean standalone meal-kit companies aren't long for this world.

Many Blue Apron investors have pinned their hopes on a buyout of the company, with Walmart being the most logical acquirer. But Walmart's move to handle meal-kit creation in-house is a good sign that won't happen.

Walmart will certainly face tough competition from other grocery chains in the meal-kit space, and don't expect Blue Apron and HelloFresh to simply lie down. Amazon is always willing to compete on price, and its willingness to deliver meal kits (and other groceries) to its 90 million-plus Prime households in the U.S. makes it that much more appealing to online customers.

Even with several rivals in the market, Walmart's new meal kits are a significant part of its big bet for the growth of online grocery ordering this year.