It's hard to find two bigger brand names than Coke and Marlboro, and Coca-Cola (NYSE:KO) and Philip Morris International (NYSE:PM) have both worked hard to make their products well-known across the globe. Unfortunately, both companies have increasingly had to deal with similar negative comments regarding the health concerns that many have about their respective products. 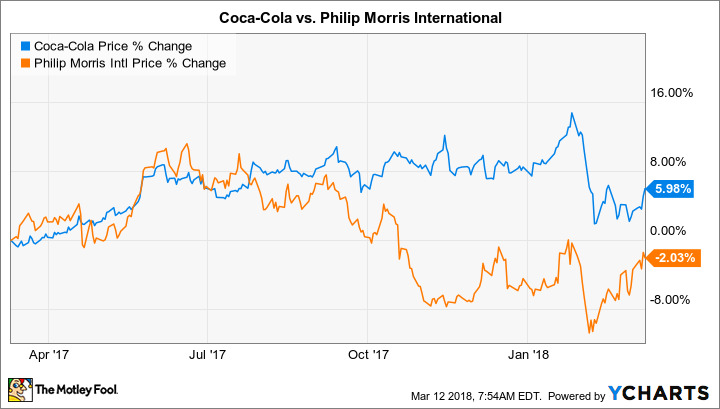 Valuation metrics using simple earnings measures get a bit complicated because of the recent changes that Coca-Cola has made to its business model. The beverage giant's triple-digit trailing price-to-earnings ratio looks ridiculously high compared to Philip Morris' earnings multiple of about 27. When you look at near-term future earnings estimates, however, the two stocks come closer into focus. Coca-Cola currently has a forward multiple of about 20, compared to 18.5 for Philip Morris. That gives the tobacco company a slight edge, which makes sense given its recent underperforming stock price.

Both Coca-Cola and Philip Morris have been good to dividend investors, but the Marlboro maker has a slightly more attractive payout right now. Its yield is close to 4%, compared to about 3.5% for Coca-Cola.

Yet if you like dividend growth, Coca-Cola has a longer history of doing right by shareholders. The cola maker just announced a dividend increase of 5%, stretching its tenure as a Dividend Aristocrat with its 56th consecutive annual boost to its quarterly payout. Philip Morris hasn't been around nearly that long as an independent entity, but when you incorporate the dividend behavior of its former corporate parent, the global tobacco king has done a similarly good job of growing its payout over time. For dividend investors, the two consumer products giants come out neck and neck.

The big question for both Coca-Cola and Philip Morris is how to keep themselves growing even as their main products face continued scrutiny about their potential health impacts. Coca-Cola has decided to restructure its business to focus on its core product development capabilities, choosing to rid itself of its high-capital bottling operations. The company hopes to boost its internal returns by becoming more streamlined from an asset standpoint, but that will only make it more important for Coca-Cola to be smart about developing new beverages that are more in line with what consumers want right now. Recent moves toward zero-sugar carbonated beverages are a start, but what the beverage company really needs is a way to transform its brand more fully toward something that will resonate with customers just like Coke did a century ago.

Philip Morris is making an even bigger transformation, having stated that its long-term strategy involves completely eliminating traditional cigarettes from its product lineup. Instead, Philip Morris believes that reduced-risk product alternatives are the future of the industry, and it has made a huge bet on its iQOS heated tobacco system. The company has run into some resistance from regulatory agencies that aren't convinced about how much less harmful iQOS and similar products might be compared to traditional cigarettes, but Philip Morris is working hard to develop the scientific evidence that skeptics will want in order to allow the reduced-risk items to become fully available. Early results in Japan are extremely promising, and although near-term disruptions could be painful as the company makes the transition, Philip Morris has a clear vision of what it wants to become.

At this point, Philip Morris looks like the better buy between these two stocks. With a higher yield, lower valuation, and arguably clearer growth trajectory ahead, the tobacco giant is ahead of where Coca-Cola is right now.