Fitbit (NYSE:FIT) has been a rough investment since it peaked three summers ago, but at least one Wall Street pro sees better days ahead for the company. Craig-Hallum analyst Alex Fuhrman initiated coverage of the wearable fitness-tracking leader with a buy rating on Monday.

Fuhrman feels that Fitbit's shift in strategy, its new emphasis on digital health, and its recent product rollouts could pay off over time. Moreover, his coverage is turning heads because of his seemingly aggressive $10 price target, nearly twice where the stock trades now. His peers are all perched on single-digit price goals, with $6.22 as the consensus mean. 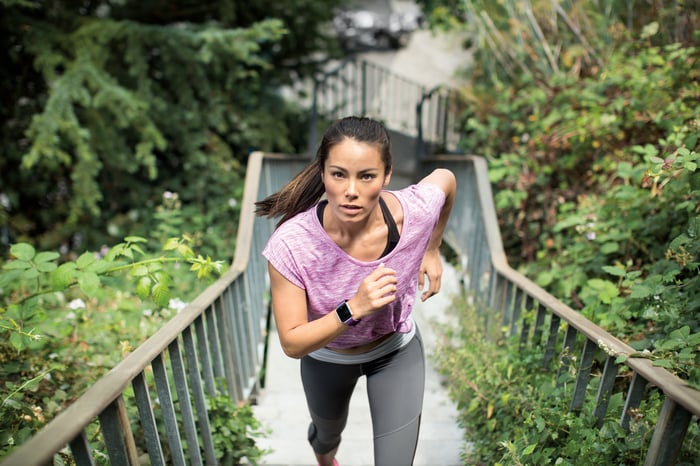 Fuhrman's $10 price target may not seem realistic. It represents 90% of upside from current levels, and you'd have to go all the way back to late 2016 to find a day when Fitbit was trading in the double digits.

A lot has happened since the last time that Fitbit stock was north of $10, but it can be all summed up by its ongoing five-quarter streak of declining revenue. Last month's report was the latest dud, and while revenue from its Q4 only took a 0.5% year-over-year hit, those results were being stacked up against the soft financials from the holiday-containing quarter of 2016, when the top line took a nearly 20% tumble. Analysts had been holding out for a modest increase. Fitbit has a long way to go to get to where it was two years ago.

The uninspiring fourth quarter was more problematic because that was the period in which Fitbit introduced the Ionic, its first true smartwatch. The $299 device helped prop up average selling prices, but the company sold far fewer devices overall. New products tend to drive results, and this time around we saw Ionic -- as well as the Alta HR, Fitbit Aria 2, and Fitbit Flyer -- fail to gain serious market attention during the seasonally potent quarter.

There were some glimmers of growth overseas, but trend watchers aren't going to be happy with Fitbit's 13% revenue slide in its home market. A better silver lining is that its active user base expanded by 9% to hit 25.4 million by the end of last year.

Fuhrman obviously isn't looking back: His upbeat outlook is based on where Fitbit can go from here. New products including a cheaper smartwatch can help, and as long as Fitbit's active user base is growing -- at least on a year-over-year basis -- it's hard to write the company off.

For now, Fitbit will have to prove itself. As a shareholder and someone who believed in the wearables company as an investment at much higher levels than it's trading at now, Fuhrman isn't the first analyst whom I've seen come out with a bullish turnaround prognosis -- and those prior optimists only wound up burned several months later. The growth comparisons get easier from here for Fitbit, but his target doesn't leave a lot of room for error if its strategy to bounce back hits another rough patch.