After the expensive Ionic smartwatch fell short of expectations, the company is betting on an inexpensive smartwatch for the masses.

Fitbit's (FIT) first foray into the full-featured smartwatch market didn't go so well. The Fitbit Ionic, priced at $299 and launched in October, failed to save the company's holiday season. What's worse, the company's lackluster guidance suggests that it doesn't think Ionic sales will pick up in 2018. Fitbit expects total revenue to tumble by as much as 20% year over year in the first quarter, with a smaller decline for the full year.

The Ionic's price tag, which puts it in direct competition with the Apple Watch, was a problem. For its second attempt at cracking the smartwatch market, Fitbit is targeting a more affordable price point. The Fitbit Versa, available in April and priced at $200, has a much better chance at success. 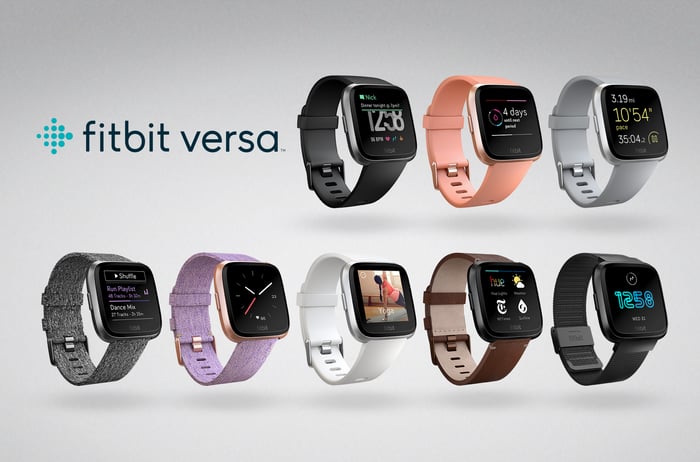 Fitbit built its business on relatively inexpensive fitness trackers. Its current lineup is bookended by the $60 Flex 2 at the low end and the $150 Charge 2 at the high end. Smartwatches are growing more popular, but they won't go truly mainstream until prices come down. Fitbit's Versa is an attempt to do just that.

The Versa is smaller and lighter than the Ionic. Fitbit claims it's the lightest metal smartwatch on the U.S. market. It will be powered by Fitbit OS 2.0, the second iteration of the operating system the company built for the Ionic. Fitbit's choice to go it alone instead of adopting Android Wear meant that few apps were available when the Ionic launched; that's likely one reason why the Ionic wasn't more popular.

Fitbit will face the same problem with the Versa, and it will need the Versa to be successful to compel developers to build apps for Fitbit OS. With the Versa priced just $50 above the Charge 2, customers may be more willing to buy it compared to the more expensive Ionic, even with a narrow selection of apps. Fitbit faces a chicken-or-the-egg problem here, so it needs to make the Versa compelling enough to offset its shortcomings.

The Versa boasts four-plus days of battery life, although we'll have to wait for independent reviews to see whether it lives up to that claim. Unlike the Ionic, the Versa only features connected GPS, which means it uses the GPS hardware of a connected smartphone. That's not surprising given the price point.

Versa could be a success

One thing Fitbit has going for it: a base of tens of millions of Fitbit users. The Ionic was too expensive to trigger a meaningful number of upgrades from users with less-expensive fitness trackers. The Versa, which has far more features than any of Fitbit's fitness trackers, may be priced just right to convince users to upgrade.

Fitbit has had trouble for a while providing users with a compelling reason to upgrade. Its Charge 2 fitness tracker, for example, was better than the original Charge, but it didn't really introduce any meaningful new features; someone with a Charge had little reason to shell out another $150 for a Charge 2. The Versa represents a big enough jump in functionality that it may break that cycle.

Fitbit will face plenty of competition in the affordable-smartwatch market, and that could throw a wrench in its plans. Fossil (FOSL -5.05%) has been ramping up its smartwatch offerings over the past year; its $199 Misfit Vapor will directly compete with the Versa. Fossil nearly doubled its wearables revenue in 2017 to $300 million -- enough that Fitbit should certainly be concerned.

Given Fitbit's guidance, it's unlikely the company will return to growth this year. Even if the Versa is a hit, slumping sales of fitness trackers will drag down the company's results. But the Versa could mark the start of a successful expansion into affordable smartwatches, laying the groundwork for a return to growth in 2019 and beyond.