Please ensure Javascript is enabled for purposes of website accessibility
Log In Help Join The Motley Fool
Free Article Join Over 1 Million Premium Members And Get More In-Depth Stock Guidance and Research
By Rick Munarriz - Sep 1, 2020 at 10:55AM

The wearables pioneer could get left at the altar, but things might not end badly even if Alphabet isn't able to go through with its $2.1 billion deal for Fitbit.

This isn't the way most acquisitions work out. Alphabet's (GOOG 2.68%) (GOOGL 2.63%) Google should've closed on its $2.1 billion deal to purchase wearables pioneer Fitbit (FIT) by now. It's supposed to close in 2020, but Tuesday marks exactly 10 months since the deal was announced. There are some serious doubts that this union will take place. Fitbit's stock price tells you everything you need to know.

It's an all-cash deal, and investors know the drill. The stock of the company being acquired may initially surge to near the buyout offer -- with thin hopes of a bidding war -- but eventually settles comfortably below the takeout price. The shares then inch higher until the deal is complete, but that's not happening here. 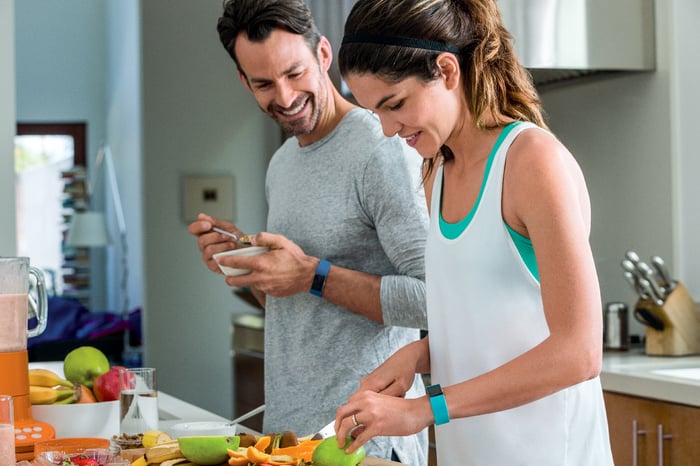 Alphabet's buyout translates into $7.35 in cash per share for Fitbit shareholders. The stock did trade as high as $7.26 the day the deal was announced before settling in below the $7 mark a few trading days later. These days the stock keeps sinking. Monday's close of $6.36 implies a 13.5% return.

Arbitrage specialists would be pounding on Fitbit shares if the deal had a strong chance of closing in the coming months. Even if investors had to wait another year for the nuptials, a 13.5% gain isn't a bad haul. We know that Alphabet is good for the money.

However, Fitbit stock has cratered -- and this deal hasn't closed -- because regulatory agencies have their concerns. Fitbit wearables track a lot of sensitive health information, and Alphabet is a tech giant that knows how to monetize its growing body of knowledge. It's not just the U.S. Department of Justice and the Federal Trade Commission that have been looking the potential pairing over. Earlier this month the European Commission opened an investigation under its merger regulation body.

It's silly when you think about it. Apple (AAPL 2.62%) is the runway leader in wearables, and the high-end Apple Watch keeps getting a better read of fitness and health monitoring with every update. There's now even an electrocardiogram (ECG) app to go along with the devices. Amazon.com (AMZN 3.53%) quietly launched Halo -- a health, fitness, and sleep tracking wristband -- last week. Alphabet's fellow FAANG stocks are invading the Fitbit sandbox before Google itself gets to play.

Google will be fine without Fitbit. It's Google, after all. The real question here is how Fitbit will fare. Life wasn't dreamy for Fitbit before Alphabet arrived on bended knee last November. Business has been eroding as smartwatches and smartphones improve their ability to do a lot of what a Fitbit wristband can accomplish. Fitbit's entry into smartwatches was initially well received, but this is a competitive market that spits out anyone not named Apple.

Revenue will decline for the fourth year in a row for Fitbit. You would think a pandemic would inspire people to take charge in improving their daily fitness routines, but Fitbit's brand has diminished as folks hold out until they see what Google will do with the product lines.

There is some good news here. For starters, Fitbit obviously isn't a $2.1 billion stock right now. Its market cap is just above $1.7 billion. With its cash-rich and debt-light balance sheet, the enterprise value is $1.35 billion, and the math gets even better.

If the deal falls apart on antitrust concerns, or Alphabet just walks out, it will owe Fitbit a $250 million termination fee. Back that out from Fitbit's enterprise value and you have a $1.1 billion company. This is a little more than half what Alphabet was willing to pay for Fitbit.

The bad news here if regulators block the deal is that it's not as if another tech giant can swoop down the aisle and slice into the fresh wedding cake. If antitrust bodies in Europe or the U.S. don't like Alphabet buying Fitbit, it's not as if they'll sign off on Apple or Amazon doing the same. However, there are other potential buyers. More importantly, Fitbit is going to have a ton of dough on its hands. It will have time to orchestrate a turnaround or buy the pieces it needs to make things happen. Fitbit stock may naturally take a hit if and when Alphabet has no choice but to walk away, but don't assume that Fitbit won't bounce back and eventually emerge better than it was before.