Rumors broke on Monday that Alphabet (GOOG -1.48%) (GOOGL -1.38%) subsidiary Google had formally made an offer to acquire Fitbit (FIT), following reports from last month that the wearable tech company was looking to sell itself amid its ongoing efforts to compete with Apple in the smartwatch and wearables market. It was unclear at the time exactly how much the search giant had offered, but investors now know, as the companies have officially announced the deal.

Google is scooping up Fitbit for $2.1 billion. Here's what investors need to know. 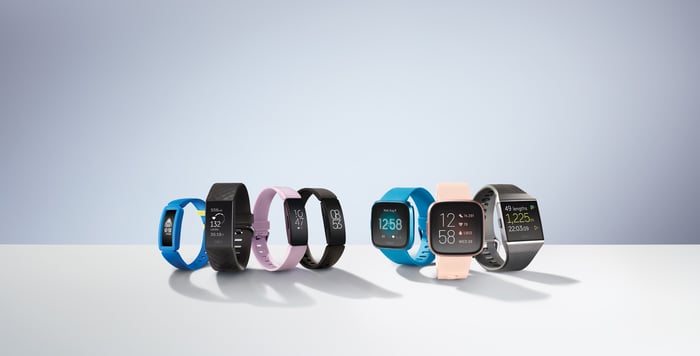 A 71% premium compared to before the rumors broke

Google has agreed to acquire Fitbit for $7.35 per share in cash, which at first glance represents a modest 19% premium over yesterday's close. But Fitbit shares had soared earlier this week due to the acquisition speculation; the price tag is actually a whopping 71% premium compared to last Friday's close, when Fitbit's market cap was just over $1.1 billion. The deal values Fitbit at $2.1 billion on a fully diluted equity value basis.

Fitbit reassures customers and investors that it will continue to maintain strong privacy protections around the data it collects, which is highly sensitive in nature since it pertains to people's health. The company says it never sells personal information and the data that it has will not be used for Google ad targeting.

We have built a trusted brand that supports more than 28 million active users around the globe who rely on our products to live a healthier, more active life. Google is an ideal partner to advance our mission. With Google's resources and global platform, Fitbit will be able to accelerate innovation in the wearables category, scale faster, and make health even more accessible to everyone. I could not be more excited for what lies ahead.

What happens with Wear OS?

Google's smartwatch platform, Wear OS, has been in dire shape for a long time. Instead of killing off the operating system outright, Osterloh says that Google will work with Fitbit to "combine the best of our respective smartwatch and fitness tracker platforms." The company is framing the acquisition as a way to "invest even more in Wear OS."

"This agreement underscores our belief in how important wearable tech has become, and it's also an exciting opportunity for Wear OS," Wear OS exec Sameer Samat wrote in a separate blog post. "We're looking forward to collaborating with Fitbit to bring the best of our smartwatch platforms and health applications together, and enabling our partners to build the next generation of wearables."

That last reference to "partners" is particularly important, as many third-party manufacturers have been distancing themselves from Wear OS in recent years in favor of proprietary platforms. Fitbit has always been an integrated player, making both the hardware and software for its devices. Samat's comments suggest that once Google merges Wear OS and Fitbit OS, it will license the amalgamation to partners.

That's not surprising, given Google's approach to other markets, but there are still plenty of lingering questions about how Google will execute on combining the platforms. The news comes after Google acquired $40 million of smartwatch tech from Wear OS partner Fossil earlier this year.