Markets move in mysterious ways. Having soared through 2017, stocks in the trucking sector have fallen off a cliff since the start of February. It's strange, because the declines come at precisely the point when orders have soared, and the industry is forecasting strong growth. Meanwhile, the leading companies have been upgrading guidance for their earnings and for the industry. What's going on, and is this a great buying opportunity in the sector? 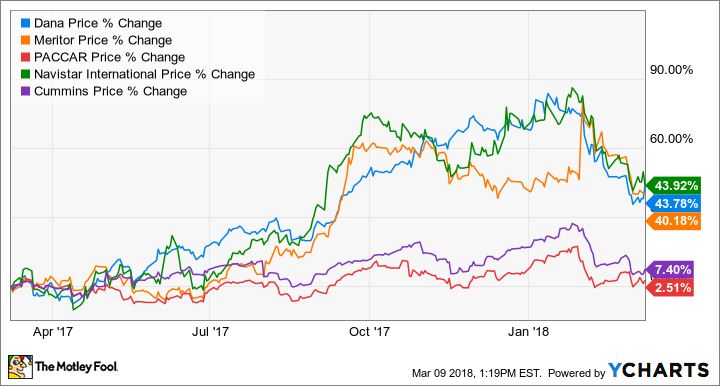 What companies have been saying

Trucking companies all reported strong quarters in their latest earnings reports, and as you can see below, Navistar, PACCAR and Meritor raised their outlook on North America heavy-duty truck production/sales in 2018. Similarly, Navistar, Meritor and Dana raised their revenue guidance for 2018. From a bottom-up perspective, the trucking industry is set for a strong year, particularly in North America -- the last column shows how companies have raised guidance for the largest class of heavy truck, namely Class 8.

What industry groups are saying

The positive outlook is confirmed when looking at what leading commentators are saying about the market. For example, North American heavy-duty Class 8 orders were up 76% on a year-over-year basis, and there is a "capacity crisis" with freight companies "scrambling to add trucks as fast as they can," according to Freight Transportation Research Associates. 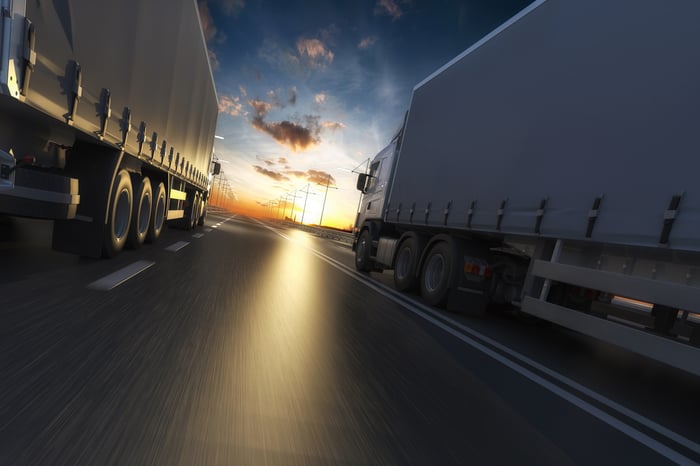 Moreover, the American Trucking Association Truck Tonnage Index (an index based on surveys of its membership) has risen strongly, leading its Chief Economist Bob Costello to say, "I expect freight tonnage to remain robust in the months ahead."

There's little doubt that from a top-down perspective, too, the trucking market is looking strong in 2018.

With all this good news, why has the market sold off the sector so aggressively? One answer is that the good news from the start of 2018 is actually a pull-forward of demand from 2019 and that this year will mark a peak in truck demand. That's not good news for truck manufacturers like PACCAR (Kenworth and Peterbilt) and Navistar (International Trucks), engine manufacturer Cummins or component manufacturers like Dana and Meritor.

As you can see in the chart below, when heavy-truck sales last peaked, in the summer of 2015, the stocks in the sector had a very difficult year. 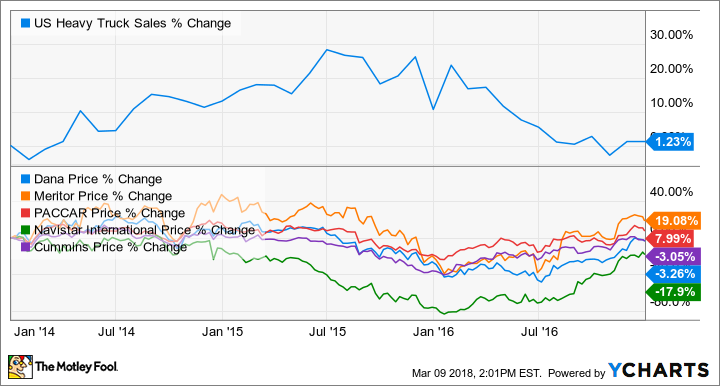 Executives of leading companies in the industry were asked about the potential for a peak in demand in 2018 on their recent earnings calls, and the responses gave little confidence that this year won't see a peak.

For example, Cummins COO Rich Freeland said it was "too early to call" 2019 yet, but suggested the underlying principles were "pretty good." PACCAR CEO Ronald Armstrong said he wasn't "concerned about the peak,"  while Navistar CEO Troy Clarke merely said, "We think 2019 will be another strong year" when questioned on the matter.

What to do with trucking stocks

Frankly, I think the market is overreacting on the issue of peak demand for two reasons.

First, there's no guarantee that 2018 will see the peak, and even if it does, there's no reason why truck sales will decline the way they did in the last trough. As you can see below, U.S. industrial production -- a key driver of truck demand -- actually fell in 2016 even as the overall economy held up.

Second, although the U.S. is the home market for all these stocks, the U.S. isn't the key determinant of global trucking demand. To put this into context, the Asia/Pacific region (including China and India) produced double the amount of trucks than North America and Europe combined in 2017. Meanwhile, Europe's light truck market is currently double that of North America and its medium/heavy heavy market is comparable. Dana, Meritor, PACCAR and Cummins generate more than 40% of their sales internationally. Navistar is heavily dependent on North America.

All told, there's no reason why the trucking industry can't have another strong year in 2019, and the recent dip in trucking-stock prices is providing a useful entry point.