Slack boasts AirBnB and Oracle as clients. And Amazon and Microsoft were rumored to be sniffing out a takeover of the platform last year. Just how much is this hot messaging app worth?

Slack has become the go-to messaging app for start-ups and legacy businesses that want their teams to be able to communicate in a convenient way throughout the workday.

The company claims that it's the fastest growing business application ever. Founded in 2014, Slack already has 9 million weekly active users. Built to bring teams together and to cut down on emails, Slack also boasts 50,000 paying companies, including 43 companies from the Fortune 100 list.

Companies from AirBnB to Buzzfeed to Oracle are using Slack to help facilitate team and inter-team communication. Last year, there were rumors that the app garnered takeover interest from both Amazon and Microsoft (MSFT -1.39%), but neither deal materialized.

So, just how much is this hot messaging app worth five years after its launch? 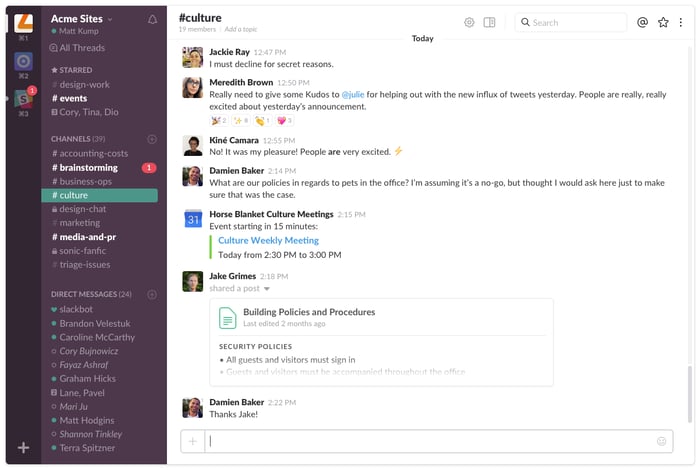 Slack has been lauded for its ease of use and for making tedious back-and-forth communication on team projects more fun. Users can easily make group conversations or private conversations, upload files, and use gifs. The platform has the feel of a social media site with its colorful and easy-to-use design.

The look and feel of the platform makes sense considering Slack was first a game developer company called Tiny Speck, known for the nonviolent fantasy game Glitch. When Tiny Speck shut Glitch down in 2012, the creative team decided to launch Slack instead to help solve workplace communication issues. While the switch might seem random at first, the team had basically already built Slack for their own internal communication use during the three years they were running Tiny Speck.

The San Francisco-based company has had ten funding rounds beginning back in early 2009 with a $1.5 million injection from Accel Partners. By the time Tiny Speck shut down at the end of 2012 and the company rebranded as Slack a few months later, the team had already been through four funding rounds. Slack CEO Stewart Butterfield said part of the reason they switched gears was that he didn't think the video-game Glitch would ever end up making enough money to please its investors.

Most recently, Slack raised $250 million in September in its Series G funding round led by SoftBank's Vision Fund, which helps fund emerging technologies. "We believe that Slack is the future of work," Deep Nishar, senior managing partner at the Vision Fund, said in a statement at the time.

The cash injection was for "operational flexibility" rather than anything specific, Butterfield said in a statement at the time. He said the company still hadn't spent most of the $591 million it had raised through its previous funding rounds, according to Bloomberg. He also noted that the company had no plans for an IPO in the near future.

In total, Slack has raised $790 million, according to Crunchbase Data, although two funding round amounts were left as "not announced." After its latest funding round, Slack said its total funds raised had reached a slightly higher $841 million.

Slack also said it had hit more than 6 million daily active users and had reached $200 million in annual recurring revenue.

It's worth noting that when Amazon was said to be considering purchasing Slack, the rumored price tag was $9 billion. And when Microsoft was interested in buying Slack, sources told TechCrunch at the time that the acquisition would have been at an $8 billion valuation.

Who are Slack's competitors?

On Feb. 28, Alphabet's (GOOG -2.27%) (GOOGL -2.46%) Google announced that its Slack competitor called Hangouts Chat was finally ready for a wide release after 12 months of development. Like Slack, Google is marketing it as a way to "bring teams together." The advantage of this service is how smoothly it works with Google's other G Suite apps, such as Drive, Sheets, Docs, and Slides. It also uses artificial intelligence to help with tasks like booking conference rooms or searching for files.

Back in October, Facebook (META -3.84%) announced that its one-year-old Slack competitor called Workplace had reached 30,000 business users, up from about 14,000 six months previously. The biggest users include Delta, Starbucks, and Walmart. However, Facebook didn't specify how many of those businesses were paying customers, and it's still far below Slack's 50,000 business users that are all paying for the service.

Another big-name competitor, Microsoft, launched its version of Slack last March with the simple name Microsoft Teams in Office 365. At the time, Microsoft said the service already had 50,000 organizations signed up, including Accenture and Alaska Airlines. On March 12, the anniversary of Microsoft Teams, the company announced new features for 2018, including integrations with its voice assistant Cortana, as well as inline message translation, and the ability to record, transcribe, and save meetings to the cloud.

A lesser known name based in Australia, Atlassian (TEAM -4.95%), also launched a Slack competitor called Stride in September. Previously, it had released a workplace chat service called Hipchat in 2010 that never took off, even though it predated Slack. The new Stride interface is extremely reminiscent of Slack's interface except Stride has a blue colored theme vs. Slack's purple.

While Slack has been said to have a cult following, these competing products are all coming from much bigger companies, and that's worrisome. Atlassian has a $13.9 billion valuation, Microsoft's valuation is $722.6 billion, Facebook's is $535.1 billion, and Alphabet's is $797.8 billion. That makes Slack's $5.1 billion valuation seem tiny. Noticeably missing from the list is Amazon. But we've seen it make an overnight move and change the ranking in a market overnight, so there's no telling what the space will look like in a year.