Nike (NYSE:NKE) will report its third-quarter earnings on Mar. 22 after the market close. It's been a tough year for Nike with North American revenue, gross margin, and earnings coming in lower than the year before.

In recent quarters, management has been pointing investors to its long-term strategy to reignite revenue and earnings growth, which includes innovating in footwear and investing in digital sales channels. As Nike gets set to launch several product styles over the coming months, investors will want to see that it can still out-innovate the competition. 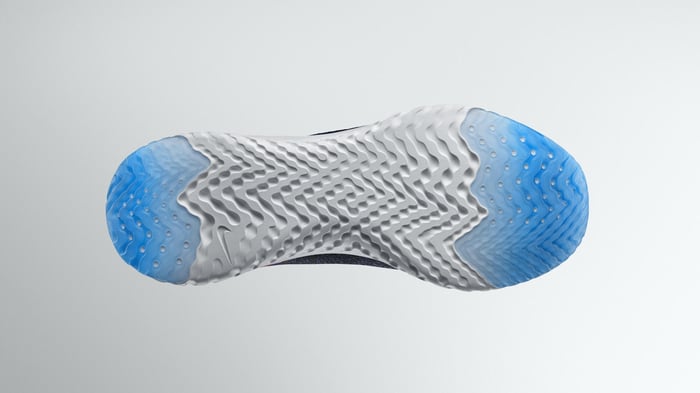 Key numbers are expected to be weak

Management doesn't give specific guidance for revenue or earnings per share, but it expects revenue growth at or slightly below the rate for the second quarter, in which revenue grew 5% on a reported basis and 3% excluding currency changes.

Nike has faced major headwinds resulting from a promotional environment in the U.S. retail industry, as well as competition from Adidas, which has been posting much stronger revenue growth in North America.

These headwinds have put a lot of pressure on Nike's gross margin over the last few years, during which it contracted from 46.2% in fiscal 2016 to 43.3% through the first six months of fiscal 2018 (ending in May).

Management expects gross margin to contract another 125 to 175 basis points for the third quarter, but this is mainly a result of higher costs stemming from the new products Nike is launching -- including the Nike React foam cushioning technology pictured above -- in an attempt to win back market share. Gross margin should improve in the fourth quarter as currency fluctuations are expected to swing back in the company's favor and as investments in new products begin to pay off.

Management said it will "remain disciplined" in controlling operating expense, but it is also continuing to spend in areas that will fuel growth, such as creating greater brand distinction in new product styles and continuing to build out its digital capabilities.

The 3 things to watch

New products were launched at the end of the third quarter, and we won't know what impact these will have on revenue until Nike reports fourth-quarter earnings later this summer. Nonetheless, on the upcoming conference call, investors will want to know how those products are performing, because renewed innovation efforts are critical to Nike's North American turnaround.

Growth in the international sector, which makes up over 50% of total revenue, will also be important in offsetting weak growth at home. In the first six months of fiscal 2018, international growth has been strong with sales in Europe up 9% year over year. And in China, which is estimated to be a $850 billion athletic apparel market by 2025, revenue grew 13%.

On the second-quarter conference call, CFO Andrew Campion said, "We see momentum and a pull market building beneath the surface of our aggregated results." The momentum is in Nike's direct-to-consumer sales, including digital sales and Nike Brand retail stores, which grew 13% year over year in the first half of fiscal 2018. That's compared to flat results in Nike's wholesale business.

Digital sales, which include sales from Nike.com and mobile apps, represent only 7% of total revenue, but they grew 29% year over year in the second quarter. Nike has enjoyed success with its mobile apps, and because these apps haven't yet reached all of the company's markets, management has high expectations for the growth of digital sales going forward.

We already know Nike will likely report weak sales in North America, so it's important for international regions to maintain their stronger trends. Margins will also be weak due to a soft North American retail market and higher costs for new products -- the same goes for bottom line earnings.

However, looking past those headline numbers, investors will most want to hear about digital sales and new product performance. Nike says it's getting ready to launch "more scale and innovation than at any other time" in company history. The next few quarters will be crucial for Nike to reassure investors that the brand still has the strength stay on top of the competition.