Adidas (OTC:ADDYY) has been a thorn in Under Armour's (NYSE:UA) (NYSE:UAA) side over the past several years. The German athletic footwear and apparel maker, once considered an also-ran in the saturated market, staged a remarkable comeback with a five-year turnaround plan it launched in 2015.

That plan called for faster production and rotation of its products, deeper expansions into urban markets, bigger e-commerce investments, and stronger engagement campaigns with customers, retailers, and partners. It also enlisted celebrities like Kanye West to design and promote their own shoes, introduced "retro" looks to stand out from the competition, and launched foam-soled "UltraBoost" running shoes which were both stylish and comfortable. 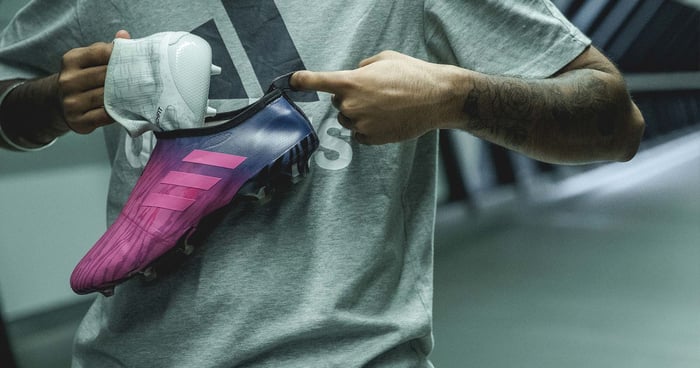 As a result, Adidas rebounded as Under Armour lost its footing. Under Armour, once hailed as the "next Nike," struggled with waning sales of its flagship Curry sneakers, poorly received designs, and the collapse of top retailer Sports Authority, which flooded the market with excess inventory.

Under Armour struggled the most in the North American market, which generated 75% of its revenues last quarter. For 2017, North America revenue was down 5%. Under Armour rarely mentions Adidas by name, but anyone who follows both companies can see a clear correlation between UA's dropping sales in North America and Adidas' growth in the region.

How Adidas is crushing Under Armour in North America

Here's a side-by-side comparison of Adidas' and Under Armour's North American sales growth over the past four quarters.

In other words, UA ceded market share to other companies, most likely Nike (NYSE:NKE) and Adidas, and struggled to keep its sneakers out of the bargain bin after the collapse of Sports Authority.

Nike's and Adidas' focus on direct-to-consumer channels exacerbated the pain as UA struck deals with retailers Kohl's and DSW.

Under Armour didn't crack the top five brands in either category. Instead, male respondents called UA the top "old brand" that they no longer wore. Among upper-income females, Under Armour only received a single vote as a preferred apparel brand.

What Under Armour can learn from Adidas

Under Armour probably won't admit that Adidas is stealing the show in North America, but actions speak louder than words.

Taking a cue from Adidas' partnership with Kanye West, which yielded the popular Yeezy shoes, UA let Dwayne "The Rock" Johnson design and promote his own "Project Rock Delta" shoes. The first batch of the $140 shoes sold out within 24 hours, and seemingly confirmed that UA could still sell premium shoes while selling its excess inventory at discount prices.

UA also launched new foam-soled HOVR shoes last month in a clear bid to compete against Adidas' UltraBoost shoes. Nike recently entered the market as well with its Epic React Flyknit foam-based shoes for basketball players and runners. However, Adidas has a huge head start in this market since it's been selling UltraBoost shoes since 2015.

Like Adidas, Under Armour is ramping up its customer engagement plans with younger shoppers. It currently holds over 400 partnerships with youth, travel, and club organizations, and about 1,000 contracts with high schools. It's also sharpening up its female apparel business to compete more effectively in the athleisure market.

Analysts expect UA's revenue to rise 3% this year as its earnings drop 11% on markdowns. They expect Adidas' revenue and earnings to rise 10% and 20%, respectively, this year.

For now, Under Armour seems focused on growing its overseas business to offset its weakness in North America. That's the right strategy, but its core business won't survive if it fails to stop Adidas' relentless march across the North American market.