About two years ago, Alphabet's Google (NASDAQ:GOOG) announced that it was working on an open server architecture based on International Business Machines' (NYSE:IBM) then-upcoming POWER9 processors. Prior to 2013, IBM's chips were available only as part of an IBM Power system. IBM set out to change that with the OpenPOWER foundation, a consortium of companies working to build an open ecosystem around the POWER architecture. Both IBM and Google are founding members, and Google's commitment to POWER was a significant step forward for the initiative. 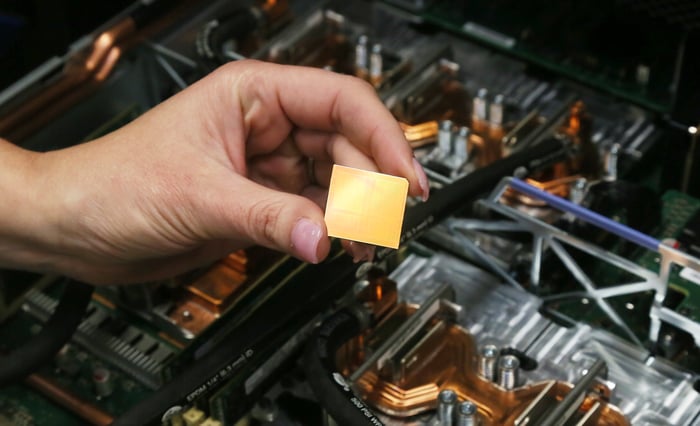 A big step forward for IBM

IBM's goal is to make POWER a significant player in the high-performance computing and hyperscale data center markets, eating away at Intel's (NASDAQ:INTC) dominance. Third parties can now build systems around POWER chips, and even design custom versions. Over 200 foundation members contribute technology to the initiative. That includes tech giants NVIDIA and Micron.

Back in 2015, an IBM executive quantified what IBM hoped to achieve. A 10% to 20% share of both the high-performance computing and hyperscale data center markets would be considered a victory. With Google finally using POWER9 chips for production workloads, IBM now has a foothold in hyperscale data centers.

Mahony also talked about the importance of bandwidth. It doesn't matter how fast a processor is if it can't move data fast enough. IBM claims that one of its POWER9-based systems can transfer data up to 9.5 times faster than an Intel-based system, using OpenCAPI and NVIDIA NVLink technology. That's important for any kind of big data or artificial intelligence (AI) workload.

AI workloads are often accelerated by GPUs or other specialized hardware. Google developed its own accelerator, the Tensor Processing Unit, which it uses in its own data centers for AI tasks. But these accelerators still require a host processor that can move data fast enough. Here's how Mahony explained it:

And so, what that means is you've built this beautiful accelerator. You invested all of this effort, time, and resources to make that an amazing hardware platform. But if the host processor can't keep up with that, as my colleague said: "Did you really have an accelerator? Did you really accelerate the fleet?"

Mahony didn't provide any hard numbers on the scale of the POWER9 rollout in Google's data centers, but she did say that the company has reached the phase where it's ready to scale up the number of applications and the machine count. Google does an awful lot of AI-related computing, so it's not a stretch to assume that this rollout will be a meaningful size.

Google's use of POWER9 chips in its data centers represents a big vote of confidence in the technology. It's taken a while, but IBM's efforts to provide an alternative to Intel in the data center are starting to bear fruit.