The past several years have been especially tough for Guess? (NYSE:GES). Not only has the entire fashion industry gone through difficult times as competition mounts, but the higher end of the market in particular has also had to endure economic fluctuations abroad while navigating rapidly changing trends in the North American market. Some controversies have also arisen, further calling into question the company's efforts to get moving in the right direction.

Coming into Wednesday's fiscal fourth-quarter financial report, Guess? investors believed that it was about time that the company managed to deliver a solid quarter to celebrate the holidays. The jeans retailer did even better than it and those following the company had expected, and the outlook for the coming year seems brighter than it has in a long time. Let's take a closer look at Guess? and what its latest results say about how it's doing. 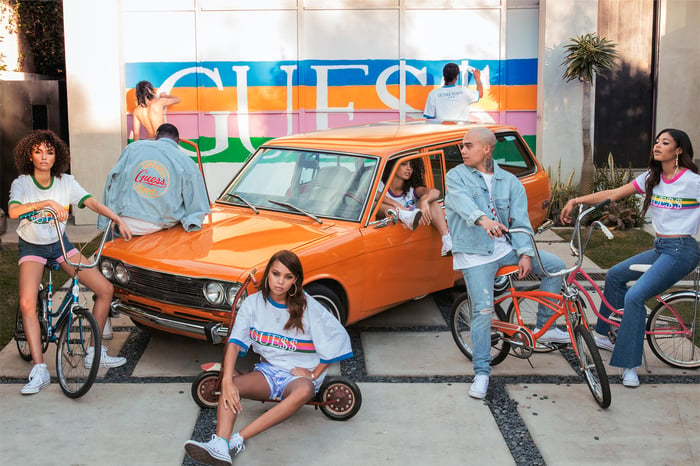 Guess? was able to give a good performance to finish its fiscal year. Quarterly results included a nearly 18% rise in revenue to $792.2 million, which was much stronger than the 11% growth rate that most of those following the stock had expected to see from the jeans maker. Adjusted net income of $51.3 million soared 40% from year-ago levels, and the resulting adjusted earnings of $0.62 per share blew away the consensus forecast among investors for $0.54 per share on the bottom line.

Guess? did take a hit from tax reform measures. The company said that the new tax laws resulted in a one-time charge of about $47.9 million, or $0.58 per share, split almost equally between the negative impact of revaluation of deferred tax assets and the deemed repatriation tax on overseas earnings.

From a fundamental perspective, Guess? continued to see big disparities across its geographical footprint, but some of the downward pressure closer to home eased up a bit. In the Americas retail segment, revenue fell 6% on a 4% drop in comparable sales, which was better than the double-digit declines that the company suffered in the fiscal third quarter. Europe and Asia were once again strong, with each segment seeing 40% gains in dollar-denominated revenue. Comps jumped 18% in Europe and 14% in Asia. The Americas wholesale business turned things around as well, posting a gain of nearly 4% in revenue after having seen declines in recent quarters.

Margin performance for Guess? was mixed. Americas retail operating margin soared into positive territory, with cost reductions due to store closures and rent reductions helping to send the metric up to 6%. Better pricing power also contributed to the solid performance. In Americas wholesale, however, operating margin was down almost 3 percentage points to 14.2%, with Guess? citing higher costs of goods sold compared to revenue. Asia saw operating margin more than double, while Europe stayed close to flat.

CEO Victor Herrero was very happy with how the company finished the year. "I am convinced," Herrero said, "that maintaining the focus on the strategic initiatives I outlined on my arrival at the company in August 2015 is now clearly showing in our financial results." The CEO also pointed to the full-year results as marking a true turning point for Guess? going forward.

Can Guess? keep up the pace?

Guess? expects the good times to continue. As Herrero put it, "I still see a lot of opportunities left in Europe and Asia, where we will continue to allocate capital for superior returns and where we plan to continue growing sales in double digits while also expanding margins." Yet the CEO isn't giving up on the Americas, with hopes to keep controlling costs in an effort to boost profits.

Early guidance for fiscal 2019 was also fairly upbeat. For the first quarter, Guess? sees sales up 11% to 12.5%, with an expected loss of $0.24 to $0.27 per share. Full-year results will show more optimism on the bottom line, as Guess? expects earnings of $0.86 to $0.98 per share on sales growth of 7% to 8%. Those fiscal 2019 numbers are well ahead of where investors expected the company to be by now, pointing to better growth trends ahead.

Guess? shareholders were quite happy with the news, and the stock soared 11% in after-hours trading following the announcement. With high hopes for a turnaround that could already be underway, Guess? believes that this year could bring the success that patient investors have waited a long time to see.