General Motors (NYSE:GM) Cadillac brand has a plan to boost flagging sedan sales, and it involves an old-fashioned solution: a powerful V8 engine. The new engine will make its debut in the big Cadillac CT6 sedan, which is receiving a revamp for the 2019 model year.

In some ways, it's a surprise, given GM's emphasis on electric vehicles and self-driving in recent months. But it's also a reminder that traditional vehicles continue to appeal to consumers -- especially if they're stylish and technically advanced. 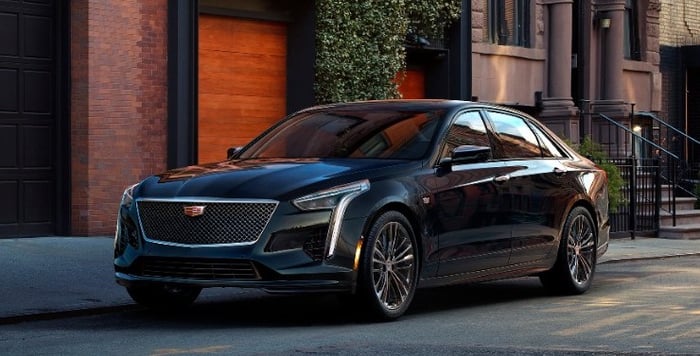 A new V8 engine and new front-end styling are among the changes coming to the Cadillac CT6 for 2019. Image source: General Motors.

Cadillac's history is centered on big, ostentatious sedans with effortless V8-powered acceleration. But this new Cadillac V8 is far from an old-school lump.

It's a brand-new, high-tech design that packs twin turbochargers (and catalytic converters) into a compact package that's expected to generate about 550 horsepower -- with what should be pretty decent fuel economy. It's a 4.2 liter V8 with dual overhead cams (and the two turbochargers) that GM said will make a hearty 627 foot-pounds of torque. 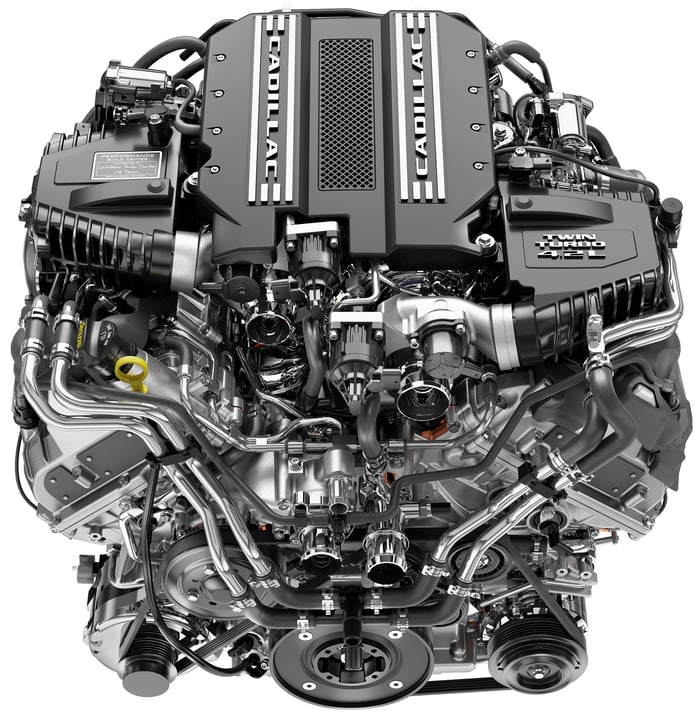 And in a departure from GM's usual practice, the engine will be exclusive to Cadillac. (A related 5.5 liter version may appear in the next-generation Chevrolet Corvette.) It'll be introduced in the big CT6 sedan, which is getting a new "V-Sport" performance trim for 2019 as part of a larger makeover.

A boost for an impressive car with less-impressive sales numbers

But for all of its virtues, the CT6 has been kind of a tough sell in a global market that increasingly favors crossover SUVs over sedans -- and in which Cadillac's brand luster hasn't yet caught up to the huge strides it has made in quality.

Cadillac sold 10,542 CT6s in the U.S. last year. That's not bad -- it outsold BMW's 7-Series -- but it's well behind the roughly 16,000 S-Class models sold by Mercedes-Benz. (Cadillac also offers the CT6 in China. It doesn't break out sales figures by model for that country, but CT6 sales in China appear to have been roughly equal to U.S. sales last year.)

GM is hoping to give its biggest Caddy sedan a boost for 2019. One knock on the CT6 has been its almost too-tame styling, particularly in the front end. GM is addressing that with a new face and taillight design, both of which lift heavily from the gorgeous 2016 Escala show car.

Cadillac's 2016 Escala concept was said to be a preview of the brand's future styling. It may also be a preview of a new top-of-the-line sedan expected around 2021. Image source: General Motors.

The new V8 will be standard with the CT6's new V-Sport performance package. A 500-horsepower version will be optional on some other CT6 models.

Shouldn't Cadillac be working on SUVs, not V8 sedans?

It certainly should -- and fortunately for GM, it is. Cadillac has just one crossover SUV right now, the hot-selling XT5. It'll be joined in the second half of 2018 by a one-size-down model called the XT4. Two more all-new Cadillac crossovers are believed to be in the works.

Cadillac released this "teaser" photo of the upcoming XT4 crossover SUV earlier this month. Cadillac is expected to reveal the XT4 next week, and to begin production this summer. Image source: General Motors.

The XT4 will be unveiled at next week's New York International Auto Show.

The upshot: Slowly but surely, Cadillac is building momentum

GM executives have made it clear that the overhaul and repositioning of Cadillac is a long-term effort, expected to unfold over the next decade. The goal is to make it a major luxury player in China, while boosting the brand's quality, range, and image in order to expand its pricing power both in China and the United States.

The long-awaited XT4 should help give the brand a boost in its home market. GM hopes the changes it's making to the CT6 will give the worthy vehicle a sales boost as well.