Ford Motor Company (NYSE:F) is giving its midsize Fusion sedan an update for the 2019 model year. The Fusion will get some new technology, some styling changes, and a new standard engine, Ford's 1.5-liter turbocharged four-cylinder EcoBoost unit.

At first glance, this may not seem like a big deal for Ford investors. But stick with me here: As we dig into the details, we'll find some things about Ford's update of the Fusion that will help us understand how Ford and its products are changing under the leadership of CEO Jim Hackett.

Ford is giving the Fusion an update for 2019. The styling changes are subtle, but changes like these are unusual this late in a vehicle's life cycle. Image source: Ford Motor Company.

What Ford is changing on the Fusion

Let's start by looking at what Ford is changing on the Fusion for 2019: 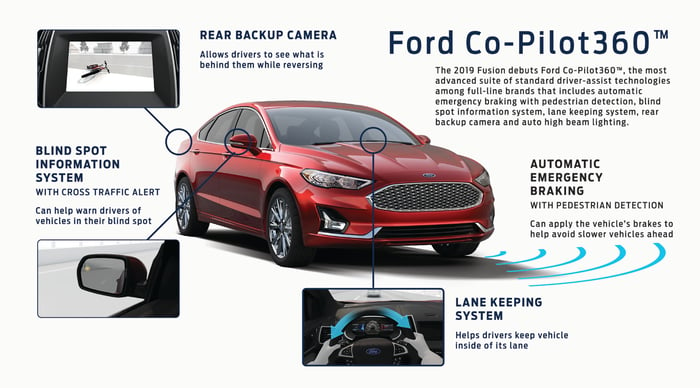 The 2019 Fusion will be the first to have Ford's Co-Pilot360 driver-assistance suite as standard equipment. Image source: Ford Motor Company.

Do you see the pattern in the changes?

It's a nice list of updates, but it's no big deal, right? Look more closely: There are fewer engine choices and fewer options, in large part because some previously optional items are now standard.

In Ford-speak, the number of "orderable combinations" has been greatly reduced on the Fusion for 2019. That will happen to other Ford models as they're updated over the next couple of years.

In a presentation to investors in October, Hackett explained that this is part of a larger effort to reduce complexity at Ford:

We build a lot of [complexity] into our vehicles. The problem was, we really offered too many options. This isn't efficient for businesses. It's a killer for operations, and in fact, customers don't like it. There's a Harvard article called "The Tyranny of Choice," which says they really don't like having too many choices. As you can see on this slide, the Escape combinations will be reduced by tenfold in the next generation. 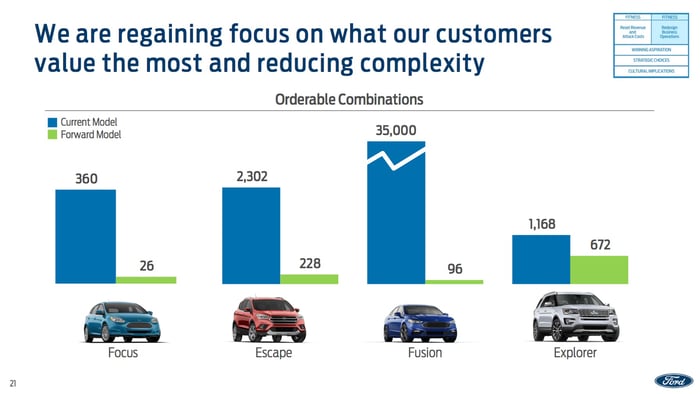 From a presentation given by Ford CEO Jim Hackett on Oct. 3, 2017. Image source: Ford Motor Company.

Hackett argued that reducing the number of orderable combinations will serve customers. But there's much more to it: As Hackett sees it, simplifying the options list will make manufacturing more efficient, reduce material costs (because fewer sets of parts need to be kept on hand), and increase the speed of Ford's product-development process.

If we step back a bit, we can see one more thing that's of interest in this 2019 update of the Fusion. Typically, automakers launch a new model, give it an update after three or four years, and then replace it with an all-new model about two years after the update.

The current Fusion was first revealed in January of 2012, and went on sale later that year as a 2013 model. As you'd expect, Ford refreshed it a few years later, giving it some styling changes and updates for 2017. But here's where the story diverges: Instead of the all-new Fusion you'd expect to see about now, Ford is refreshing the old model again for 2019.

There's no doubt that the Fusion was cutting-edge when it was launched. It was a big-deal product that was a couple of steps ahead of the Japanese-brand entries dominating the midsize-sedan segment. In fact, the Fusion was in such demand that Ford did something unusual: It set up a second assembly line.

But that second assembly line was shut down in 2016. Like many of its rivals, the Fusion's sales have faded as more buyers choose SUVs. The Fusion's age means that its sales have been hit harder than some.

Today, the Fusion is arguably a step or two behind the Honda (NYSE:HMC) Accord and Toyota (NYSE:TM) Camry, both of which were all-new -- not just updated, completely redesigned -- for 2018. It may be about to fall even further behind: Nissan is expected to take the wraps off an all-new version of its Altima at next week's New York International Auto Show.

The upshot: Hackett's talk is turning into action

There isn't an all-new Fusion waiting in the wings, either. Hackett has directed Ford to focus on higher-profit SUVs and to reduce its investments in sedan models. Ford's product plan for the next two years includes five new SUVs and an all-new F-150 pickup -- but no Fusion.

Ford is reducing the cost of building the current Fusion, and it won't have an all-new model any time soon. For fans of the car, that's not good news. But for shareholders, it's a clear sign that Hackett's talk is turning into action -- and bottom-line improvements should be on the way.