By all measures, $525 million is a lot to pay for a company with just $85 million in annual sales. But Extant seems a perfect fit for TransDigm's sometimes criticized -- but so far highly successful -- business model.

Acquisitive aerospace component supplier TransDigm Group (TDG 0.23%) paid a relatively rich six times sales for privately held Extant Components Group, betting that the target's unique position in the supply chain will lead to oversize returns. It is a strategy that has sparked significant criticism of TransDigm in recent years, but also one that so far has delivered handsomely for investors.

What TransDigm sees in Extant

TransDigm said March 19 it would pay $525 million in cash for Warburg Pincus-owned Extant, a maker of aftermarket products and provider of repair and overhaul services for the commercial aerospace and defense markets. The company is expected to generate $85 million in sales in fiscal 2018. So the price is a premium to the five times revenue United Technologies is paying for the much larger and much more diversified Rockwell Collins, and well above the 2.5 times sales average multiple that publicly traded commercial aerospace companies currently trade for.

Extant is attractive to TransDigm due to its strategy of exclusively licensing or acquiring proprietary designs from aerospace and defense original equipment manufacturers (OEMs), positioning the company as a one-stop shop for hard-to-find replacement parts for planes and other equipment throughout the useful lives of the aircraft. The company owns or exclusively licenses more than 2,500 assemblies and sub-assemblies on more than 70 active platforms, including the F-16, F-18, F-15, and C-130 military aircraft; Boeing's (BA -1.59%) 747, 757, and 777 commercial aircraft; and a range of business jets.

OEMs historically have been willing to outsource continued manufacture of replacement parts to third parties to focus their resources on new designs. Overall, Extant expects to derive about 80% of its revenue from the aftermarket, with nearly all of that total coming from proprietary and sole source products.

This is a model TransDigm knows well, having acquired more than $1 billion in sales from proprietary aftermarket businesses in recent years. TransDigm's strategy is to operate those businesses on its larger manufacturing base and its global distribution platform, allowing the company to extract better returns on the business than the target can generate on its own. The company boasts profit margins akin to those of software makers. In 2017, it generated an operating profit margin of more than 40%.

"This unique model fits well with our proprietary and aftermarket-focused value generation strategy," TransDigm chairman and CEO W. Nicholas Howley said of Extant in a statement. "We anticipate attractive private equity type returns on this acquisition."

TransDigm's model is not without its critics. Notably, short-seller Citron Research in January 2017 referred to the company as "the Valeant of the aerospace industry," saying that the company relies on its ability to buy up companies, fire employees, and raise prices "egregiously."

The company has a substantial debt load thanks to all of those acquisitions -- $11.76 billion in total debt as of year's end -- and Citron has argued that its business model unfairly overcharges the Pentagon and U.S. taxpayers to generate its profits.

Citron's report caused a short-term sell-off, but TransDigm shares have managed to shake off those worries and today trade about 23% above their price immediately prior to Citron's reports. Company bulls argue that the short-seller vastly overstated TransDigm's business with the U.S. government and failed to comprehend the demand for high-quality spare parts on aircraft that is responsible for TransDigm's impressive margins.

Even if Citron's criticism has failed to stick, there are dangers to investing in TransDigm. Rollups by their nature are risky, and the company's ability to pay down the debt it takes on acquiring these businesses would be hampered if revenues don't come in as planned. Meanwhile, new competition is on the horizon. Boeing has voiced its intention to expand aggressively into the aftermarket, potentially making it more difficult for TransDigm to continue to license or acquire spare part designs.

TransDigm is also not cheap, trading at 25.29 times trailing earnings and 4.54 times sales. 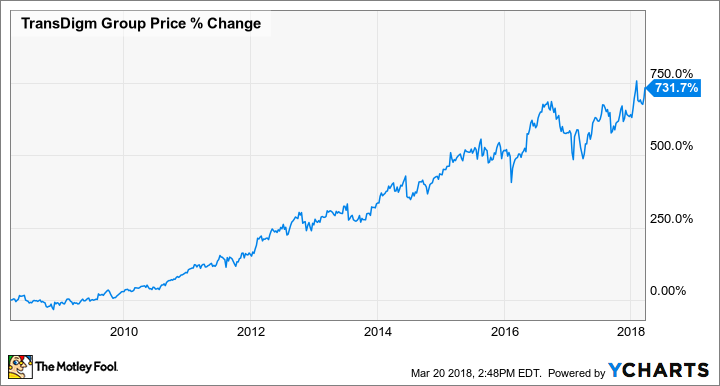 On the positive side, TransDigm is among the best-positioned aerospace suppliers for when the commercial aircraft buying boom finally fades, and looks poised to do well in a downturn should airlines decide to extend the life cycles of existing jets instead of buying new. And long-term holders of the company have been richly rewarded, with shares up more than 700% over the past 10 years.

Given TransDigm's valuation and the long-term risks, investors have reason to be cautious about buying in at these levels. But this longtime holder sees no reason to sell.

TransDigm Cleared for Takeoff After Pentagon Closes Probe Into Pricing
420%