This gold-focused streamer isn't the cheapest option, but its mix of gold exposure and dividend record might be enticing to income investors.

Streaming and royalty company Royal Gold, Inc. ( RGLD -0.60% ) offers investors a different way to gain exposure to precious metals like gold and silver. The stock has easily outperformed peers Wheaton Precious Metals (NYSE: WPM) and Franco-Nevada Corp ( FNV 0.11% ) so far in 2018. Looking at the disparate stock performance, it's reasonable to ask if Royal Gold is a buy today -- or if you should be considering other options.

A different type of gold stock

Royal Gold, Wheaton, and Franco-Nevada are all streaming and royalty companies. Essentially, these companies provide cash up front to miners for the right to buy silver and gold, and other commodities, at reduced rates in the future. This gives these companies an edge over miners by locking in wide margins throughout the commodity cycle. 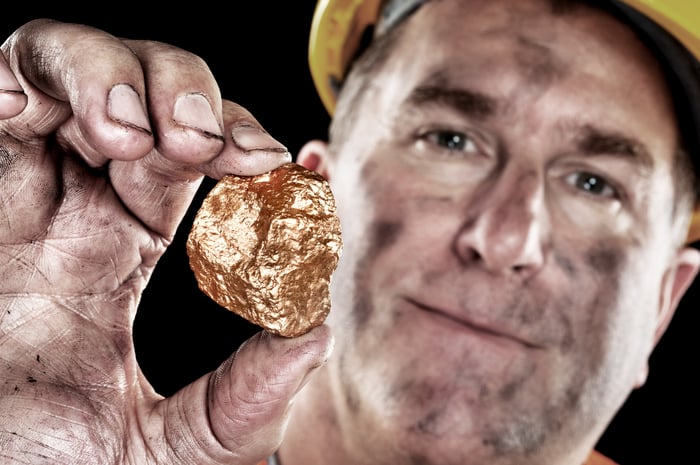 In addition, it removes the inherent risks related to running mines from the equation, since Royal Gold and its peers are simply financial counterparties. And, because they are more like specialty finance companies that get paid in gold and silver, streaming companies have more diversified portfolios. Royal Gold, for example, has investments in 194 assets, 39 of which are working mines. Most miners only run a handful of operating mines.

The consistency of the streaming model, meanwhile, has helped Royal Gold amass a dividend record that is quite impressive -- it has upped its annual dividend for 17 consecutive years. I don't know of a miner that can match that. It's also a more impressive record than that of either Franco-Nevada, which has a decade-long streak of dividend hikes, or Wheaton, which has a variable dividend tied to corporate performance. Royal Gold's yield is 1.2%, Franco-Nevada's is 1.3%, and Wheaton's is 1.8%, though Wheaton's yield could change quickly if the company's business performance deteriorates.

So, you have a solid backdrop for why you might want to own Royal Gold over a miner. And, if you are income investor, that dividend streak might entice you to consider this stock over its peers despite the lower yield. But would you be getting a good deal?

Holding up, not excelling

Royal Gold's stock has, essentially, gone nowhere so far in 2018. However, that's much better than Franco-Nevada and Wheaton, which are both down more than 12%. Part of Royal Gold's strong showing has to do with the fact that gold has generally been outperforming silver over the past year or so. Royal Gold has more exposure to this metal than either of its peers. In fiscal 2017, the yellow metal made up 85% of its revenues. At Franco-Nevada, that figure was roughly 70% while Wheaton's production is the most heavily weighted toward silver, at 55% of its output. 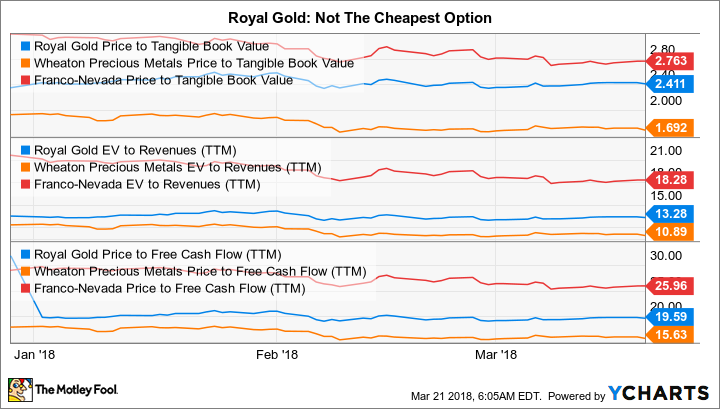 So, if you're looking for the most gold exposure possible, Royal Gold is the way to go, here. Adding to the allure, Royal Gold has a number of large investments set to start adding to its gold flow in 2018 and 2019. So, the production outlook appears promising, too.

Royal Gold, then, isn't the cheapest option if you're looking at a precious metals streaming company -- that would be Wheaton. However, it isn't the most expensive, either.

If you're specifically looking for exposure to gold, then Royal Gold is a strong candidate based on its heavy focus on the metal. It also has amassed the longest streak of annual dividend increases. And while it isn't the cheapest of the large streaming companies, it's cheaper then Franco-Nevada. Investors looking for a good deal should probably do a deep dive on Wheaton. But for dividend investors looking to add some gold to their portfolios for diversification purposes, Royal Gold still looks like a solid option even if it isn't a spectacular bargain.